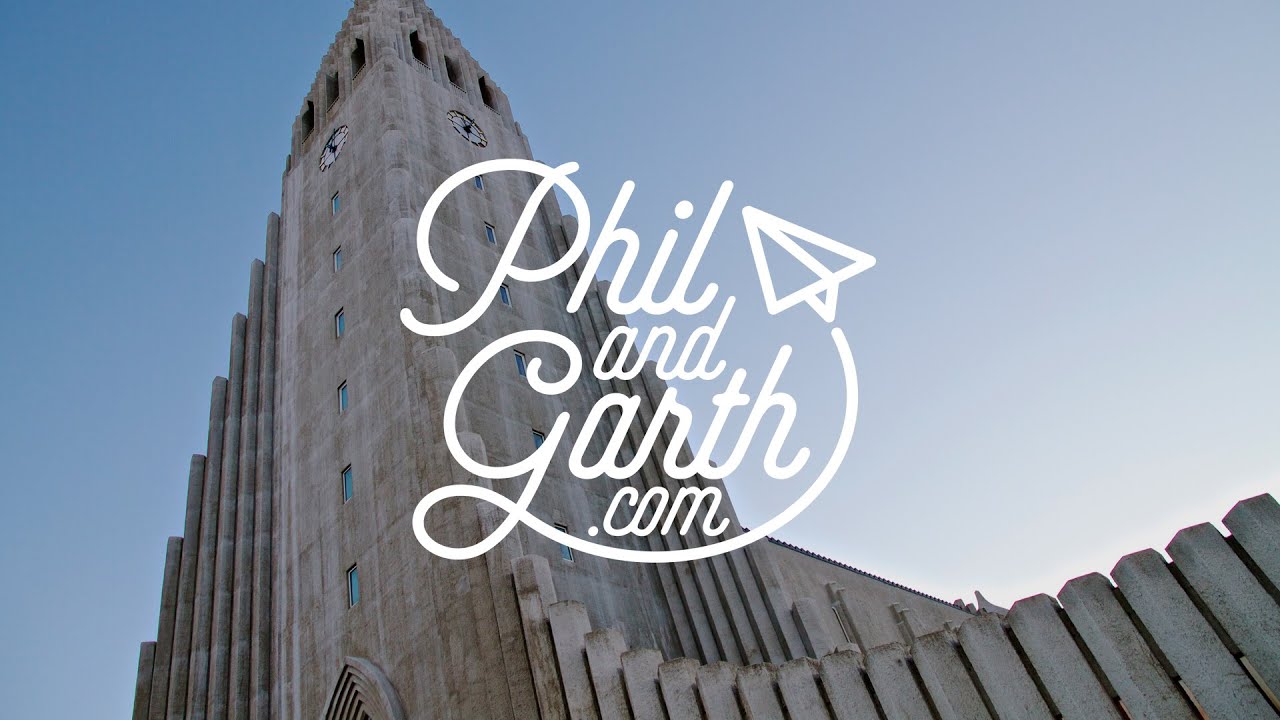 We decided to try Reykjavik Iceland’s capital city as it’s so close to the UK, so snapped up some bargain flights and decided to book everything else through a travel agent.  We chose and paid Pink Iceland to book our accommodation, tours and transfers, and only have only great praise for them.  Our whole holiday was well organised, everything worked like clock work, and they gave us great advice and recommendations, without being crazy expensive. 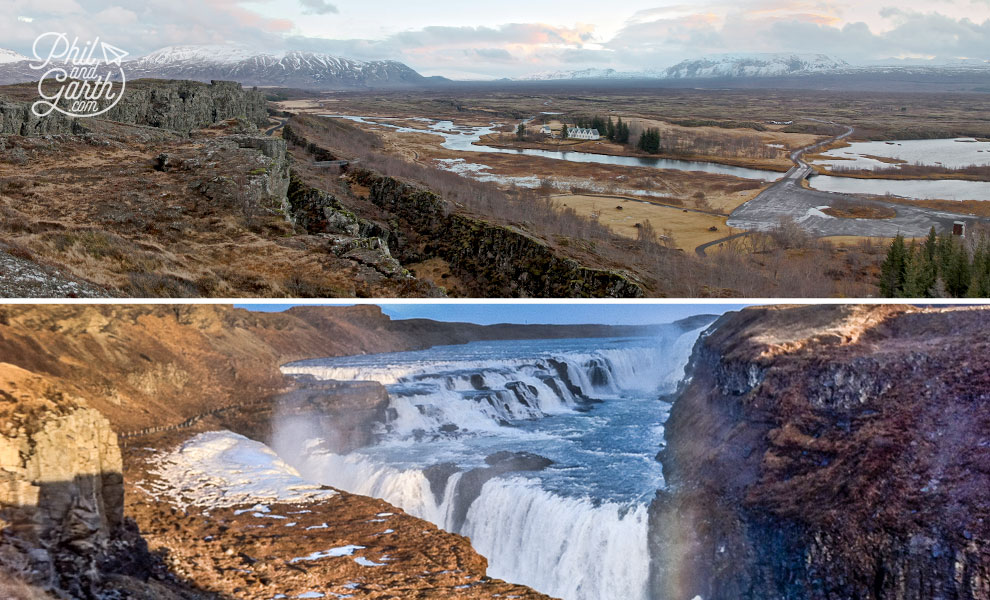 We’re so glad we took their Pink Golden Circle tour with a personal guide, Gudni who was great and we didn’t need to worry about a thing. We were collected from our hotel and delivered back to a restaurant that was recommended during the day, Birna from Pink Iceland even booked a restaurant reservation for us while we were on the tour. Gudni was a fantastic and a knowledgeable guide, explaining things like Iceland’s unique geological position set between two continental plates. We enjoyed the famous and incredible sights of Geyzir – the amazing sprouting hot spring,  Gullfoss Waterfall and Thingvellir National Park. On the way Gudni treated us to morning snacks and and an Irish Coffee on our tour.  We realised it would be very easy to hire a car and do all the sights yourself, so we’d probably do that next time, but having Gudni did made it fun! 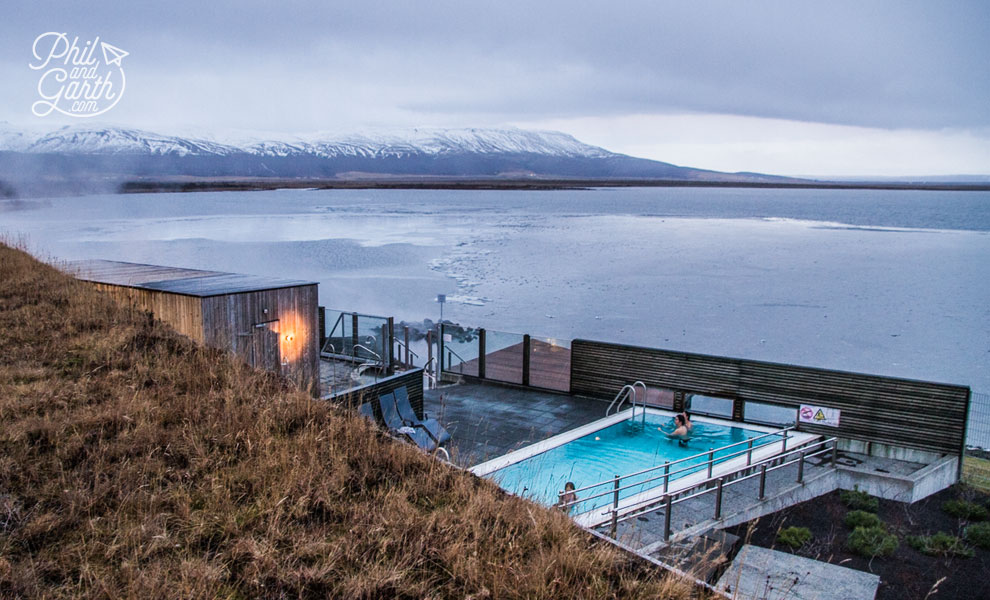 The whole day was fantasic and finished off with a relaxing hour or two at the Laugarvatn Fontana Spa.  It’s the perfect place to recharge your body, mind and soul set against the dramatic lake and mountain scenery. Gudni even threw in an Icelandic geology lesson for us! The steam rooms are built directly above some hot springs, Scorchio!!! We really wanted to see the Northern lights while we were in Iceland, so we deliberately booked in winter for the best conditions. We paid for an Aurora hunting tour with Reykjavik Excursions, which wasn’t expensive – a big coach that drives everyone around searching the skies.  Sadly on the first night nothing was to be seen, you can check viewing conditions with an aurora forecast supplied by the Icelandic Met Office, we both got slightly obsessed with this website during our stay! The company offers another free trip if you are unlucky, so the following night we set off again, and we struck gold or should that be green!  After just a short drive outside the city centre, we could see a really faint green streak in the sky.  Garth was incredibly giddy as we all disembarked the bus next to a farmer’s field. The green streaks of light were still faint to the naked eye and we assumed this is what the northern lights must look like, and what you see on TV or photos is much more exaggerated, so we set up our tripod and had great fun messing about with long exposure pictures.  And yes, the photo looks like we are standing in front of an airport billboard, but the shadows around us are from taking a 30 second exposure, honest we’ve not photoshopped ourselves in!

After a good hour we felt delighted we’d seen the aurora borealis and could tick it off our bucket list. Then all of a sudden there were screams and gasps of delight as this time the whole sky lit up with dancing patterns of light!  The colours were not faint, but really bright and dancing around, it was a fantastic light show!  Everyone was scrambling around for their cameras and iPhones, Garth decided not to, and we both just took in the surprise moment, which was the right decision as it only lasted for a minute or so.  We felt so lucky and privileged to see such an amazing light show, a real once in a lifetime experience, thoroughly recommend it! We also stayed at Frost and Fire in nearby Hveragerði – a relaxing and romantic place with hot tubs overlooking the river and mountain landscape dotted with puffs of steam everywhere from the hot springs. One of the hot tubs was too hot for us, but the geothermal heated pool we could have stayed in all night.   It’s also incredibly romantic looking up at the night skies in freezing cold temperatures, but relaxing in the warm pool or hot tub. 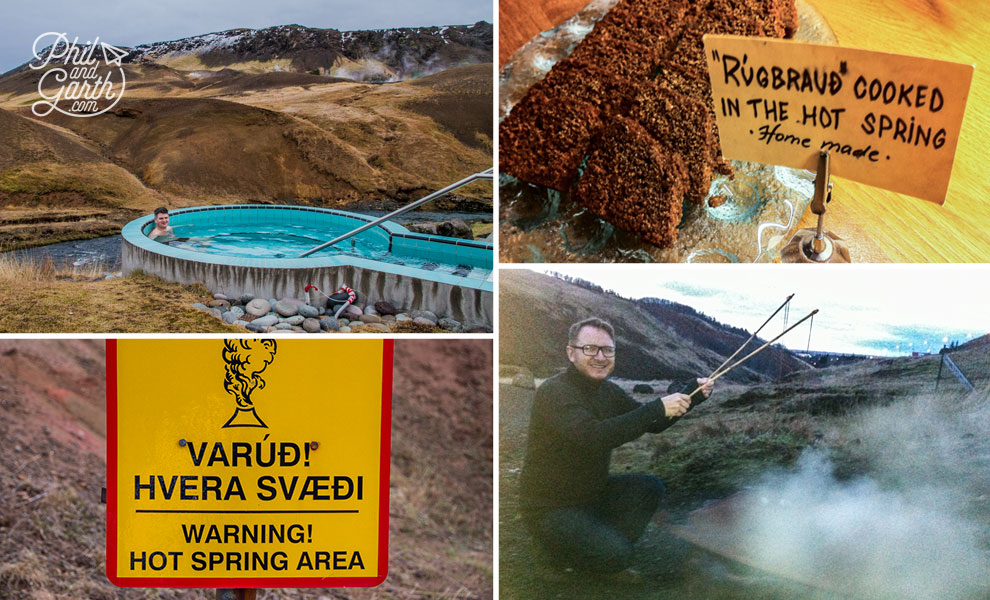 And why don’t they tell you on the website that you can cook your own breakfast eggs in the hot steamy spring just outside the dining room window! – that was great surprise and you must do it, although when we were cooking our eggs – 9 mins was a bit too short I’d recommend keeping it in for 10!

Whilst in Hveragerði we also took in a hike in the mountains for a swim in the hot spring river. Garth and Phil in Hveragerði

We paid for a Geothermal Hike with Iceland Activities, a family run business based in Hveragerði. Anders picked us up directly from the chalet at Frost and Fire. He took us to the start of the walk having collected a fabulously huge picnic on the way. Anders immediately worked out our level of fitness (very low! We’re not really big walkers!) and perfectly worked out the pace for the hike from that. It’s a hike that we would never have taken ourselves, but we both felt fully confident with Anders leading the way. Phil taking a dip with lunch in the hot spring

After an hour and a half or so, we stopped and stripped off to our trunks and jumped into the hot spring, it was amazing the juxtaposition of soaking in hot water next to snow covered mountains was amazing and words don’t do it justice. 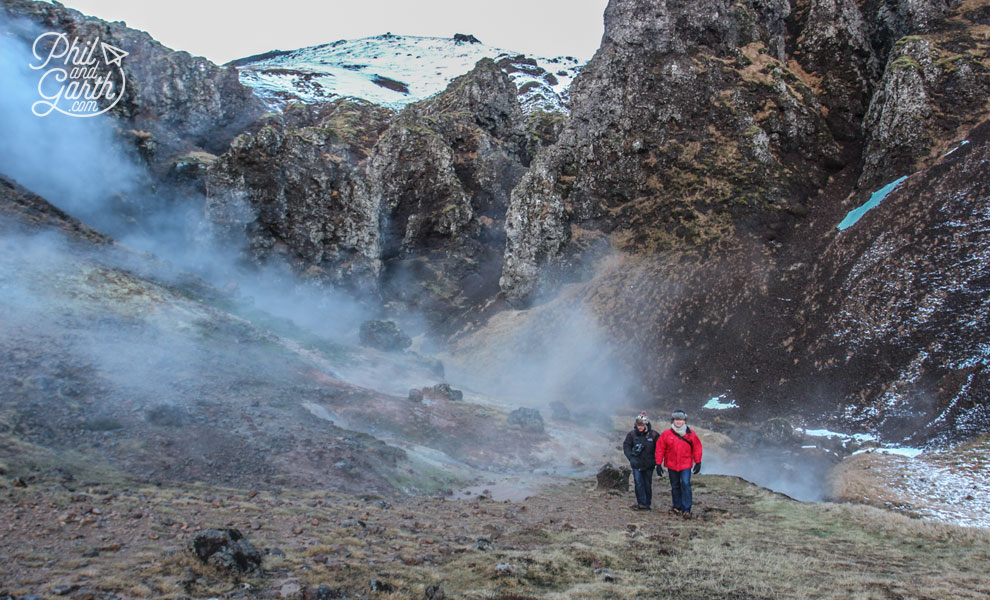 Garth and Phil in Hveragerði

The scenery was incredible, with waterfalls and dozens of hot springs dotted all over the landscape, some of them would be too dangerous to swim in, as they would be too hot and scold you, having Anders knowledge of where to swim in the best temperature was invaluable. 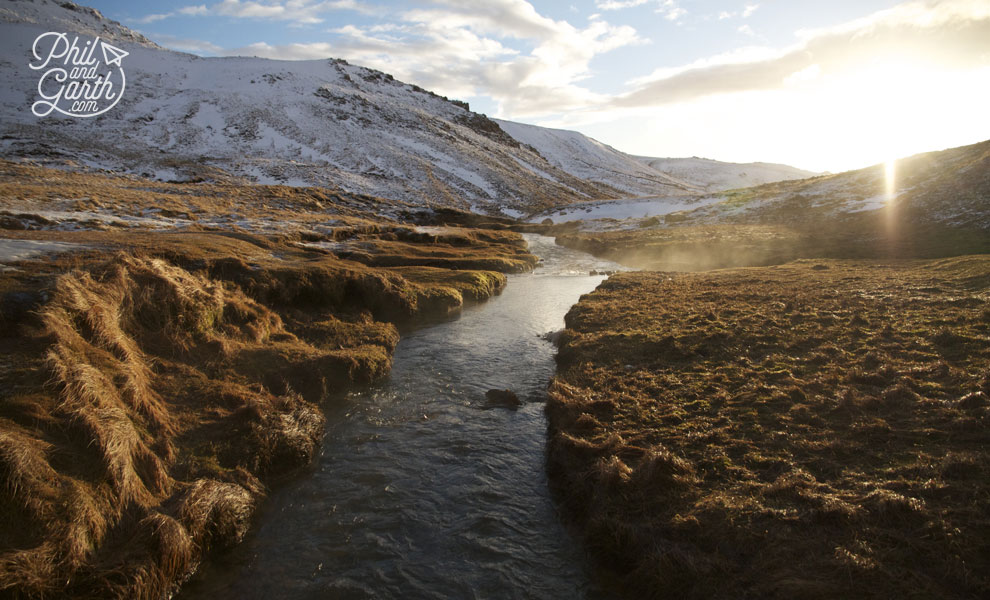 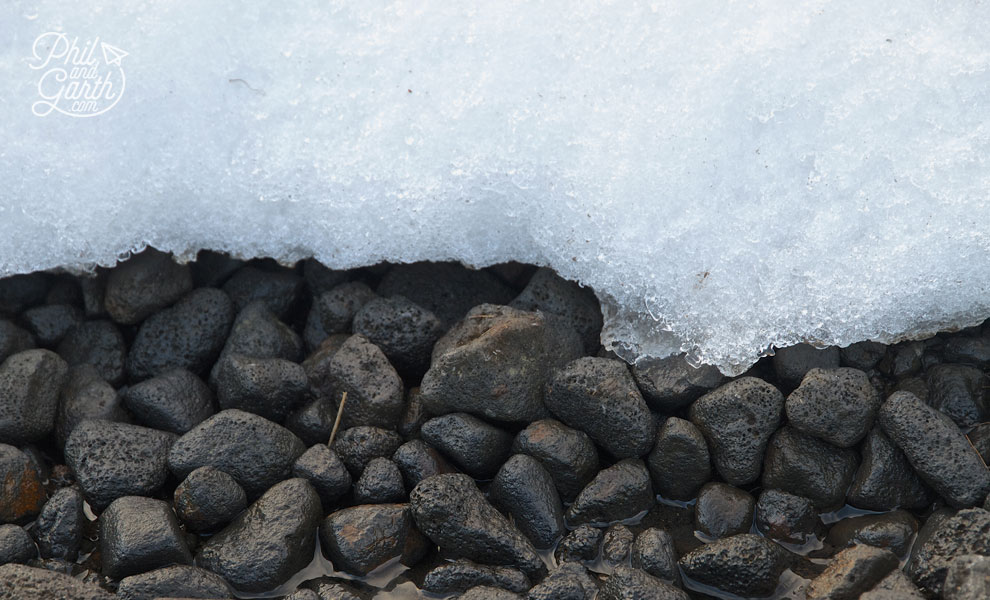 The snow meets the hot water

When we got home Anders sent us loads of photos that he’d taken of us on the walk – what an added bonus! 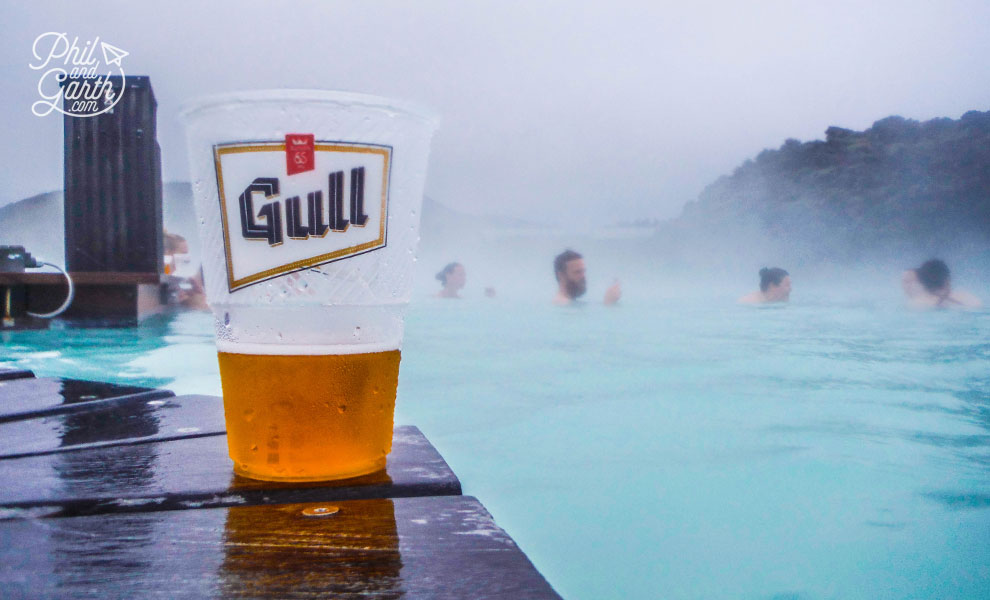 Relaxing at the Blue Lagoon 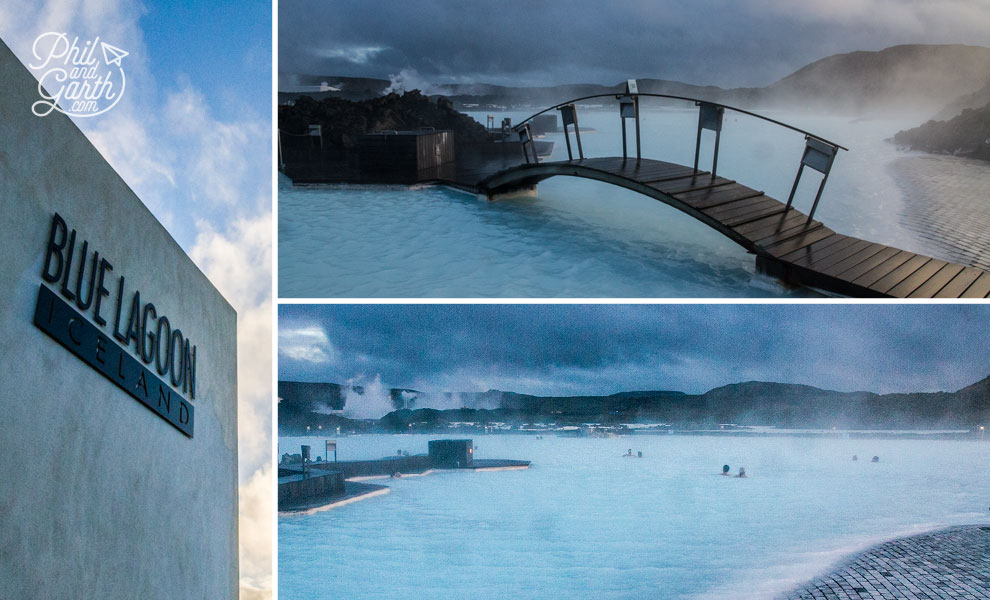 So you can’t visit Reykjavik without visiting the iconic Blue Lagoon it’s an incredible sight, and Iceland’s most popular attraction too.  A massive man-made lagoon set amongst a sci-fi looking black lava field.  The hot water is actually seawater and heated by the Geothermal power station next door, unlike the natural hot water springs all over Iceland.   It’s not toxic, instead rich in minerals like silica and algae that gives the water is distinct milky blue colour. Going into the water for the first time is like entering a lovely hot bath!  and it’s so relaxing!  combine that with the swim up bar, perfection!   As you relax with your beer, you can cover yourself in the free silica mud, the water is also said to be therapeutic too for conditions like Psoriasis. 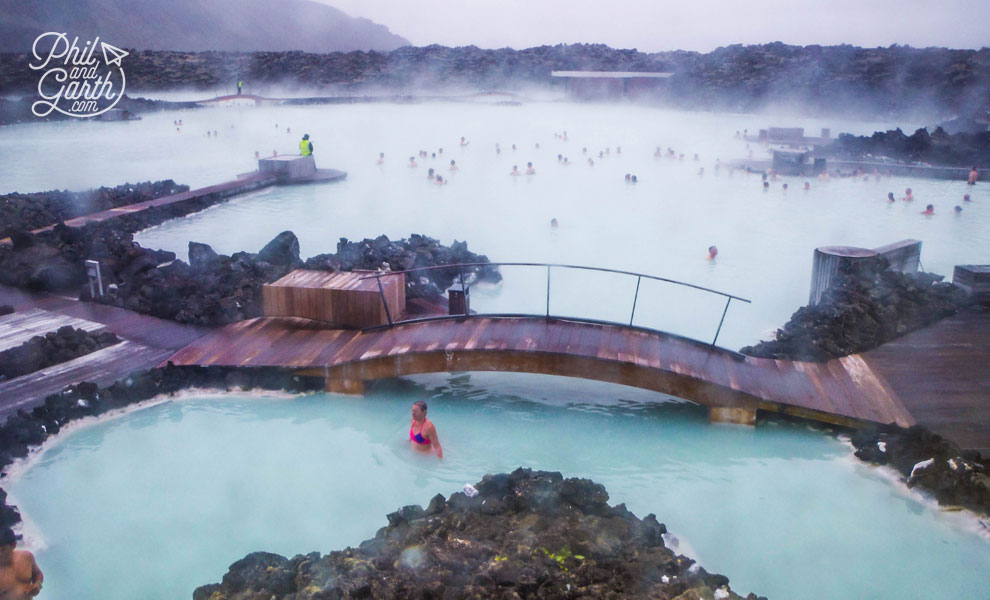 TIPS – It’s really close to the airport, so our recommendation is combining your flight in or out of Iceland with a trip here, as it’s about 50 minutes to Reykjavik city centre, we’re going to do this for our next visit.  You also have to pay what seemed like a lot for a towel & robe so you might think about taking your own. We ate yummy food every night in Reykjavik, here’s our 3 favourites:  Icelandic Fish & Chips – a charming cafe style bistro with reasonably priced menu.  Ok so it’s not like English fish and chips, as they don’t sell chips, but lovely potatoes, you must try their Skyronnaise dips too – yummy. Fiskmarkaðurinn  (Fish Market Restaurant) uses the freshest local catch, that is beautifully presented. We went for Pan Fried Flounder with home made pesto and Grilled Blue Ling, we had no idea what they were going to like, but as we say when we eat abroad, what’s the worst that can happen! The atmosphere inside and the design of the place is also incredible making for a fantabulous evening! 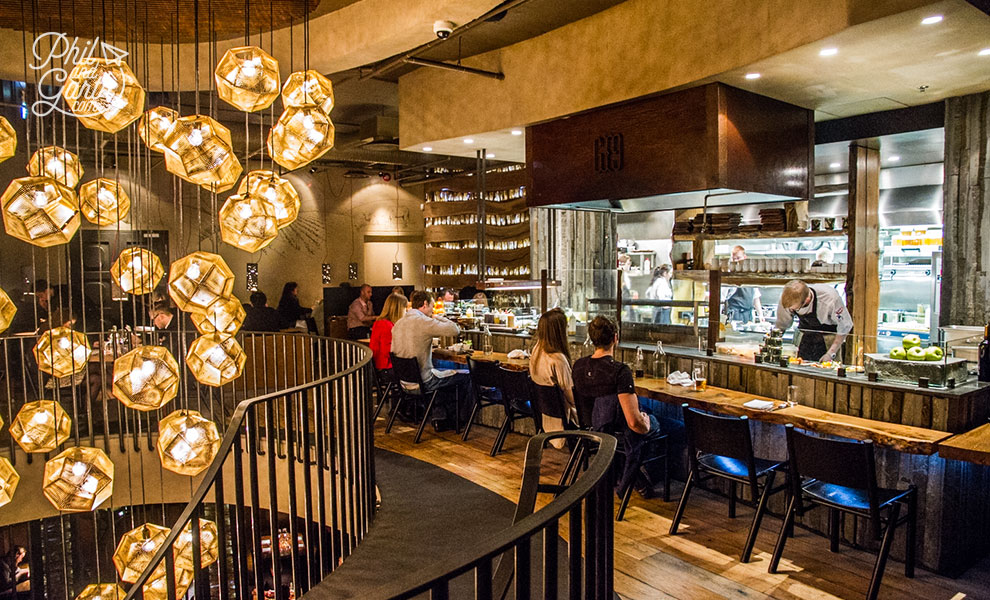 As the Fish Market was so good, we tried their sister restaurant Grillmarkaðinn  (Meat Restaurant) It’s hip and on the expensive side, but are we fabulous?!  We went for the chef’s tasting menu, which included eek… Smoked Puffin and Minke Whale, which Garth wasn’t particularly happy about, but it did taste fantastic. Check out the way buildings are decorated in the city centre 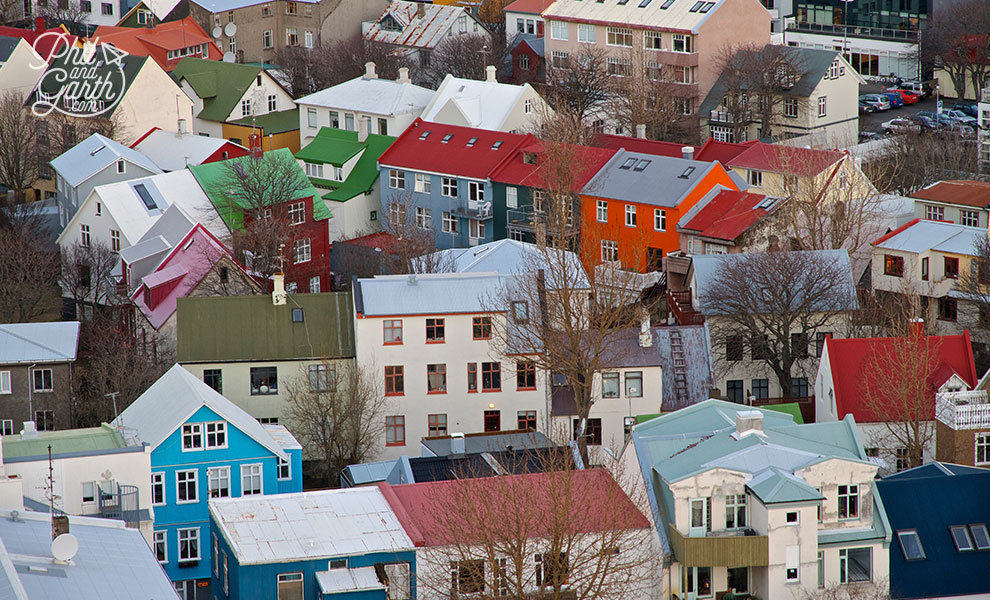 Ok so sometimes we are a bit snobbish when it comes to travel, we’ve never understood people who say they always go back to the same hotel and country every year, why do that when there’s a whole world to explore?  Well we finally get it with Iceland. There’s something about it that’s hard to describe, perhaps its the beauty of the dramatic volcanic landscape,  its big skies or it feels so alien, yet it’s so close to home?  Whatever it is we’ve already booked again for a second trip to see the South of the island. Did we mention there are hardly any people, so you’ll have the whole place to yourself!  – almost!  Iceland’s population is a tiny 320,000. Iceland has been on my bucket list for the longest time, and after looking at these pictures and reading this post it makes me wanna go so much more now. Also really want to go to the Blue Lagoon.. I love warm water. Thanks for sharing this post!

Iceland is very high on the list and I can’t wait to explore it! Hiking around the glaciers and waterfalls will be right up my street and relaxing in the Blue Lagoon and thermal springs will be great too! I think renting a car would be a great way to get around too – are places quite well signposted?

You won’t have any problem getting around by car, it’s easy. But if you are travelling in the winter then snow and severe weather is an issue, as high roads can be closed

So glad you got to see the Northern Lights, they’re just incredible. Killer photos as usual, you make me want to go back right now (in truth I always want to go back). I didn’t do any of the geothermal things, but they certainly look interesting. I have to say I found the Blue Lagoon a bit overhyped but maybe I just wasn’t in the mood. Take me back!!!

Wow Iceland really is beautiful!! I have always wanted to go and your photos make me a lil jealous 😉

Having grown up in England I’ve no idea why I still have not visited Iceland yet – It’s really not that far away! I met another travel blogger a couple of weeks ago who rated it as her top place to travel in the world. The places look fantastic and my girlfriend would love the hot springs. The northern lights look cool as well…almost too fake to be real.

I want to go to Iceland so so badly, it looks so magical! It sounds like you had a great trip, and your photos are stunning! Thanks for sharing!