Trip Of A Lifetime to Beijing & The Great Wall Of China 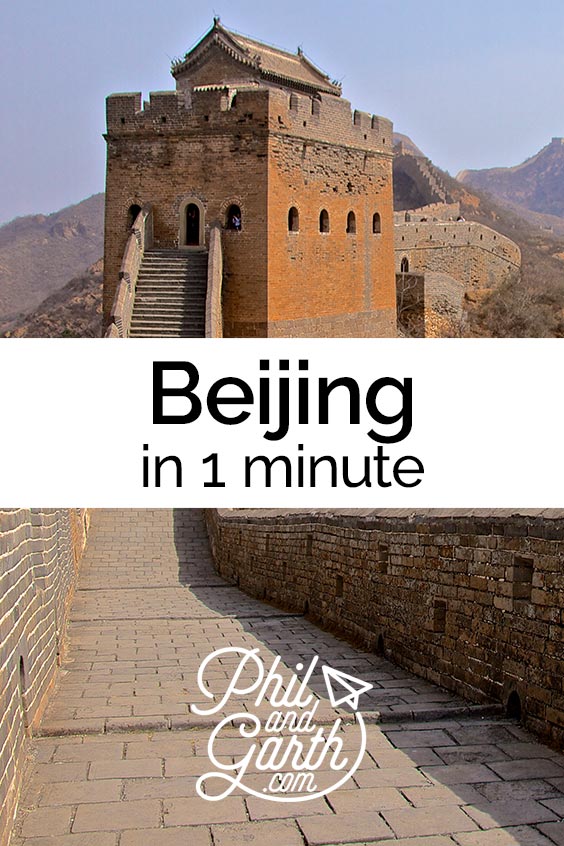 We decided to take a self guided tour and adventure across China by plane and train. You really need months to appreciate it, as it’s such a huge country, but being time poor, we tried to squeeze it all in just over a week!  After months of meticulous planning by Garth, Beijing was our first stop on our grand tour of China.  A huge historic city of imposing architecture and history.

So out to Beijing we ventured feeling very excited, not knowing what to expect. We didn’t bother with public transport as taxis are so cheap and walking between places is easy.  We started in Tiananmen Square, where it immediately felt quite oppressive with dozens of security guards and the imposing communist buildings set against a surreal sky.  It was quickly apparent how poor the air quality is in Beijing, the twilight looking sky was filled with smog.  Everyone seemed to be wearing face masks, apart from us!

Then we noticed all eyes were on us – not just the security guards but Chinese tourists who were taking pictures of us.  Despite the language barrier lots of people gestured for a photo with them, which we obliged, we realised it was because they probably have never seen any westerners.

Walking up to the Gate of Heavenly Peace with its iconic Mao portrait we were reminded if its violent past, as dozens of Chinese tourists scrambled and jostled for a place to take their best photo. As we walked through the gate to The Forbidden City it’s worth noting it’s closed every Monday. Sadly Monday was the day we were there!

Phil & Garth at the Gate of Heavenly Peace

The exterior walls of The Forbidden City

We the interior of the Forbidden City closed we walked around the outside of the walled city to nearby Jingshan Park and watched the locals exercise and admired old peony trees in the gardens – the biggest collection in Beijing.  The peonies were a refreshing contrast to the plastic flowers that fill flower boxes around the city streets –  we did a double take when we first saw them!

Inside the park we climbed the steep path all the way to the top of Jingshan Hill to The Pavillion of Eternal Spring, which has remarkable views of the Forbidden City (and the smog).

Plastic flowers on streets of Beijing

View of The Forbidden City from the top of Jingshan Park

The Temple of Heaven

Our next stop was The Temple of Heaven – another must see beautiful landmark sight. It’s a collection of ancient buildings (from the Ming Dynasty 1368-1644) situated in Tiantan Park. The main building is The Hall of Prayer for Good Harvests and has a magnificent colour palette of red, gold, blue and green. This is where Emperors from the Ming and Qing dynasties would visit to pray for good harvests.

The park itself is worth spending some time like we did.  The immaculate gardens are vast with rows of ancient Cypress trees lined in perfect symmetry. We saw a small crowd gathered around one tree in particular and taking photos – we took a look ourselves and discovered it was called the ‘grandfather’. A 500 year old Cypress with dragon like branches winding around each other resembling nine dragons.

Garth at The Temple of Heaven

The Hall of Prayer for Good Harvests

Jinshanling – The Great Wall of China

The following day we embarked on a day trip to Jinshanling, 3 hours north of Beijing.  The tour we had  booked came with a private guide for the day who came with a separate driver to see The Great Wall of China. Even though you can visit the wall at Badaling which is only about an hour from the centre of Beijing, this is where all the tour group buses go so it’s incredibly busy – an estimated 75% of tourists go here. We wanted to hike the wall – restored and unrestored – and see the less touristy side, Jinshanling is the place to go as it’s more remote and set against a stunning mountainous backdrop.

It’s was awe inspiring sight as we took our first steps up to the top, we were confronted with the vastness of the wall as far as your eye could see, along the high mountain ridges far away in the distance to right back where you are standing.  Jinshanling is incredibly popular with photographers and it’s easy to see why.

We spent around 4 hours hiking the wall. There was plenty to discover along the route, including beacon towers and battlement walls with shooting holes.  Eventually we reached beyond the restored section and started to climb the unrestored parts. Some of these spots were very steep, and rough, with sheer drops, so you need to take extra care where you step, but it’s not that difficult.

Garth & Phil on The Great Wall Of China

Jinshanling The Great Wall of China

Close up of the wall with some graffiti

Interestingly a couple of ladies spent hours following us on our hike, when we stopped they stopped! We guessed they may have been poor and trying to earn some money, but they didn’t bother us at all until we walked back to the car park, where they tried to sell us calendars and T-shirts.  Just for their sheer endurance of staying with us for hours we bought some postcards as a small token of thanks.

Other Attractions of Beijing

We stayed at the Double Happiness Courtyard Hotel for a couple of nights, and we were so glad we did.  The hotel is central, not easily found as it’s in an old ‘Houtong’ neighbourhood.  Just outside the hotel we could immerse ourselves in daily local life – an opportunity not usually available at a major hotel. Inside the hotel you felt like you had stepped back in time, with its traditional Chinese courtyard and traditional interior decoration. Evenings were particularly pleasant sipping the local Yanjing Beijing beer in the ambient courtyard, lit by red Chinese lanterns. As we overlooked the tiled rooftops we felt like we were in a movie scene from Crouching Tiger. The breakfasts were also stunning and plentiful – traditional Chinese with some western dishes.

Our final stop in Beijing on our last night, we headed to the enormous Beijing West Railway Station to catch our overnight sleeper train to Xian.  Getting into the station proved to be interesting, as you can’t just walk in like railway stations in the UK, as all your documents approved by security staff.  No one spoke English, so it was a little difficult trying to work out what they wanted to see, turned out they didn’t really want to check the foreigners, just the locals, big brother in action?
Continue reading about our next stop – Xian

Garth & Phil at The Temple of Heaven

Chengdu Attractions – 5 Best Things To Do In 1 Day

Journey to Xian’s Army of Terracotta Warriors from Beijing

What a great post. I can’t imagine trying to pack a trip across China into a week or two – it’s just so big! It seems like we could easily spend a month exploring Beijing…if we only had the time! Thanks for the alternative places to stay (that courtyard looks SO peaceful!) and see The Wall. As always, great pictures, gents!