TRAVEL INSPIRATION
15 UNESCO World Heritage Sites You Should Visit
The Best Places To Travel By Month
20 Ways to Collect and Display Travel Souvenirs
Phil and Garth > Destinations > Asia > Vietnam > What are the best sights to see in Ho Chi Minh City?

What are the best sights to see in Ho Chi Minh City? 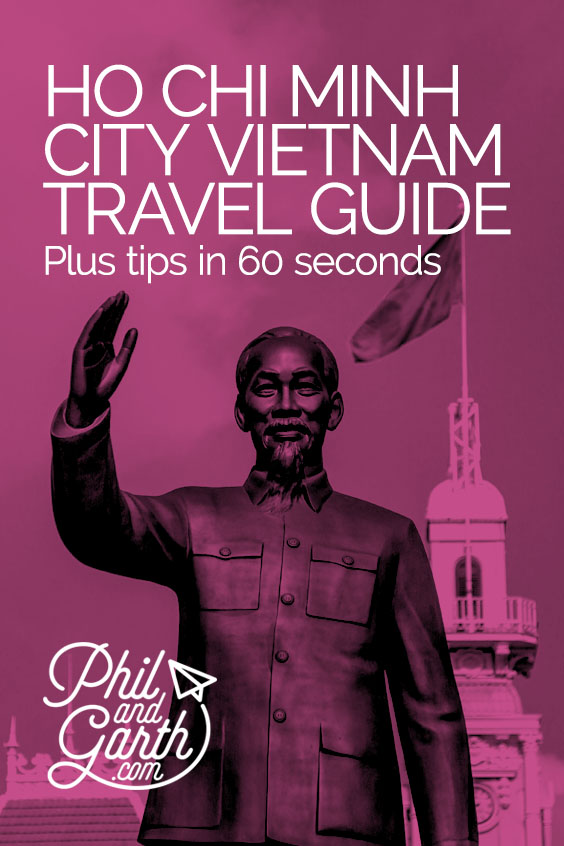 After a short but lengthy delayed flight from Da Nang the final destination on our tour of Vietnam was Ho Chi Minh City. It was previously called Saigon by the French until the country was reunified with North Vietnam in 1975.  But everyone from locals to tourists still seemed to call it Saigon, which is what we did.  Exiting the airport feels like you are right in the middle of the city centre, and then it hit us, oh my goodness, more heat and humidity! it just kept getting hotter the further south we went.

A City of Motorbikes

Saigon is Vietnam’s largest city with a population of 10+ million. It’s a sprawling metropolis and the business centre of Vietnam and it felt like chaos, as hundreds of motorbikes are just everywhere, sometimes we couldn’t see any gaps in-between the traffic, it’s crazy! High import taxes means cars are only for the wealthy, so everyone has bikes, all of them are Honda. Be prepared, it takes a long time to move small distances there’s no underground tube trains, so you’ve no choice but to travel by road. Sometimes it was quite mesmerising watching the traffic as you can begin to see patterns like a slow flowing urban river.  We even saw bikes using the pavements to avoid sitting in the traffic jam! 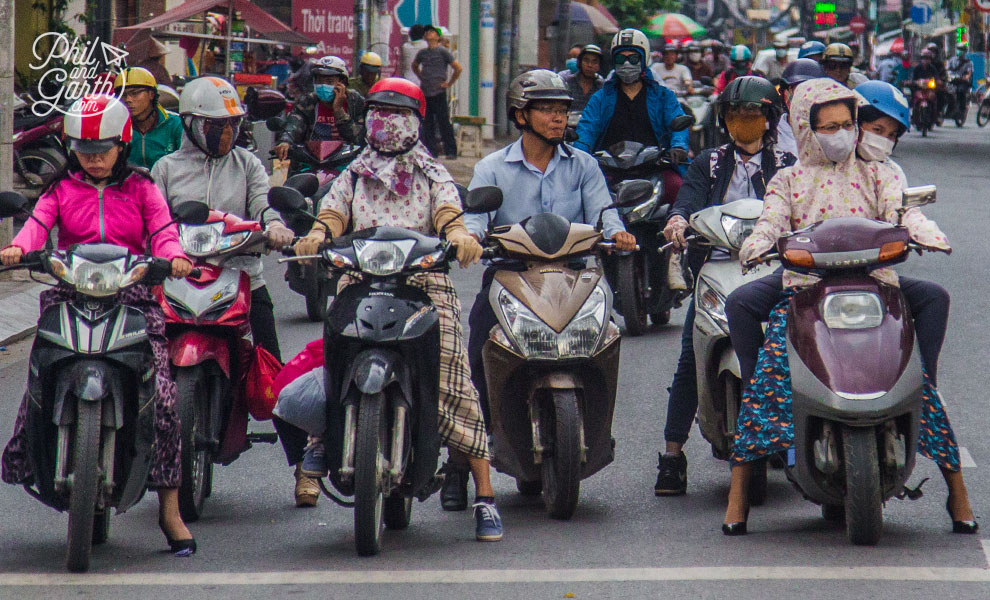 A city of motorbikes 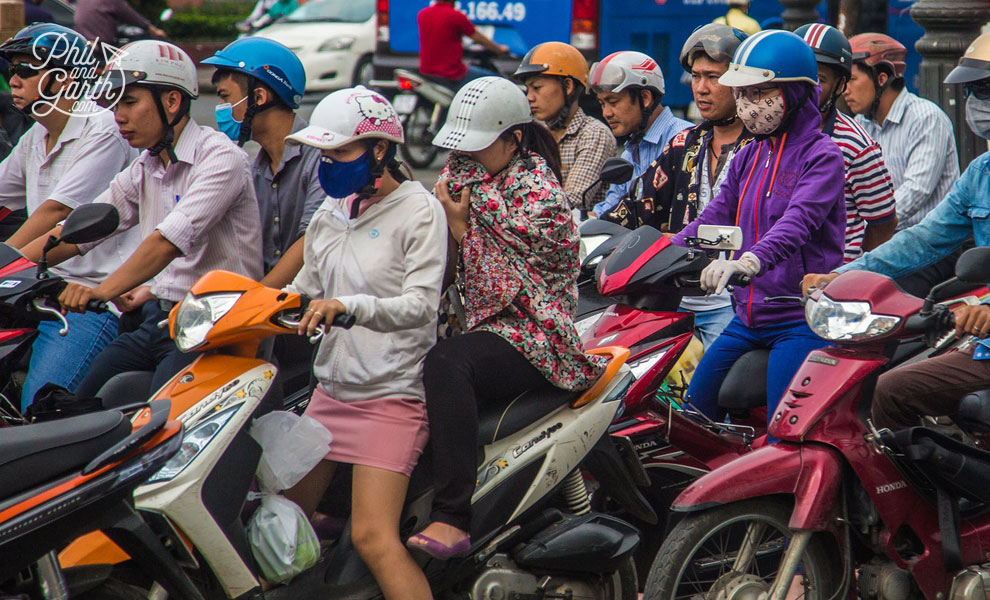 Aswell as face masks for protection against pollution, ladies wear long sleeves, gloves and blankets to cover every part of their skin. It’s because they want to keep their skin white and protect it from the harsh sun. 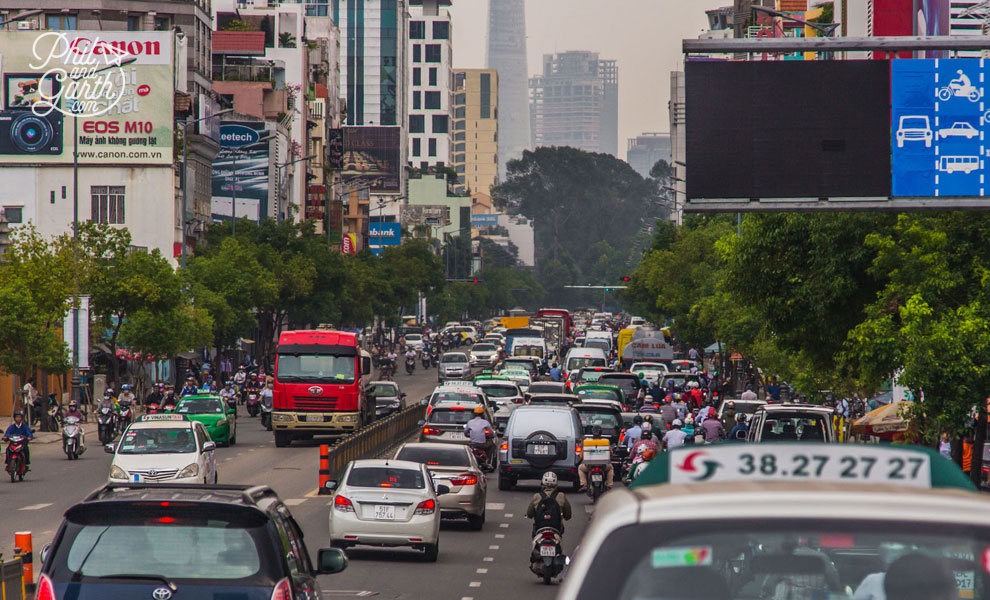 The air smelt of fumes and Phil said he could taste it, polluted yes, but not as bad as when we went to Beijing.  It was also very hot when we visited in November 36ºC with humidity at 80%, so it’s not pleasant wandering around as there’s no breeze.  Sometimes we felt like there was no air breath in at times, check out Phil’s backpack after a few minutes, there’s no doubt this is tropical heat! Heat and humidity in Saigon 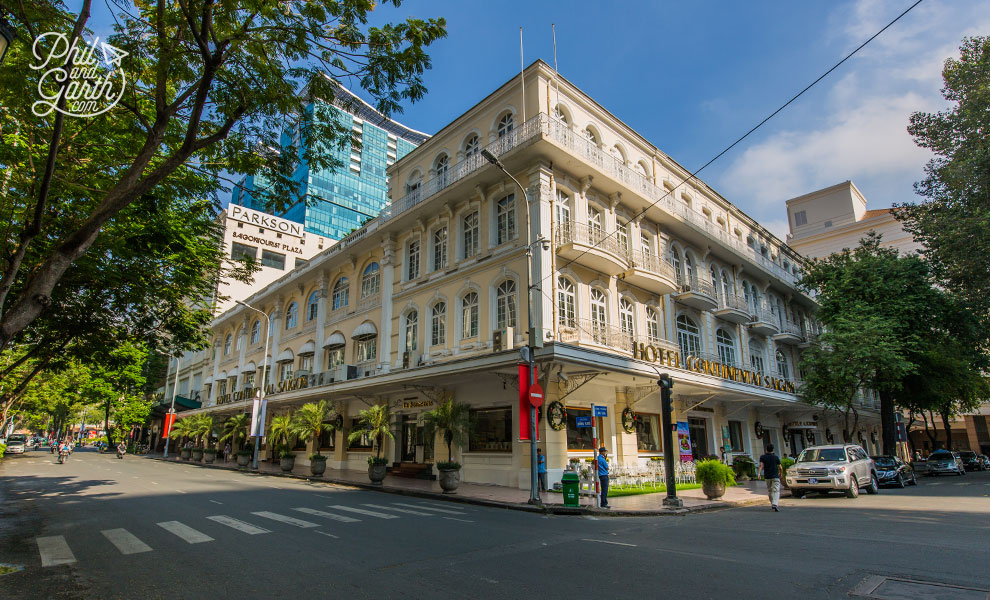 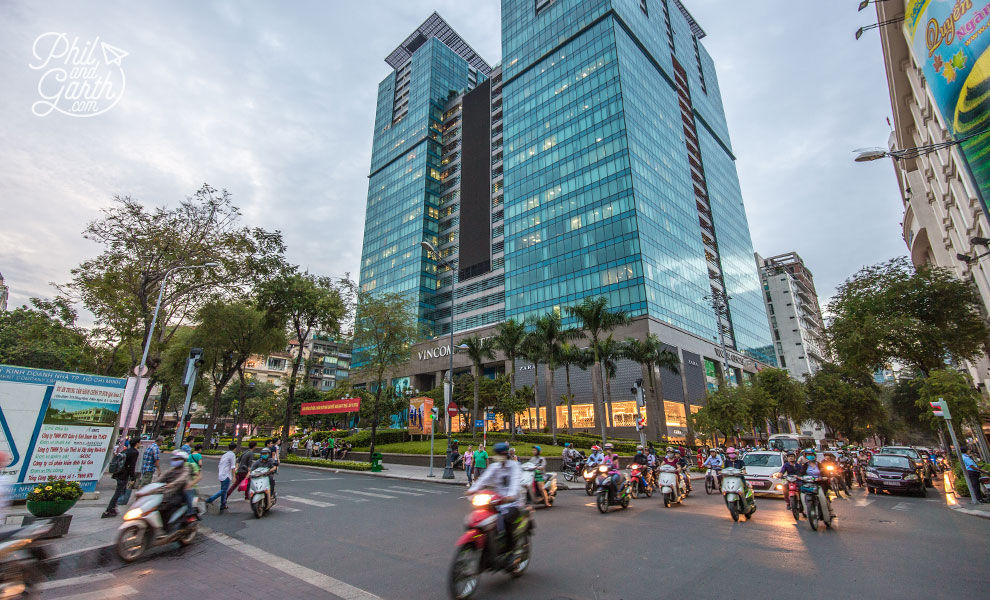 Saigon looks and feels very different to North Vietnam we felt like it was like being a European city but full of motorbikes. Saigon is modern where skyscrapers sit next to large shopping malls and impressive colonial buildings, a real mix of East and West.  It felt like we were in Paris at times, with the wide boulevards, boutique shops and immaculately pruned gardens.

This was the first Vietnamese city where we saw big name brands, the city oozes consumerism and coffee culture, caffeine addicts will seriously love Saigon! However you are constantly reminded that you’re in a communist country by the hammer and sickle Communist Party banners that hang from lamp posts or when you reach the huge communist style plazas. To be honest Saigon was reminiscent of any big Asian city, we definitely preferred the uniqueness of Hanoi. The heart of the city is District 1 Crossing the road is a nightmare!

There are 24 districts (neighbourhoods) we stayed in District 1’s bustling area, the hub for tourists with hotels and backpacker hostels. We paid for a couple of nights at Nhat Ha 3 Hotel, we’d recommend it as the location is good with all the main sights and some of the finest colonial architecture within easy walking distance.

But crossing the road in Saigon is still a nightmare! traffic is one big free for all, but unlike Hanoi where you just shut your eyes and hope for the best, you do the same but wave your hand slightly as you cross, well we noticed locals doing this, so we copied! 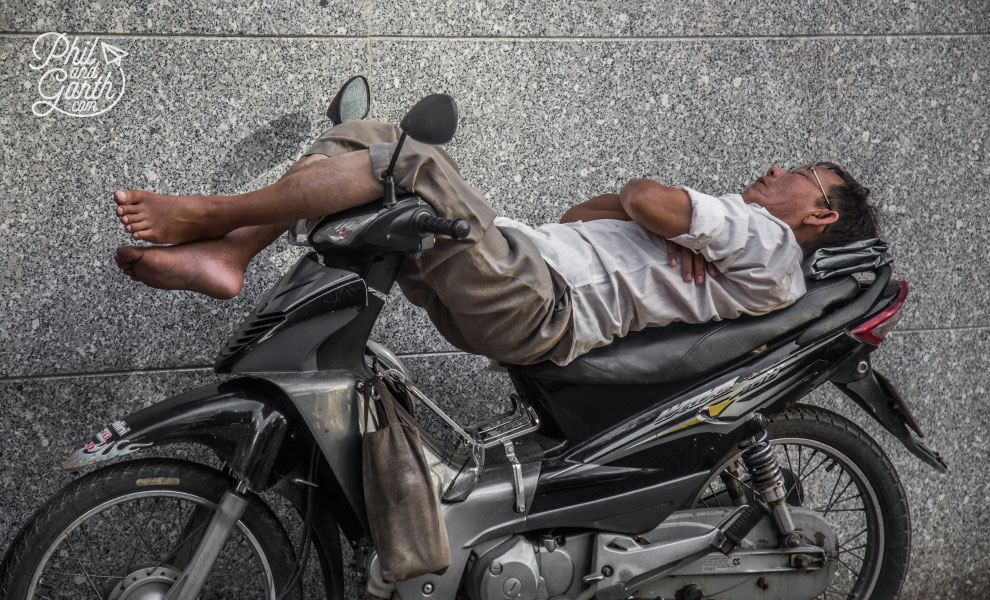 An unusual place to take a nap Selling tamarind on the street 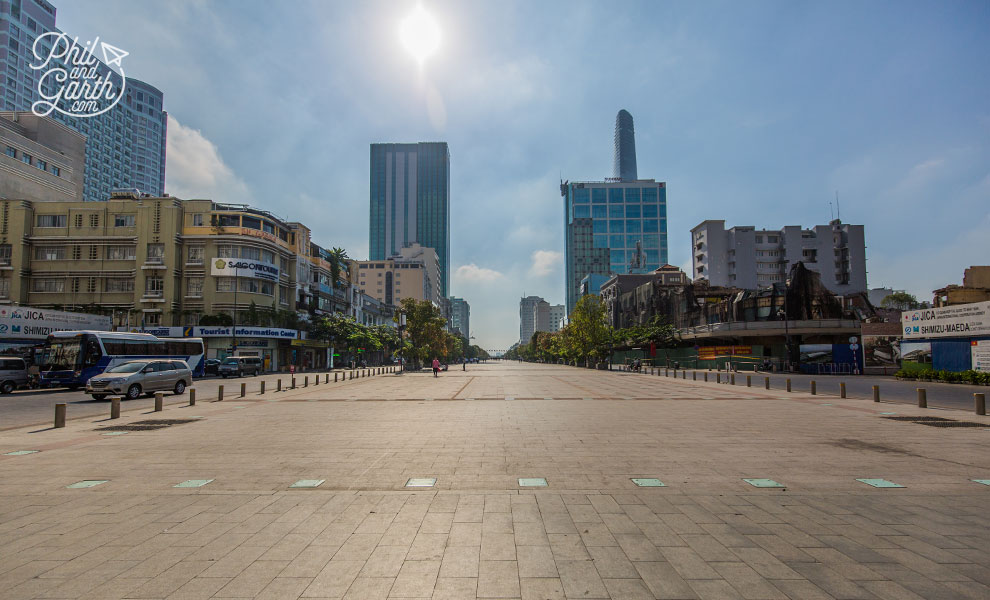 One of the huge communist style plazas 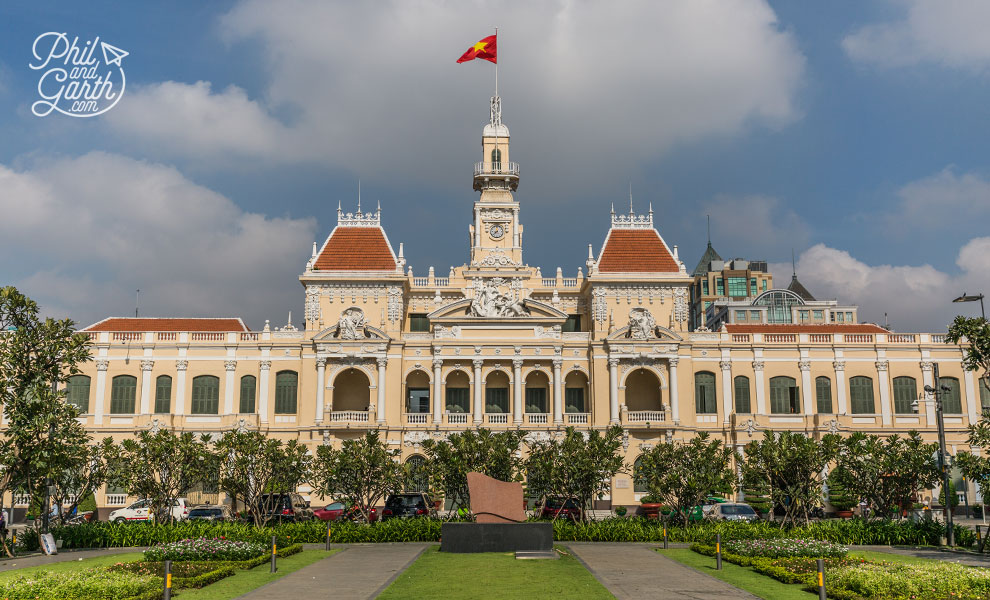 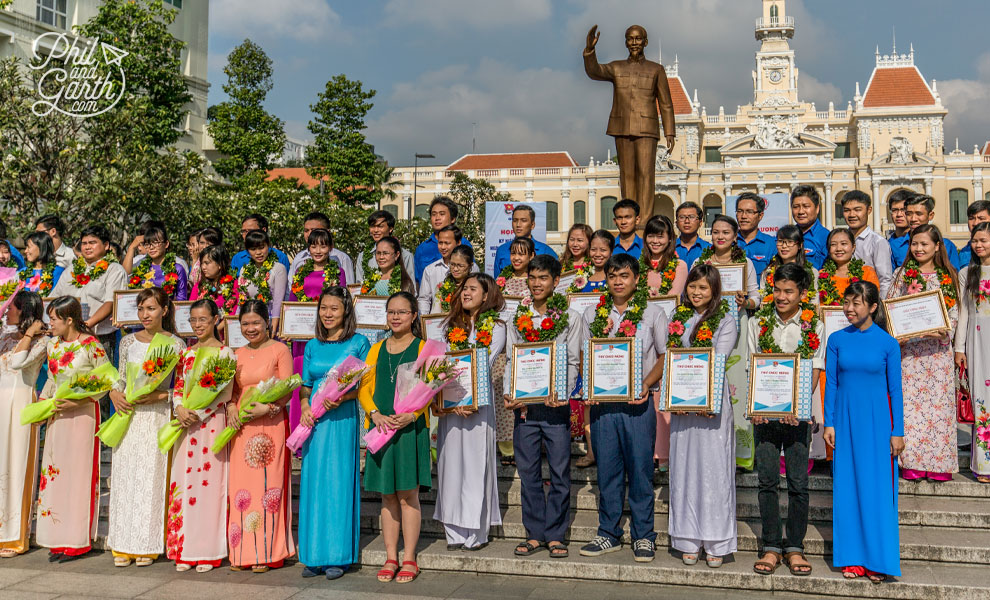 Graduation photos with Uncle Ho and City Hall as the backdrop

You can only view City Hall from the outside, but it’s one of the architectural highlights of the city. 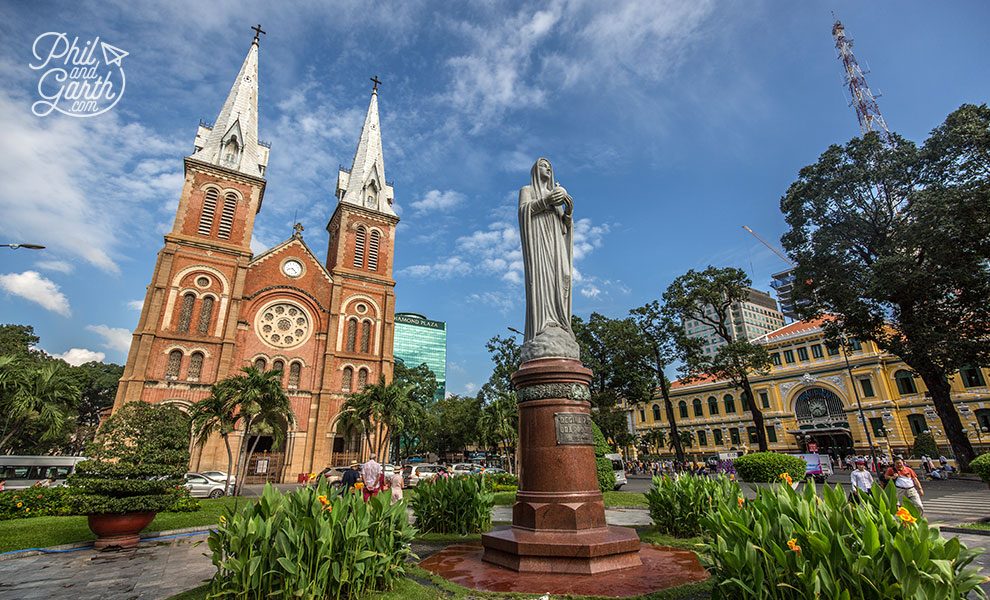 The landmark Notre Dame cathedral was completed in 1883, it’s one of the many churches in Saigon. The red brick exterior is the main attraction, the building materials were even brought over from Marseille. Inside is really simple, it’s stark almost communist looking.  The Virgin Mary statue stands in a small garden outside, she was said to have shed tears in 2005 and pilgrims now flock here hoping to witness the event again.

Just over the road from Notre Dame is the Central Post Office. It’s still a functioning post office, so why not pop in and send a postcard home? It has some fabulous and distinctive French architecture, designed by renowned engineer and architect Gustave Eiffel, it’s one of two buildings he designed in Vietnam.  Garth loved the painted maps on the walls from 1936 and the old fashioned telephone booths which looked like they belonged in a vintage railway station. 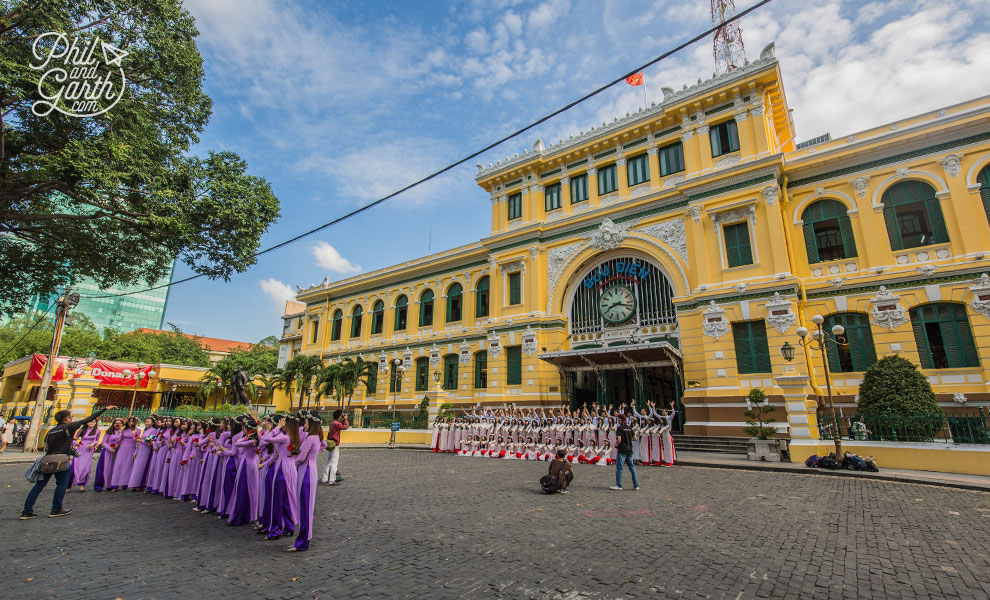 The telephone booths and maps inside the Central Post Office 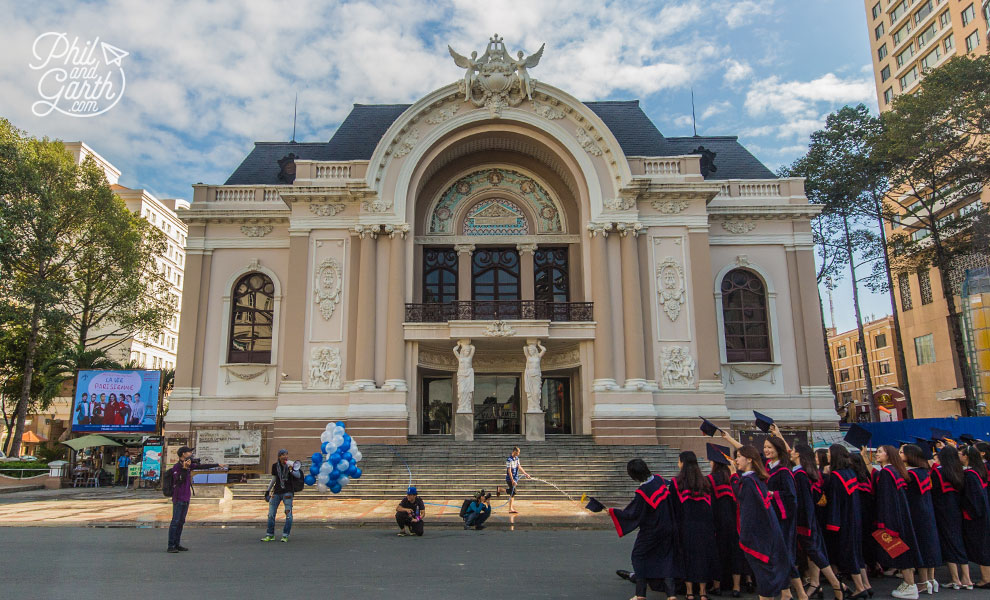 We took an early morning stroll and witnessed even more graduation photos, obviously a popular time of the day to do this before the sun gets too scorching. We noticed most of the students were girls and we were told that all boys must join the army, unless your family are wealthy enough to buy you out of it to go to college. Built in 1897 Saigon’s Opera House took its design inspiration from the Petit Palais in Paris. It was used by the government after 1956, but returned to its original use in 1975, today you can book an evening performance in the 800 seater auditorium.

Unlike Hanoi street food is not everywhere you turn, it’s seemed to be more dotted around in clusters, if you want street food try the streets around Ben Thanh Market at night. What we didn’t really know about Saigon was that it’s renowned for its world class food. Restaurants are everywhere with a huge variety of culinary delights on offer from Vietnamese to every world food you can imagine. L’using great for coffee and hanging out A look at the specials board

We ate at L’usine, a hip and contemporary cafe come concept store not far from the Opera House. We had Ban Mi, Croque-monsieur and got to try another French legacy – the coffee.  Even though everything looks immaculate, we didn’t risk the ice in drinks and took the cubes out. The Refinery located in the old opium factory

Our other recommendation would be The Refinery, a classic French style bistro, located in an old opium factory, also situated here in the courtyard were lots of other nice looking restaurants to choose from including Argentinian steakhouse, Spanish tapas and a Lebanese restaurant. It makes for a lovely evening, very atmospheric with the fairy lights hung between the trees, also a great place for people watching!

Whilst you’re in Saigon you must try a bit of the high life, there’s loads of fancy roof top bars all over the city to choose from. We headed to the Rex Hotel’s Rooftop Garden Bar to take in the views. We had their signature “five o’clock follies” cocktail. View of the City Hall and plaza

The Rex Hotel was a significant place during the Vietnam War, this is where the American Information Service were based, at 5pm the world’s press gathered to listen to the American army’s daily media briefings, the foreign press nicknamed it “Five o’clock follies”.  It was also a popular place for officers and journalists to socialise.

We only ordered a couple of Rex’s signature cocktail, the Five o’clock follie as they were quite pricey, we then stuck to the local Saigon Beer which tasted good.

Because our flight was delayed on arrival we missed the best part of a day in Saigon which was a real shame as we were going to visit the Cu Chi Tunnels. So bare this in mind if your in a tight itinerary like we were.  We’d already seen some of Vietnam’s war torn past in Hue and learnt a lot about the Vietnam War, but it would have been interesting to see the secret underground tunnels used by the Viet Cong, part of their tactics for guerrilla fighting, at least were saved all the gory details, plus Garth gets claustrophobia, so not sure if he would have coped?

We also took a day trip to the Mekong Delta so didn’t get time to visit The War Remnants Museum or The Reunification Palace.  Garth was also interested in seeing the The Dogma Collection Gallery, which holds the largest collection of original Vietnamese propaganda art. Phil and Garth with Uncle Ho in Saigon

Touristy and Non Touristy things to do in Hue, Vietnam

Hey!!
Great article. Vietnam is so contrasting. You can see on one side the shabby houses and the high-rises right opposite to it.

I felt the same about Hanoi and Ho Chi Minh City, but different isn’t always a bad thing. Crossing the road there is totally different to even the biggest roads in Hanoi. HCMC really is in a league of its own. The sights in Ho Chi Minh City are also quite different in style. Strangely the City Hall doesn’t look familiar which is weird because I walked all through that area. The views from the Bitexco Tower are also awesome. The food scene there is quite cool too, I particularly remember the Vietnamese/French bakeries, yum!

You have captured the essence and character of Ho-Chi-Minh city in flamboyant colours. The city seems to come to life in your post. Your tips are awesome to and helpful when planning a visit to this city.

Wow! Didn’t know Ho chi minh had such a contrast in terms of architecture. Beautiful! Do the bikers follow traffic rules? Or is it difficult to cross the road without the fear of being hit?