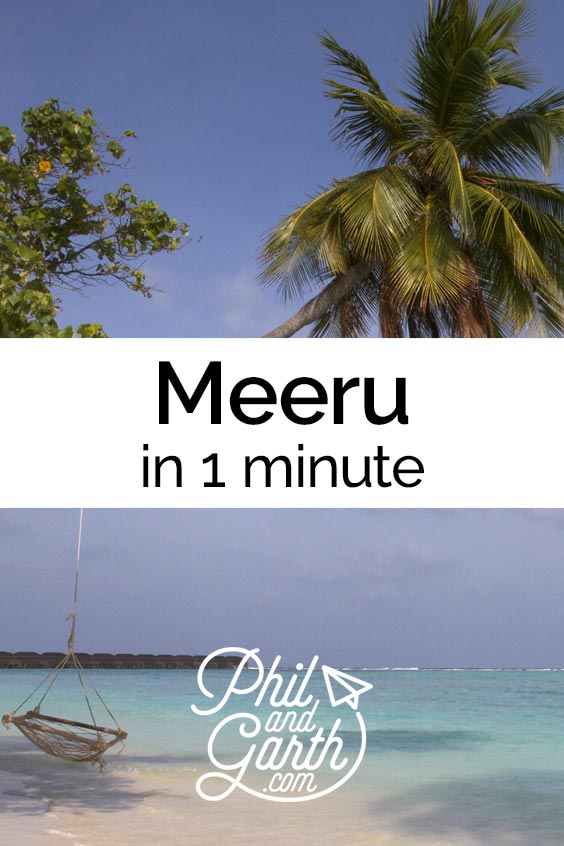 Think of the Maldives and you think of tropical paradise islands with perfect white coral sand beaches and luxury – well you’d be right, we went for a once in a lifetime trip, and it really was paradise found.  For this bucket list trip we decided to take a family holiday with Garth’s parents and have two weeks of sheer indulgence and relaxation.

Getting to Meeru via Speedboat

After an exciting flight on the comfortable and gigantic A380 via Dubai we arrived at Malé International Airport on the small island capital of Male, incredibly packed from coast to coast with buildings.

Our first glimpse of that turquoise sea at Malé International Airport

Coming out of the arrivals hall we were met with ridiculous turquoise coloured sea views against jetty’s and a slight wiff of petrol from the seaplanes. After a wait in the humid heat for other passengers to arrive we set off!

Our island – Meeru, or Meerufenfushi, in the North Male Atoll is 30 miles from the capital accessible by speed boat whereas other islands in the South Atol are accessible by sea plane. It took about 50 minutes, although it was bumpy, the anticipation outweighed that, wondering which island would be ours .. the feeling was like Christmas Day morning, passing different islands along the way. 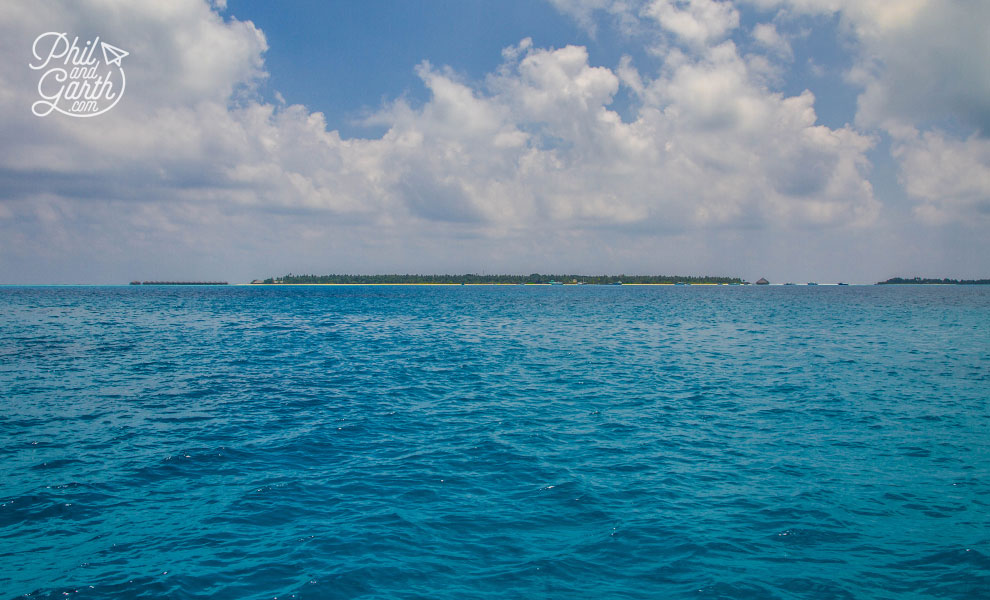 Our first glimpse of Meeru

Then we saw Meeru in the distance, just like a shipwrecked island of palms getting closer and closer, we arrived to its beautiful crystal clear turquoise lagoon and perfect white sandy beach, where we were met by a line up of staff offering us cocktails. We had definitely arrived!

Garth in the pool with his mum 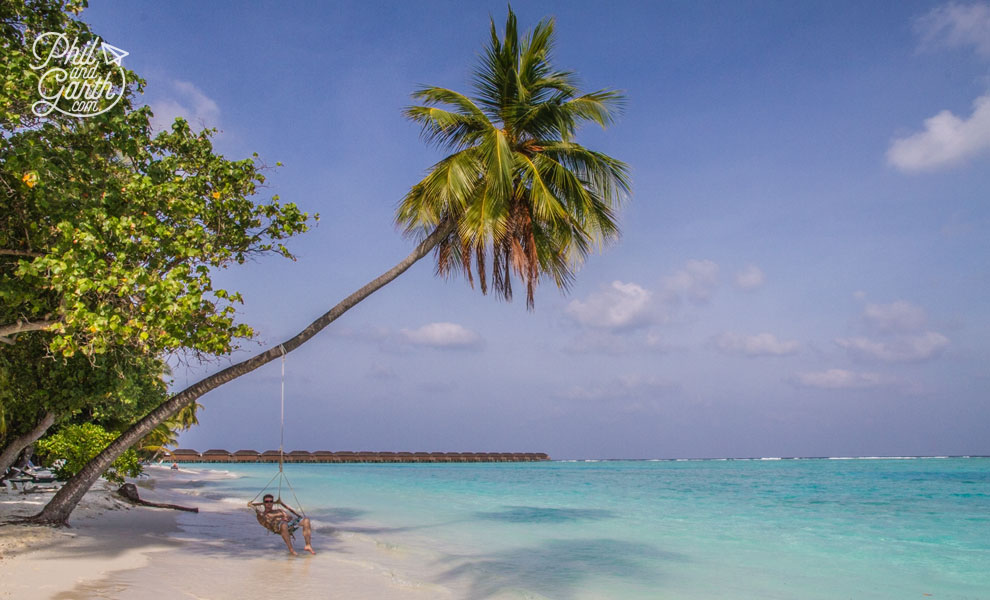 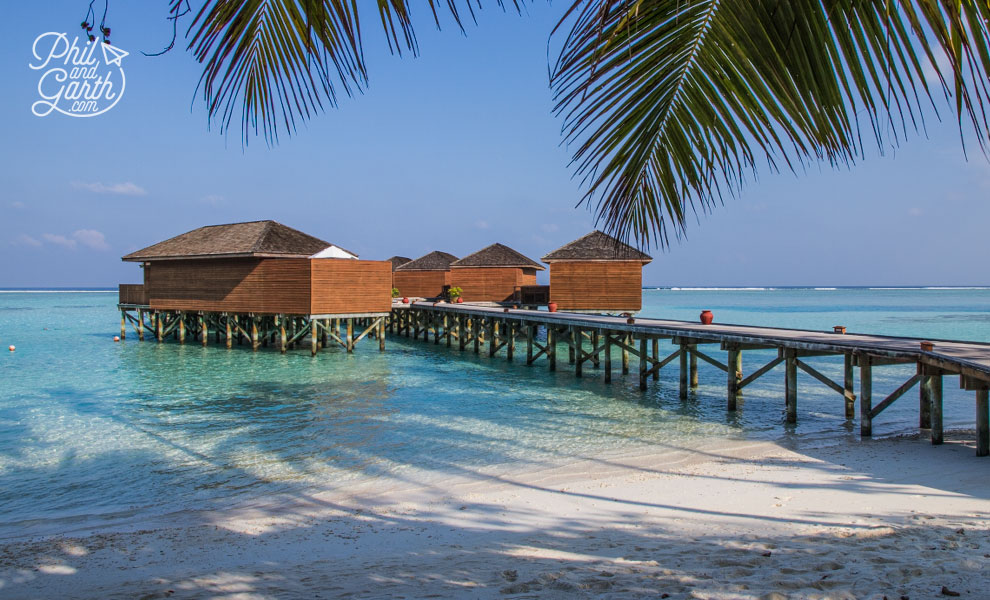 Garth taking in the view from our water villa

After a welcome drink and induction we were shown to our Jacuzzi Water Villa. Nothing can describe the sheer joy we felt as we walked across to jetty over the fish filled lagoon to our private villa, you really can’t believe you are actually in paradise. It was on our bucket list to stay in a water villa in the Maldives, so big tick! The island resort is actually once of the biggest in the Maldives, we went in high season, but you never felt like it was full as you only ever saw a handful of people on the beaches, just perfect.

Our favourite experience was probably snorkelling, just incredible. When we first put your heads under the water it was like looking in a giant aquarium, you can’t believe there is so much activity under the water, even standing in the shallow waters of the lagoon you are accompanied by baby sharks and stingrays, going further out to the coral reef the colours of the fish become something else. The island also provides some brilliant posters with guides to the varieties you can see, including a video screening one evening about the tropical waters and coral life for snorkelling and diving, as it’s an approved PADI site, which is well worth watching. There were plenty of other activities on the islands ranging from a driving range, water sports and tennis, but snorkelling kept us entertained the whole time.  Sadly the results captured by our GroPro camera underwater came out blurry.

Another favourite experience was just relaxing in the water villa’s jacuzzi at night and star gazing the dark night skies. The water villa had an open-air bathroom and the jacuzzi area was walled for privacy, so you are not overlooked by the other villas.

Our other favourite was simply walking around the whole island and stopping off at the couple of bars along the way, it took about 40 minutes to walk around the immaculate white coral sand shore. 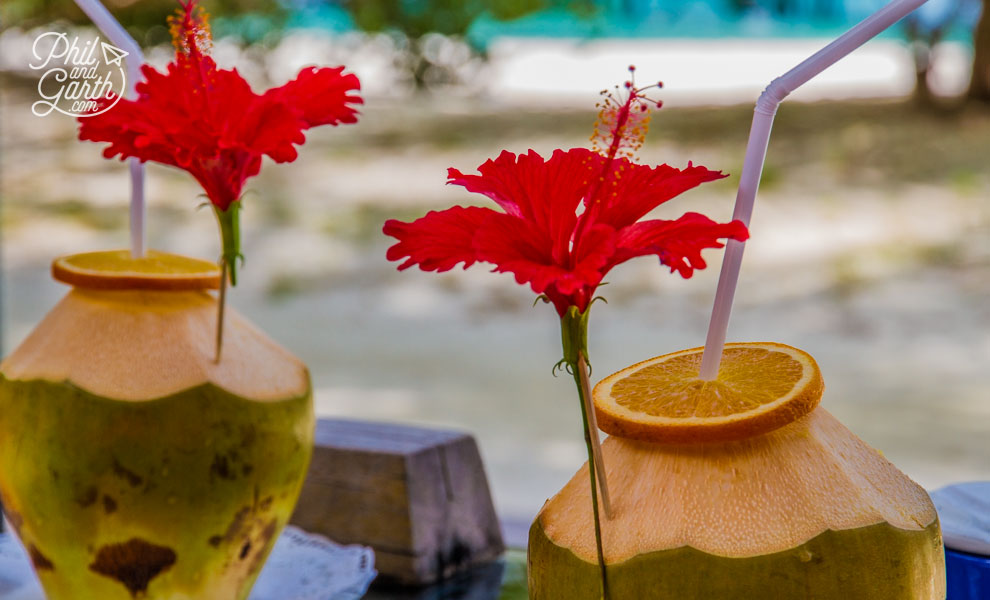 The staff were so gracious and nothing was too much trouble, impeccable service, many were from Sri Lanka and there was a whole staff community with island lodgings for staff including a football pitch and small mosque, they said that during their time working they too were well looked after. The beds were turned down each evening and decorated creatively with Frangipani or Hibiscus flowers.

Desserts are a work of art in themselves

Phil and Garth’s mum eyeing up the hot food counter

Food was incredible too, on arrival we were allocated the same table and waiter in the buffet restaurant and very varied on daily basis considering it was all-inclusive. We stayed for 2 weeks and never got bored. We also went to their À La Carte Asian Wok Restaurant and had some very tasty Japanese food, the prawns were enormous, bigger than your face! 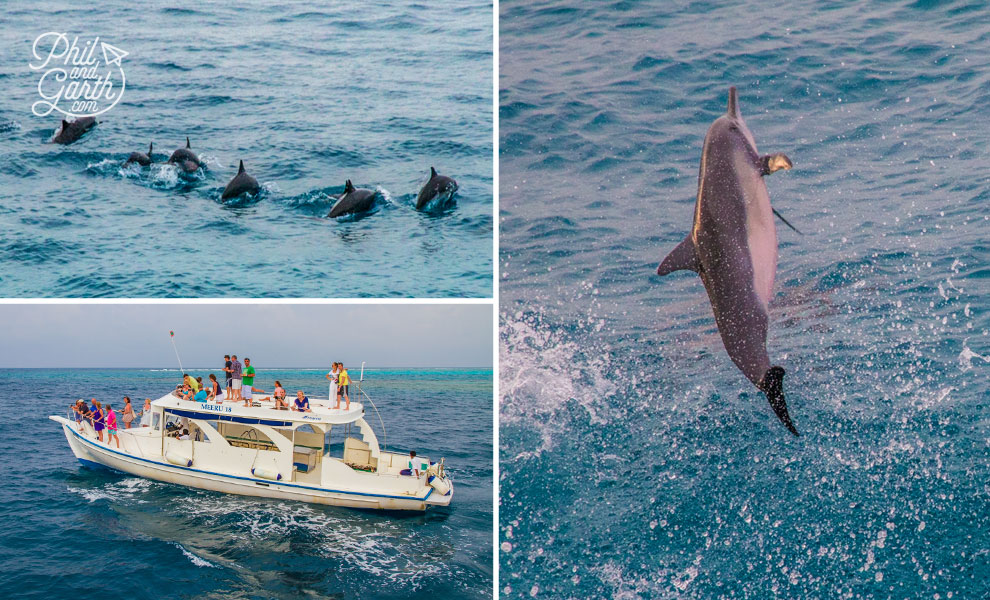 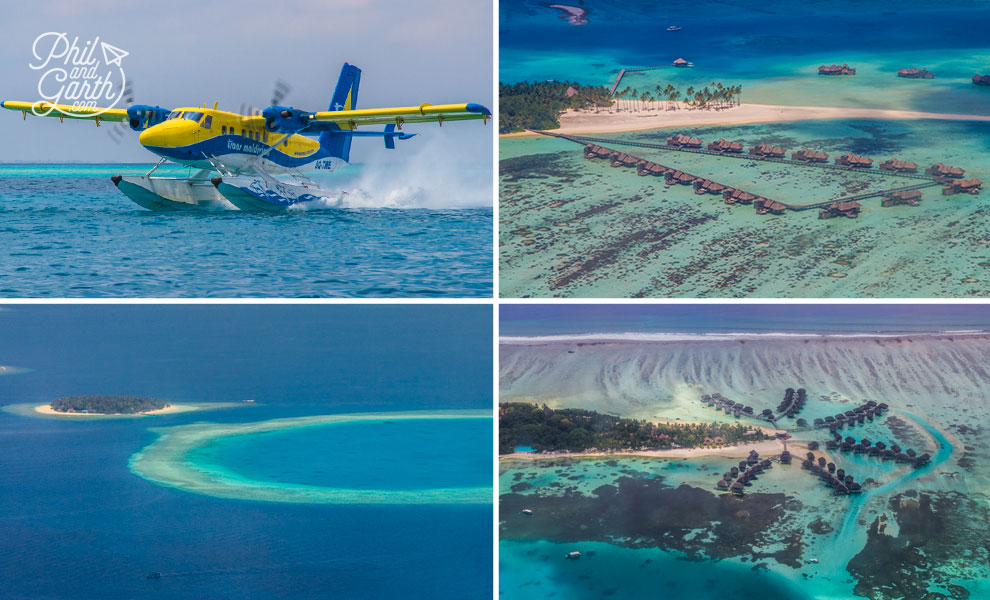 We went on a couple of excursions, including a free dolphin watching trip, which luckily they came out to play and entertain us. We also took a seaplane sightseeing trip which was breathtaking from the air, and would recommended, apart from some obnoxious couples who split up and hogged the window seats. Although expensive, the spectacular memory of seeing the Atolls was worth the price. 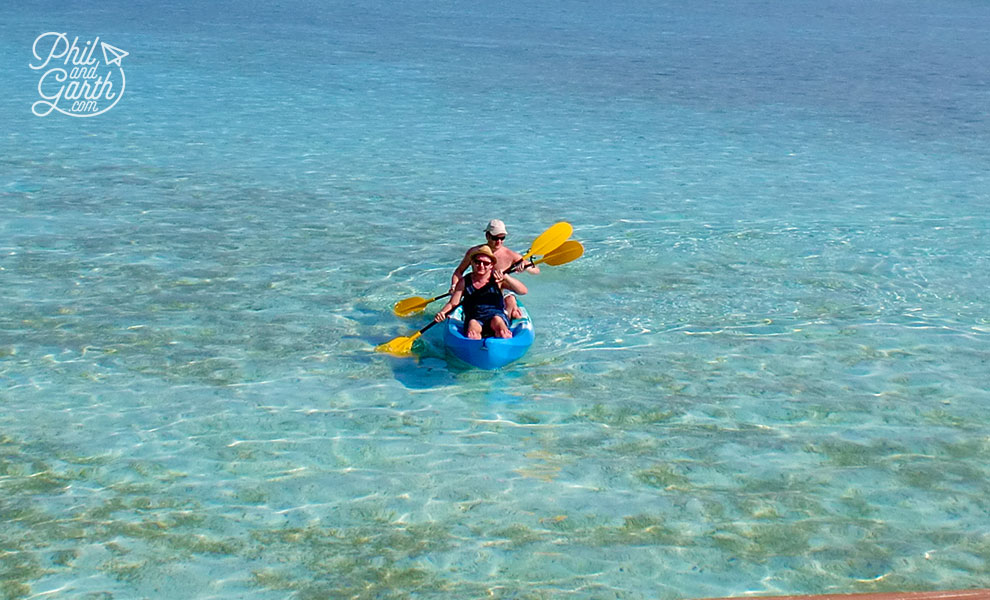 10/10 If we can ever afford to go ever again, we’d have no hesitation, hopefully before it disappears under the water as its currently only 1.5m above sea level, and its predicted that in 50 years it will be gone, which is sad.

Hi guys,
I finally made my decision and shortlisted hotels to two.
Adaaran select Hudhuranfushi and meeru. I’ll go with Meeru with my son and wife:) your review is so nice and guide us. Thank you:)
But if you give us a tip for which side of island we should choose for calm water and family activities.

The water is calm around the whole island, for activities you’re best on the side closest to where the arrival boat jetty is.

Wow guys, just WOW!! You consistently make me jealous with your spectacular posts!! I did not imagine the Maldives to have any densely populated cities, but everything else is just as fantastic as I’ve always imagined it! This is right up my alley!!

Thanks Jenn, yes Meeru would be right up your street! in fact any of the islands in the Maldives would be, they are all just so perfect

Wow, definitely two weeks in paradise. It looks stunning and those sunset views,,,I would have definitely gone for a few dives and explored the island (I am not sure I could do the relaxing thing). I probably will never afford to go to the Maldives but your photos definitely made me want to go one day!

You’d be in your element with diving in the Maldives Alexei! and yes whilst Meeru is not cheapest, there are some cheaper islands so they’re maybe worth exploring?

How absolutely gorgeous! I have not heard of this island, love to learn about new places. Looks like there is plenty to do and the accommodations and food look perfect. You two always find great adventures, I will pin this for future visit. Thanks again for sharing!!

Oh come on! This is insane. So you’ve definitely visited paradise, Meeru looks incredible. That sunset photo with the swing… Plus Garth looks pretty content sitting on that villa balcony. This is one of those places I would love to go to one day if I could afford it and as you say, time’s running it. I’ve got a serious case of travel envy, nice one!

David it was insanely beautiful, everyone should get the chance to visit the Maldives once in their lifetime, hope you do one day!

Wow, this is my kind of holiday. Such a beautiful 5 star resort especially with the waterfront Jacuzzi. Looks like the activities are a must a so much fun. Clear water, snorkeling looks amazing along with dolphin watching, seaplane ride and more. Sign me up I am so ready to go. Love the video and pictures as always! Just amazing! Thanks for sharing and making me jealous 🙂

Pretty sure my head just exploded with how absolutely PERFECT Meeru looks. The pictures you shared look like something out of a dream. The food, the pools with a view, the bathtub under the stars! I’d never heard of Meeru before reading your blog post, but now, it’s definitely on our list as soon as we can afford it (and soon; it’s terribly sad to think this beautiful place will soon be gone from the world).

If I never get to go, I’m glad I got to read about it! Thanks for sharing, guys!

I have never read a story before where someone describes what it is like to get off the flight and travel to their island so I was with you all the way! But Garth, another infinity pool?? Are you trying to make me even more jealous than I already am? Oh yes, wait, you are, you post a picture of Phil in that amazing hammock then you looking at the sea view from your villa! Fabulous post, stunning photos and I secretly loved to hate reading this 🙂 Thanks for making my day and giving me serious wanderlust!

OMG! That is all I have to say!…. Over the water villa! Did spoil yourselves didn’t you! The Maldives are on our bucket list and one day we will get there but not in the next year or two and NOT in a fancy over-the-water-villa! Do I sound jealous by chance? We will sail there one day. Your photos are once again fabulous and the buffet looks gastronomical (see what I did there!) Great post and tips.

Thanks Kelly! Hope you get to sail there one day!