Historic Havana – All You Need To Know

Havana – Step back in time

Havana was originally founded by the Spanish back in 1515, and has been under communist rule since the Cuban Revolution in the 1950s, but things are changing fast. A city break to Havana in the largest Caribbean island of Cuba makes for a unique and memorable visit. Havana appears romantically frozen in time, conjuring up a bygone era with its colourful vintage American and Russian cars driving around its charming crumbly old buildings. The city is an architectural mix of Colonial, Neo-Classical, Art Deco and more. There are no visible brands, advertising and billboards are banned. Instead beautiful typography from old ghost signs simply left on shop stores and old movie theatres from the 1950s since the Revolution.   The smell of cigar smoke lingers in the air too, which surprisingly we didn’t mind, it just added to Havanas ambience. After a quick look online we paid for Hotel Inglaterra because it’s the oldest hotel in Old Havana dating back to 1875 and not much has changed. Originally built by the Spanish it reminded us of the Alhambra Palace in Granada with all the Moorish tiles everywhere. Our old school bedroom was of reasonable size, great high ceilings but getting cases in was a bit of a challenge due to the layout of the beds. The bathroom was huge with a great big walk in rainfall shower with lashings of hot water. We had a fridge that contained premade cocktails that seemed very reasonably priced although we didn’t try them so can’t vouch for their quality!

There are beautiful large old squares with impressive sights like the Cathedral of Havana San Cristobal and Castillo de la Real Fuerza, the castle’s watchtower has a weathervane which is the emblem for the city, and also features in the logo for Havana Club Rum. But easily our favourite area of Old Havana were the countless narrow streets off these squares which are well worth exploring to immerse yourself in local life. 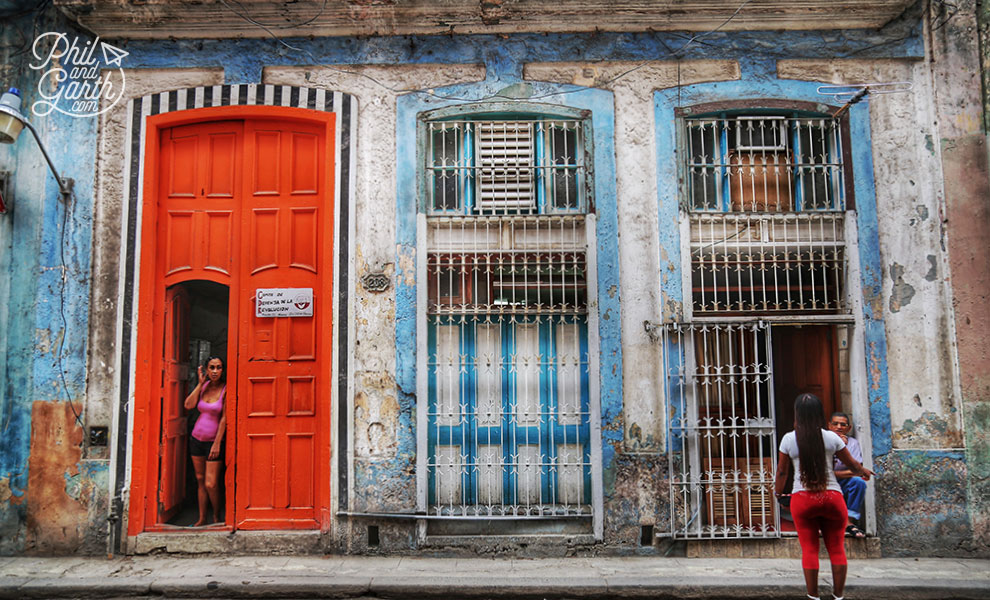 A lady stands in an impressive doorway in Old Havana 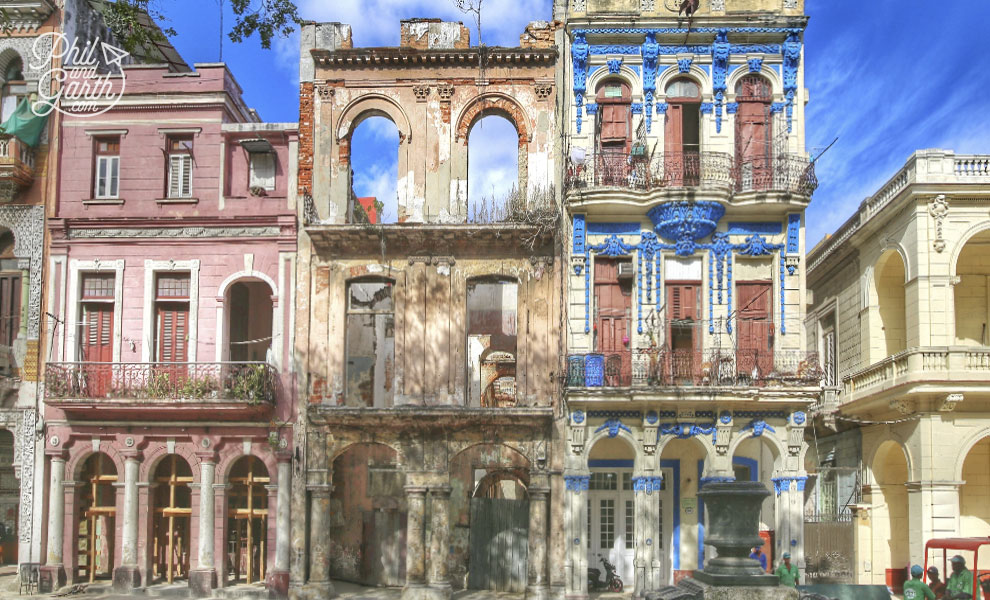 Old Havana houses – some in desperate need of repair

People are poor here and living in unbelievable conditions. They live in old mansions houses that were obviously once magnificent in the 1950s but have since fallen into disrepair and decay, they are split up into ten living accommodations or more. Three generations of family still live in the same property but you can tell they are immensely proud as the locals sweep and mopp their front steps and pavement. Many of the houses have no roofs or upper floors, some even have trees and vines growing right out of them or very dangerous, on the verge of collapse and simply propped up with wooden planks.  Phil said in the UK you wouldn’t be allowed to go anywhere close to these sorts of buildings for the fear of them falling down.  The faded, Caribbean pastel colours on crumbling plaster make for wonderful textures, a treat for photographers and graphic designers! Lets just hope Havana someday will be able to restore these historic buildings and not demolish as tourism develops.

On Cuba Street in Old Havana we visited a ration store, absolutely incredible to see Habanaeros arriving with their ration books and the store shelves stacked with minimal items on offer. Rationed items included rice, sugar, eggs and butter. Habaneros we spoke are keen for the government to keep rations as everything is so heavily subsidised. Most people live on a basic diet of rice and black peas and chicken. As the Havana’s class system developed so did building work and Centro Havana was born.  Walking from our hotel to Central you pass through shopping areas and people selling internet cards.  Garth’s favourite was looking up and seeing all the American signage from the 50s intact and untouched, really inspiring for a graphic designer, he took tons of photos!  We passed a few derelict and working cinemas perfectly intact, some great examples of 1950s architecture, art deco and design. American shop and cinema signage from the 1950s Further into Central Havana, we liked walking from the cosmopolitan street of Avenida 23  (which reminded us of 1950s Los Angeles) to the impressive Hotel Nacional de Cuba where all the famous people and diplomats stay. It’s one of those really grand hotels of the world, so enjoy the atmosphere and have a mojito in their Garden Terrace Bar and check out all the photos of the stars who have stayed there.  After you’re done in bar, head outside and take a great selfie under their huge flag with the sea wall and skyline behind. One the most iconic of Havana places is Revolution Square as we’re so used to seeing on tv news reports. Dominating the square is the huge memorial of Che Guevara on the Ministry of Internal Affairs building. The square is surrounded by other Utilitarian style government buildings, with another memorial of Camilo Cienfuegos adorning the Ministry of Science and Technology.  Opposite these is a huge statue and monument lookout tower dedicated to Jose Marti, a Cuban national hero. For such important square, we thought there would be pomp and ceremony guards, but instead just regular security guards. Cuban food is simple and no frills but it’s still tasty and not as bland as we had read on Trip Advisor reviews. Chicken is chicken no delusions of grandure, beef limited due to government cattle restrictions, and seafood actually not that popular despite Cuba being an island. There are two types of restaurants – private and government owned. State run restaurants are on the ground floors, and have a good set menu of the day for 10 CUC – an alcoholic drink, main meal of chicken or pork and some weird creme caramel and coffee. Paladares are privately run restaurants and usually upstairs, so you can’t see inside, but have people outside trying to tempt you in.  We went to Paladar Los Mercaderes after a recommendation from a friend. Food was great, and not expensive by UK prices. We’d also recommend taking trips out into the suburbs and go to restaurants run in family homes. We went to Dona Carmello, whose back garden had been converted into a dining area, complete with a bandstand for live music. Another home we went to had their living room converted to a dining room (with fish pond!), and you literally just go to their family bathroom if you need it.  We also did a ground floor government restaurant which was great but anything is great after three moheeetoos(sp!) Talking of which, the national drink is rum. The Havana Club Rum brand is recognised worldwide and made from the islands plentiful supply of sugar cane. Mojitos here are not as sweet as in the UK, but still refreshing. Ernest Hemingway, the American writer who lived on the nearby island of Key West, USA would regularly visit, as he was great friends with Fidel Castro and his favourite Havana bars are still there to be enjoyed. Three of the best places to go enjoy the two drinks are La Floridita for daiquiris, La Bodeguita del Medio on Empedrado Street for mojitos and Hotel Ambos Mundos for either drinks, all three bars are in easy walking distance of each other too, our favourite was Hotel Ambos Mundos where we enjoyed great live music, food and people watching. You can’t escape live music, all the bars and restaurants we went to had live bands which was great! But have a bit of change ready as at some point they will come round trying sell their CDs and asking for tips for the music. We gave most musicians 1 CUC and they seemed very happy. Those that offer requests, ask for the Cuban classic ‘Guantanamera’ which means a girl from Guantánamo. As soon as we arrived in Havana and opened our taxi door we were hassled by a guy trying to take us to his restaurant he wouldn’t take no for an answer, these guys are known as jinoteros.   Just like any other big city be aware and alert for scams.  It was annoying continuously getting hassled for taxis, restaurants or even cigars, but it won’t spoil your trip once you get used to it,  in the words of Zammo, “Just Say No!”. Cubans earn on average £15 a month, so it’s understandable they want to make money from tourists, our advice would be to tip generously instead. We tipped everywhere including room maids 1 CUC for each night we stayed and 10% for restaurant bills. Also worth noting there are two currencies in Cuba, you need to change your money on arrival to the CUC Pesos for tourists, as Cuba does not trade financially on the international market. El Capitolio building will be on your sightseeing list.

An open top vintage car seemed the best and most authentic way to see Havana rather than the open top bus tour. There’s no shortage of drivers and cars outside the Grand Theatre (Gran Teatro de La Habana) just choose a colour of car and negotiate a price. We hired a private guide with Yosel from I Love Cuba and booked online before we went. There’s also rickshaws which lots of people were taking. But you can easily walk Old Havana by foot. In Old Havana on Plaza Vieja Square is the Camera Obscura building. Head up 4 floors to the 5 minute camera obscure tour, which is interesting, then you have access to the roof for great aerial views of old Havana. You really get a sense of how desperate in need of repair all the old buildings are. View from the roof of the Camera Obscura building View from La Torre on the 33rd floor

Another spot is from the bar and restaurant of La Torre on the 33rd floor of the FOCSA Building in Central Havana it has amazing ocean views.  Head up in the lift and buy a couple of beers, and admire the 360 degree view. Best of all look down on vultures swooping beneath you!  It’s the tallest building in Havana.

Cuba history in the making With history in the making and the USA trade embargo lifted, now is the perfect time to go. It’s a completely authentic experience in this UNESCO World Heritage Site. You must go before the country changes beyond recognition with tourism. Enjoyed this post, really informative. We are looking to visit in November, planning a 2 night stay then a cruise then 5 nights on the beach. Looks like a photographers paradise! Thanks for sharing!