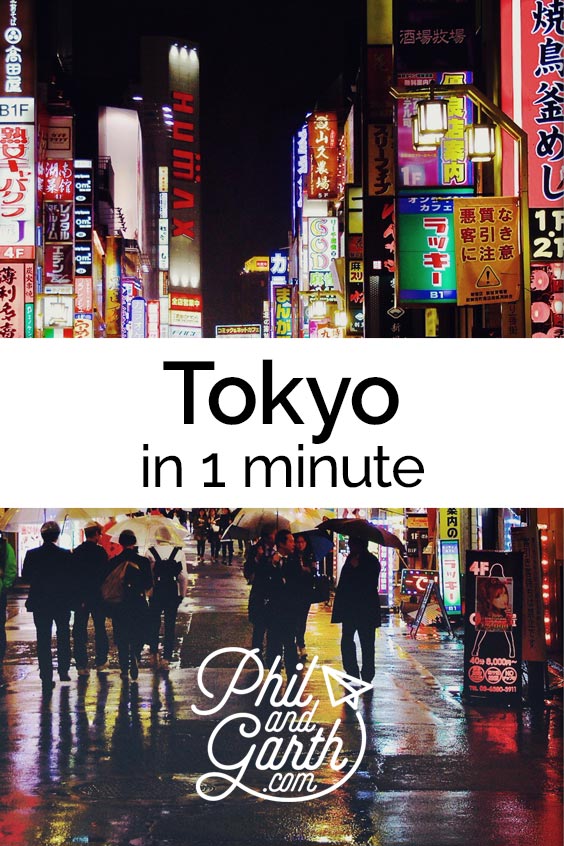 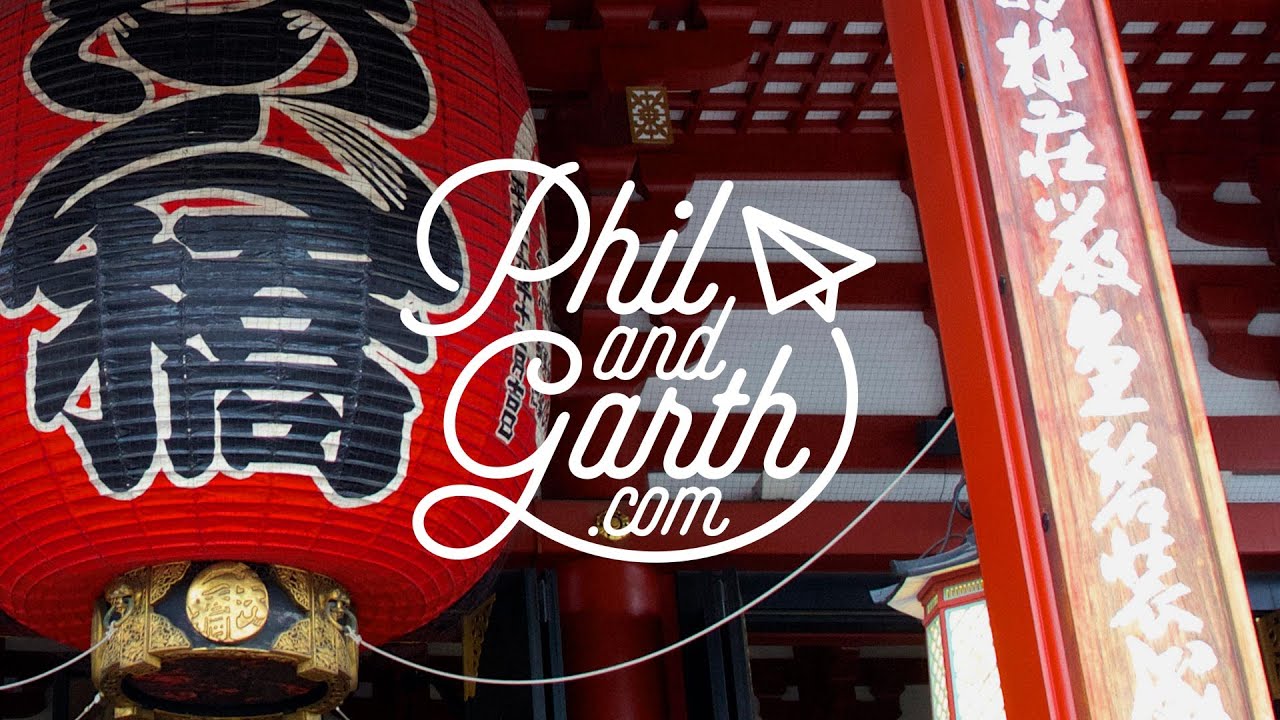 Tokyo was Garth’s ultimate bucket list destination as he studied Japanese typography at art school back in the day and has been fascinated with Japanese popular culture ever since. When we first arrived into Tokyo high up, via their elevated motorways you realise it’s just like another major city – a massive ugly concrete jungle sprawl. However things change when you start visiting Tokyo’s distinct neighbourhoods.

We arrived at our hotel, Toyoko Inn in Asakusa during the evening, accommodation in Tokyo is generally expensive and small, so we knew what to expect. We entered our room like two very excited school kids channel flicking through Japan’s wacky TV channels, which they really are!  Then it was time to experience that one things that sets Japan out from the rest of the world – the high-tec toilets!  There was a pause…then a scream.  Yes Garth had found the button!  Followed by “its not as bad as you think!”. 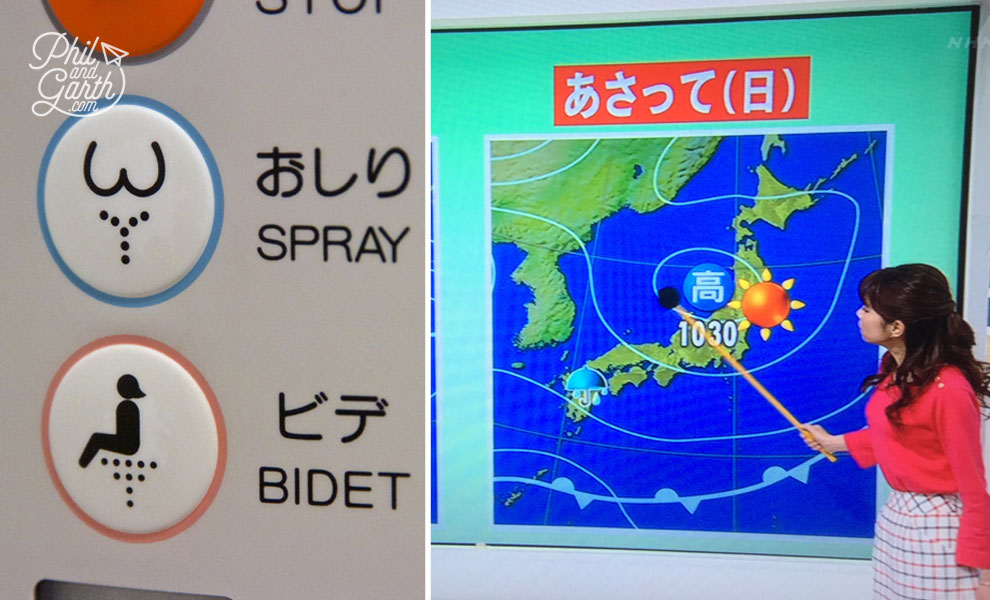 We decided to venture out on our first night and stumbled upon Komagata Dojo, a quaint looking restaurant near our hotel. We ventured through the hanging curtain drapes outside (which means it’s open) All the guests were dining at traditional low tables sitting on the floor.  No one spoke English, so we wondered if we were a bit out of our depth, but it looked incredibly authentic, so when in Rome and all that, we took off our shoes and decided to be adventurous as we were gestured to a table. The menu was all in Japanese, we really didn’t know what to order, but the friendly staff got the chef from the back who spoke some pigeon English like “egg, beer and fish”, trying to get comfortable sat crossed legged we placed an order for egg, beer and fish! 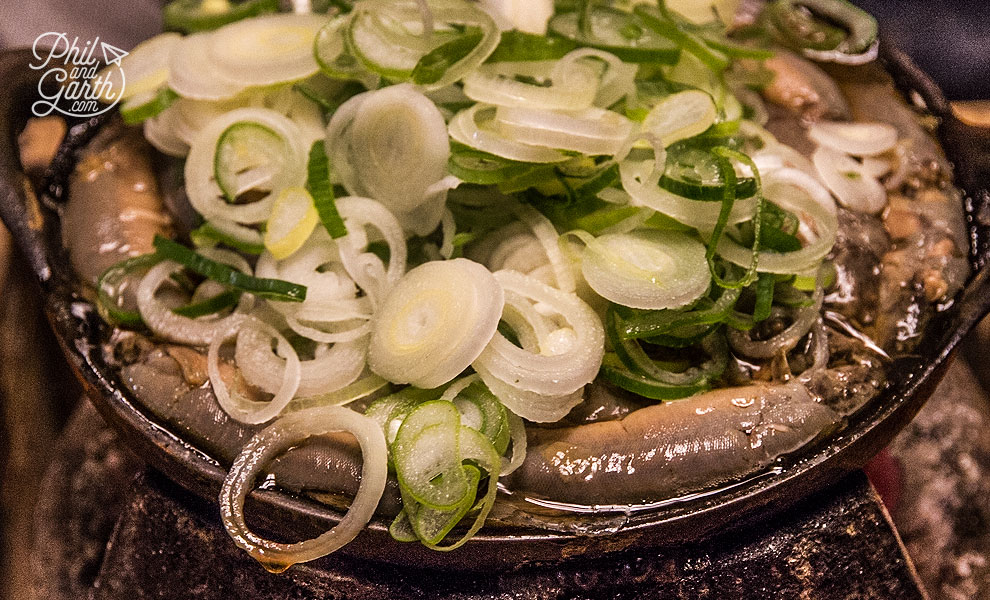 A fantastic plate arrived with lots of chopped chives and onions, miso soup, tofu, a tea pot of liquid and lots of little eel like fish, together with a cooking pot. The waitress gestured to us what to do, we’ve no idea what she was trying to get us to do but eventually we pored the contents of the tea pot onto the fish, and pilled the chives on top. What fun, not knowing what we were doing or eating, but a great atmosphere. We struggled to eat it all, it was an acquired taste, but we didn’t want to be rude and not finish them, so we struggled through them.  Success, we’d finished them.  Then the waitress brought along the same thing again – another massive plate of baby eels! It was only afterwards we discovered, that if you eat everything they think you haven’t had enough which is why the brought us more! Komagata Dojo is one of the oldest restaurants in Tokyo and only serves its speciality Dojo fish, what an experience to remember though.

The following day we were apprehensive about getting around because of the language barrier the evening before, recalling scenes from Lost In Translation, but getting around was very easy, as all the signs are also in English. You soon realise there are two types of trains – the JR and Subway, you just have to decide where the station for each type of train is and which is the best type of train to get you closet to where you want to go. 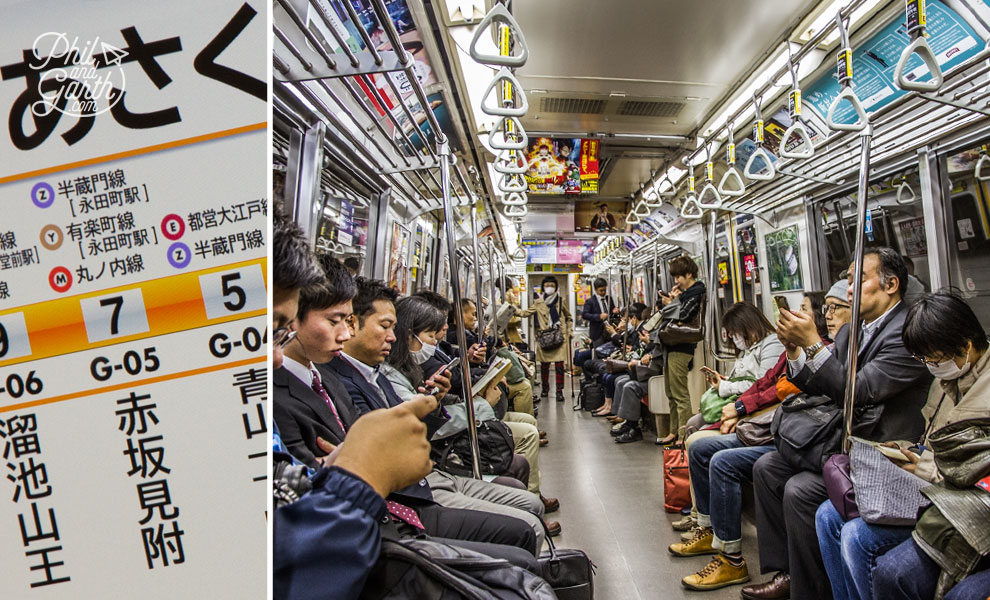 We started the day with the world’s largest fish market, Tsukiji, (NB: It was closed in 2018 – now relocated to Toyosu, but the outer markets are still open). We wandered around, dodging scooters and carts, being careful not to intefer with buyers and sellers going about their daily business. Absolutely fascinating watching them, and seeing vast quantities of fresh fish being dispatched in all manners. Outside there’s a nearby market in narrow streets selling all kinds of fish related items, like knifes and bowls, great browsing. 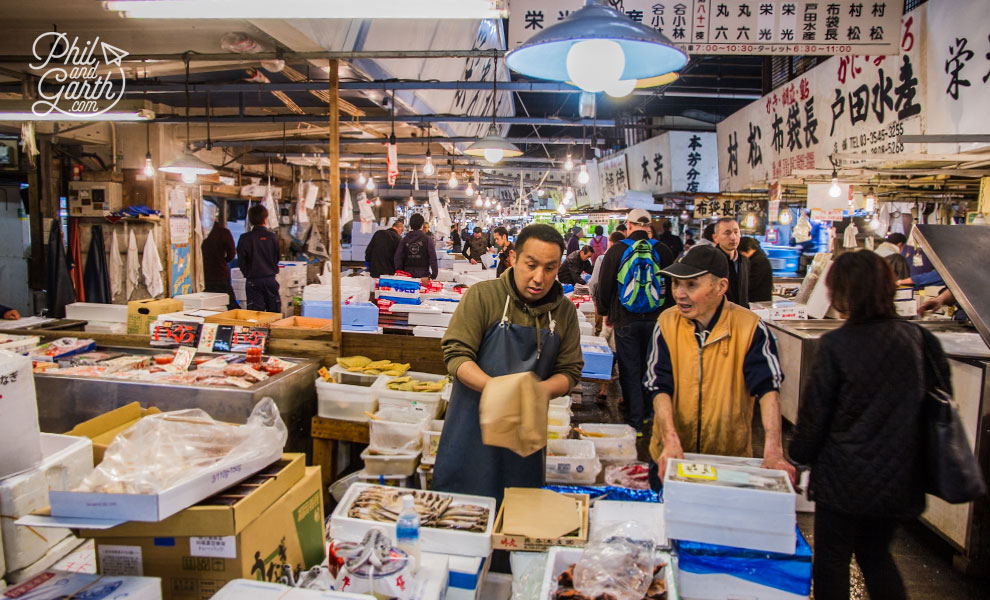 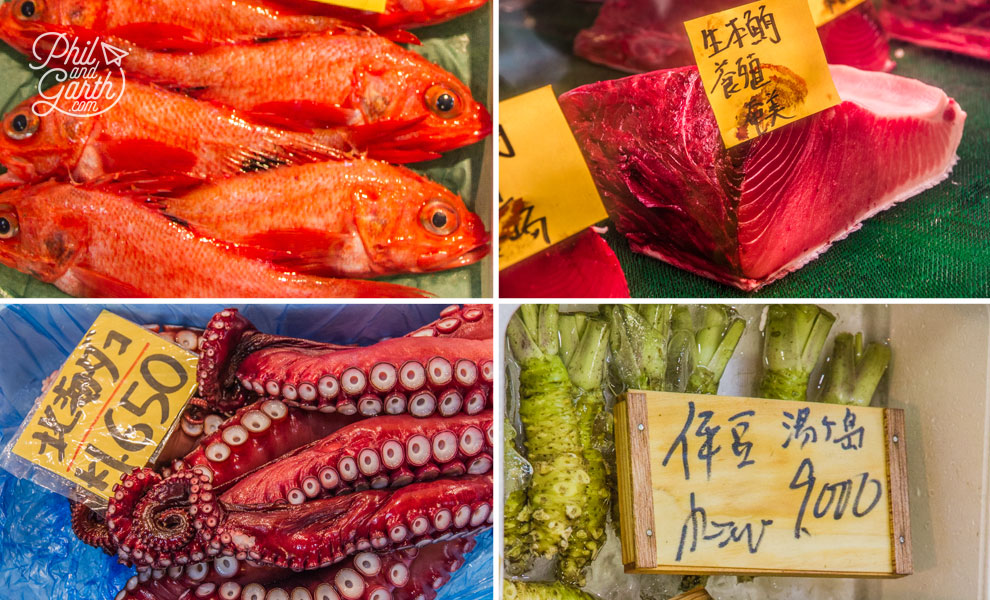 Walking on from here, you’ll come across lots of small sushi bars, we tried fresh Sushi and Sashimi and just like Yo Sushi back at home, the plates whizz by on a conveyor belt, we ordered dishes from the menu, and tried speaking Japanese words like ‘thank you and please’ which the chefs in front of us seemed genuinely pleased we had tried, they even tried to say to say good bye to us in English as we left. There are many sushi bars in this area, because it’s all so fresh from the market. 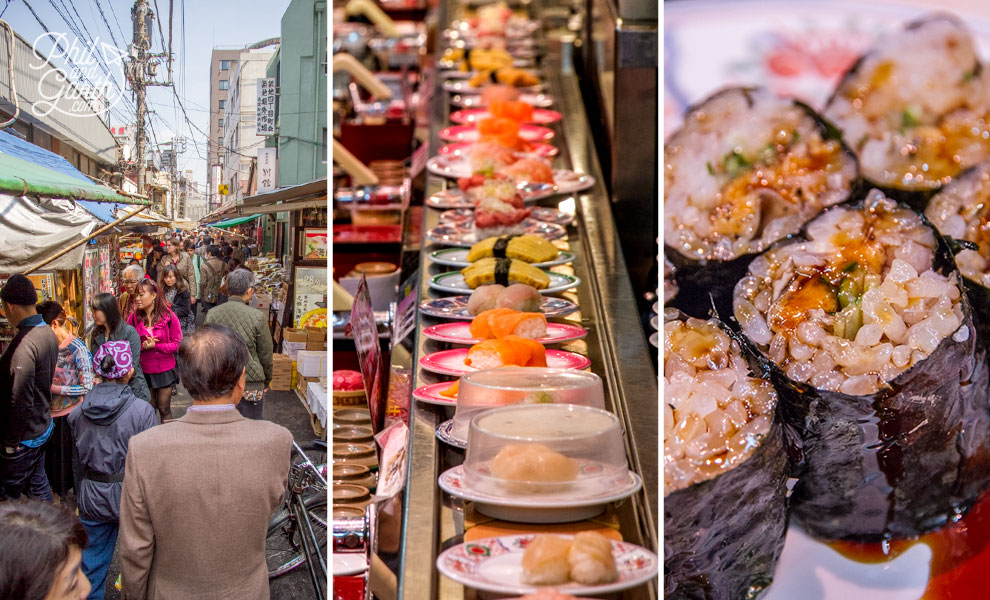 Next up was Akihabara, an incredible electronics district.  We  both absolutely loved it here, it’s a real visual feast of colour! Phil loved it here because you can buy anything electronic that you can think of. We both loved all little stores which are like real versions of eBay shops. Every inch of space is packed with goods from lasers to photography lights and computer parts. The LED lighting stalls are especially good! We managed to pick up a USB lead to download the pictures from our DSLR for the equivalent of 80p. 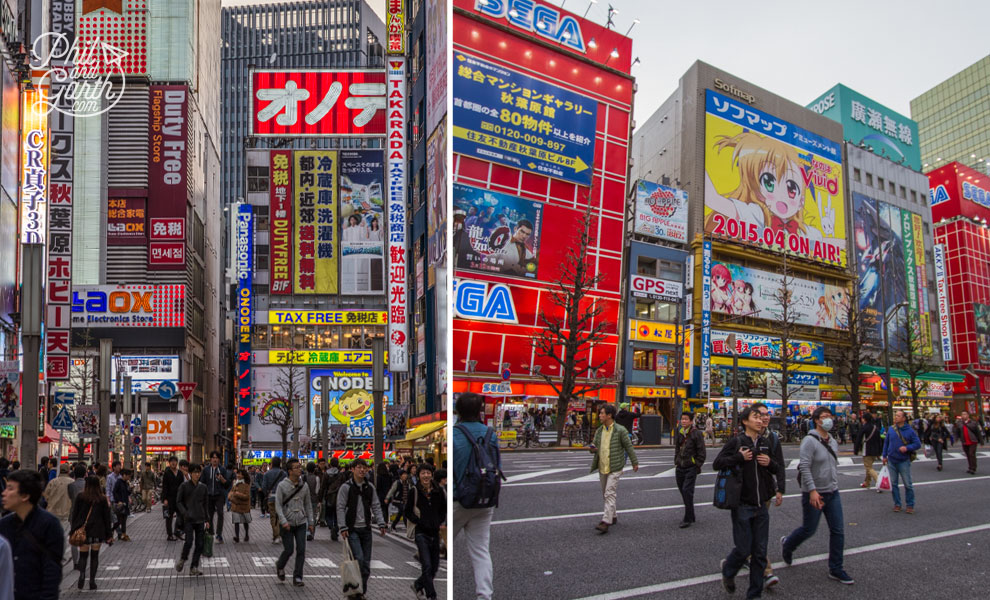 Akihabara for Manga and Anime Cute Mascots and characters are all over Tokyo

This electronics town is a clash of colour, typography and light! just brilliant!  It’s feels strangely familiar, yet very alien as you can’t understand any of the signage, it’s graphic design heaven for Garth.  If you’re into Manga or Anime then diehard fans will love it with dedicated and  specialised shops, we loved wandering them trying to make sense of it all! 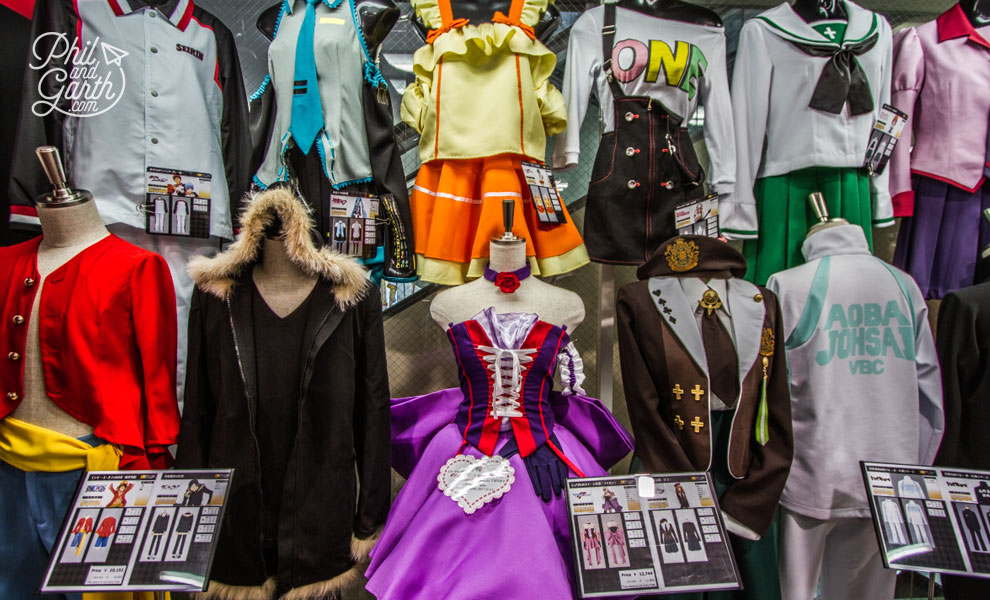 The district is also full of  Cos-Play stores, if you want to dress up as your favourite comic book hero, you can get anything you need from Akihabara, wigs, uniforms and even axes and swords to complete your costume. Maid Cafes are prevalent here, so what’s a maid cafe? Well its difficult to describe, you must have seen photos the Japanese women dressing up like saucy school girls well they do in these cafes and the girls are waitresses.  No they aren’t selling sex, I know it’s difficult to believe, but they are very chatty and are there to make your time in the cafe as enjoyable as possible by chatting to you. We think they are like a modern version of Geisha, if fact having had an evening with a Geisha we now understand what they do more.

The Yanaka neighbourhood is the complete opposite of the neon clad Akihabara. It’s a residential old part of Tokyo where traditional rustic style homes sit side by side in the little space available. We loved slowly wandering the streets here, the Yanaka Cemetry looked quite magical with hundreds of cherry blossom petals falling like snow. From here we made our way to the nearby Yanaka Ginza for lunch – this main street is stuffed full of little independent shops and restaurants and grocery shops for the locals. Shibuya was next to see the world famous ‘Pedestrian Scramble Crossing’, we headed straight to Starbucks opposite the crossing and waited patiently for a seat upstairs, for a great view, well worth waiting for and great people watching.  Although the staff in Starbucks weren’t that keen on us taking photos from there from some reason even thought every one was.  The other place to view the crossing is on the 7th floor at Mag’s Park observation deck it’s at the Magnet by Shibuya 109 Mall. Apparently during Tokyo rush hour as many as 2,500 people can use the crossing at once! 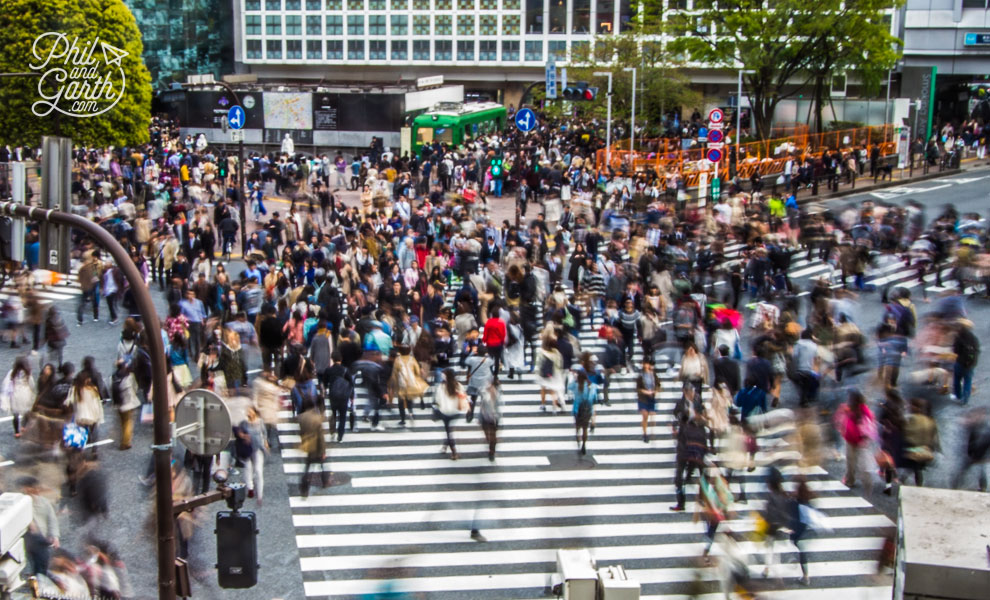 Our highlight of Tokyo was visiting Shinjuku at night to see the fantastic futuristic Blade Runner-esque skyline of neon, it didn’t disappoint at all, everything we wanted it to be and more.

We decided to find the street where the Channel 4 tv ident was filmed, so the night before we did some YouTubing frame by frame, Google Earthing and analysing Instagram pics, we soon found the exact spot to head to. It’s Kabukichō, the main street of Tokyos red light district, we read some scare stories on TripAdvisor, but we felt it was safe for us. Garth was in his element taking hundreds of photos of the tall neon signs. They look so vivid against the black sky and everything was enhanced because it was raining, so there were some amazing colour reflections. The noise was something else too, a loud confused crazy mix of electro pop, video game machines and teenage girls giggling. 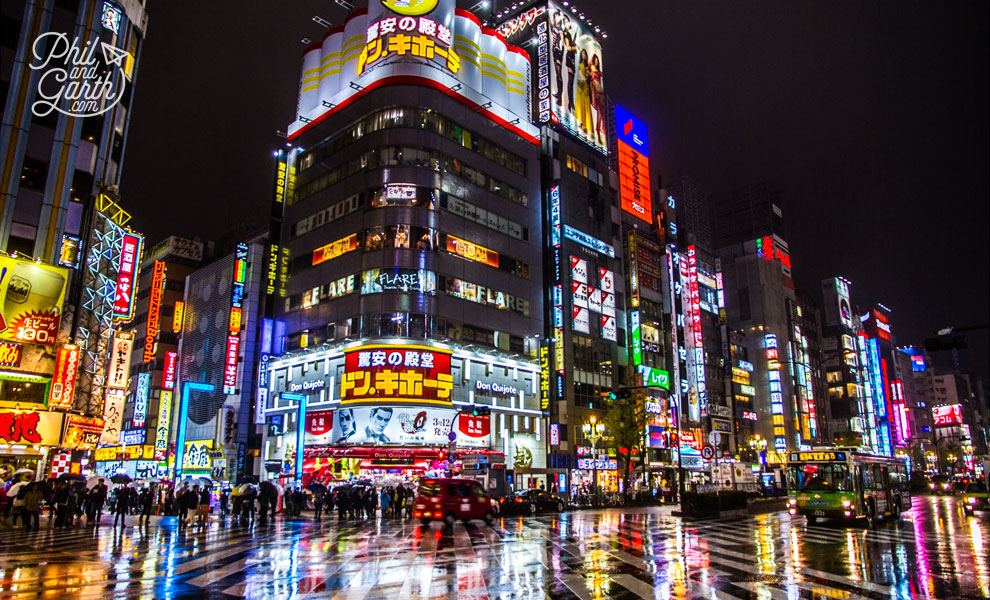 There are many temples in Tokyo, and we went to quite a few along the way. Sensoji Temple stands out as it’s Tokyo’s oldest and probably most iconic shrine. It’s beautifully detailed.  The smell is captivating too as dozens of incense sticks burn and people waft the smoke towards them which is believed to have healing powers.

Before you enter a shrine show respect by washing your hands in water at the purification fountain with one of the ladles provided. 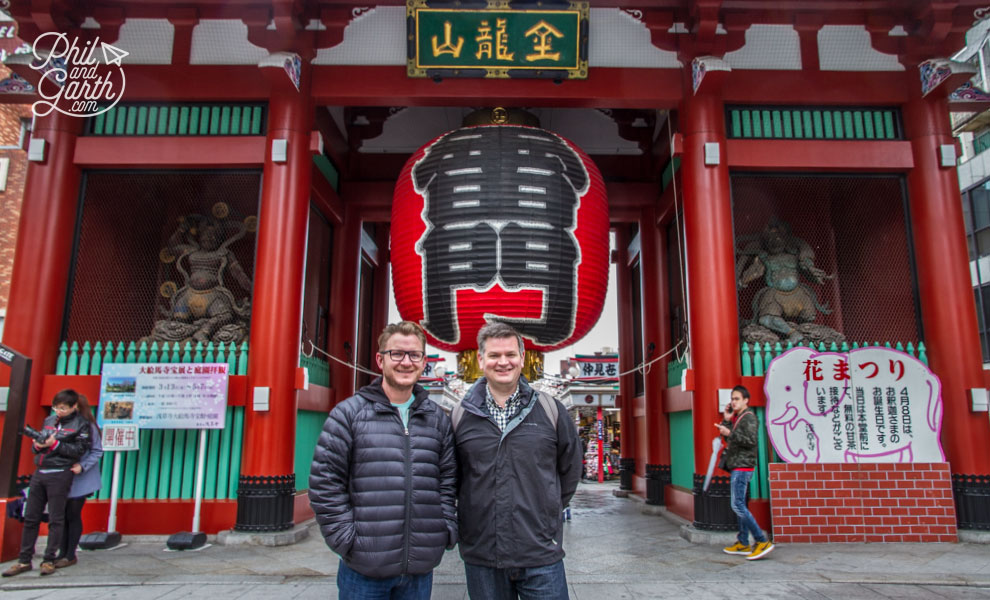 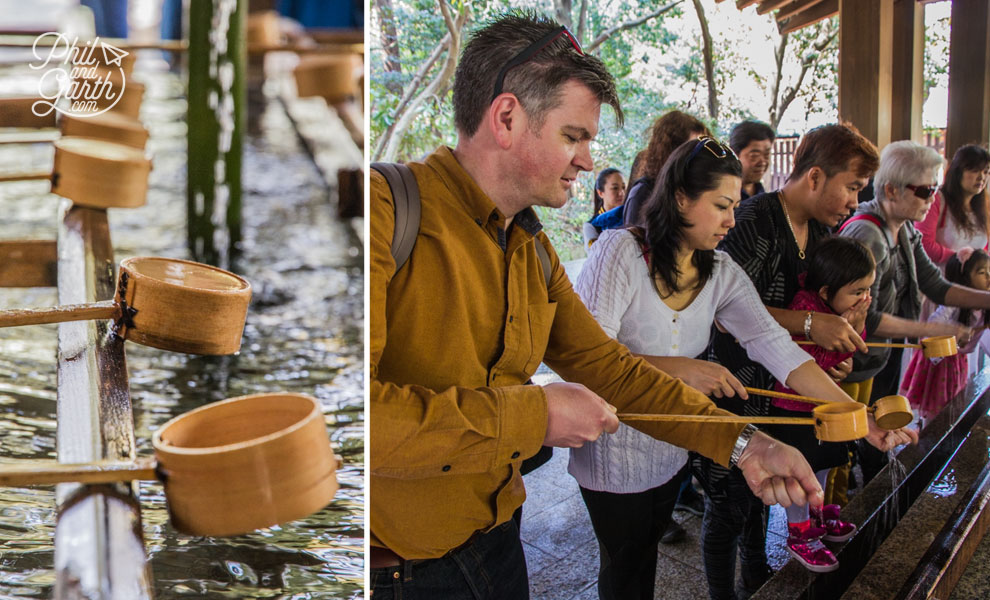 We decided to take the JR train out to Kamakura, it’s about an hour from Tokyo.  We had a wander around the town before seeing The Great Buddha of Kamakura, which dates back to 1251.  This monumental size bronze statue was really special to see, as worshippers burned incense, the smell in the air was lovely and fragrant, which made the trip worthwhile as the weather was so miserable. The Great Buddha of Kamakura

The Japanese take Cherry blossom viewing or ‘hanami’ very seriously – we had no idea until we got there.  When I say festival, it reminded us of music festivals in the UK, where hundreds of young people and families gather in parks and hold outdoor parties underneath the trees, whilst the older generation wander by on foot.  Parks are incredibly busy and have a lovely atmosphere with trees adorned in lanterns whilst petals fall all around you, to the sound camera shutters all going crazy, as the Japanese contest to get the best pictures. 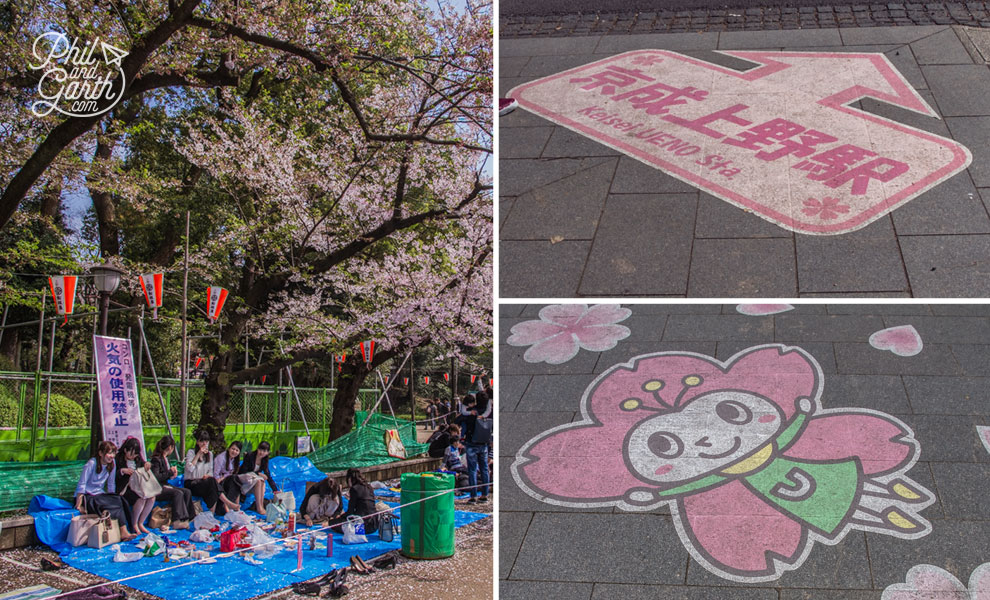 Signs guide you to the Cherry Blossom

The Japanese people are so respectful to each other, there’s no shouting on the trains or in the streets. We asked a lady why do so many people wear masks? she said it was so they didn’t spread their germs to others, especially if they have a cold. A lovely couple asked us if they could offer their help, when we looked lost and confused in one of the tube stations. People in Tokyo are so kind and very patient, like not jaywalking, instead obeying the red and green man crossing signs. A perfect example of how human civilisation should behave towards each other. 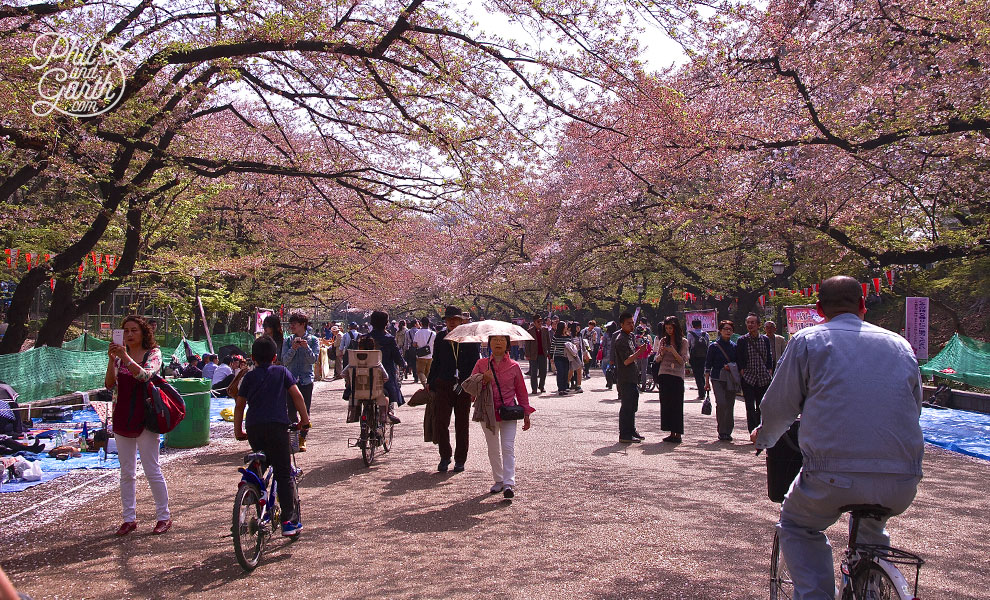 Other Attractions of Tokyo Great read. Am heading there in the spring. Even more excited now I’ve read this! Some great tips too

Wishing you a great trip Emma!

Thanks guys, we’ve booked for early April and as always your travel tips I’m sure will come in handy, there’s just so much to do and see it’s great to have it all simplified.

Wow – great post and what amazing pictures! Thanks for sharing, now we are definitely excited about visiting!