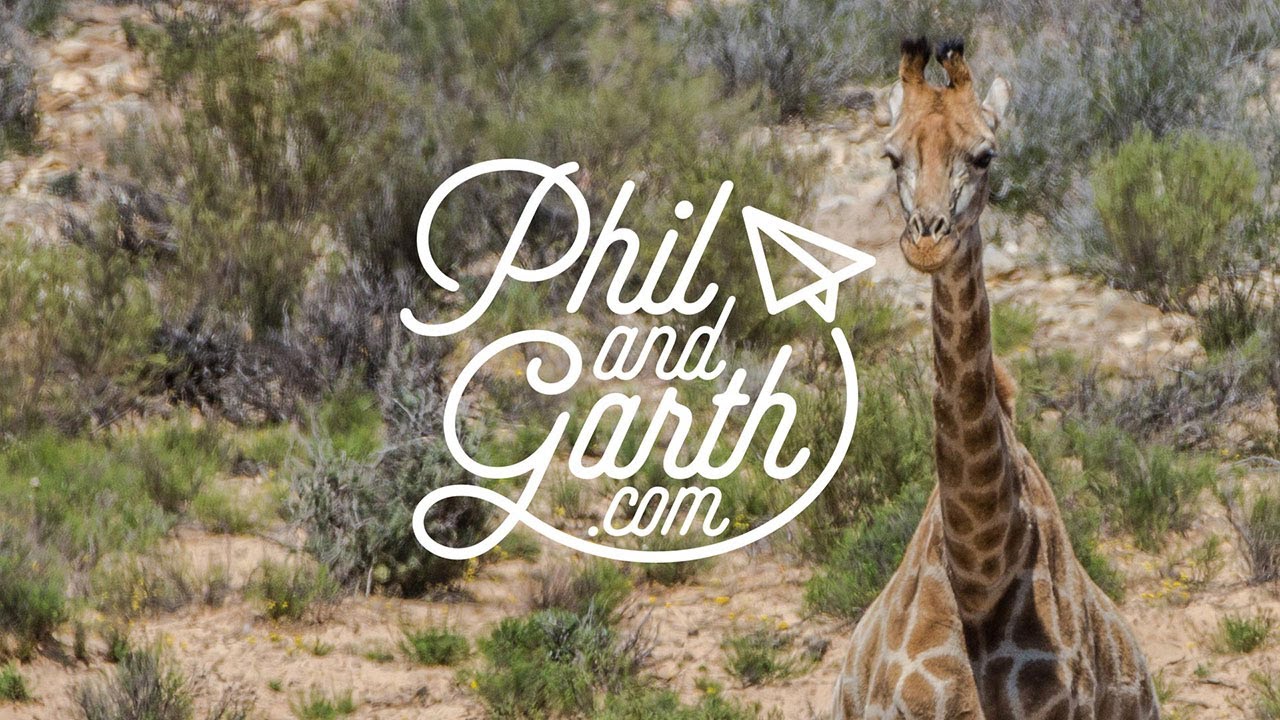 Our main reason for travelling to South Africa was to go on a bucket list safari. Having never done a safari, we didn’t know what to expect, so we booked a couple of options. A 2 day safari at Kruger National Park and a big 5 game reserve near Cape Town at the Aquila Private Game Reserve which we’ll tell you all about in this post and if it’s worth the money.

The Aquila Private Game Reserve located in South Karoo, 2 hours from Cape Town is heavily advertised in luxury Cape Town hotels as “the best way to go on a safari just 2 hours from Cape Town”. We noticed the Aquila reserve also featured on the BBC tv series The Apprentice. It all looked and sounded good, so we paid for the Morning Safari Full Day Tour. We were both really excited about what it was going to be like.

Getting to the Aquila Private Game Reserve

We were picked up by the Aquila minibus from our hotel in Cape Town at 6am and started our 2 hour drive. Despite the early start, getting there was a lovely drive through the mountains past vast numbers of vine filled fields. Although we did feel a little uneasy about the warning signs on the road “Hijacking Spot For The Next 30km” and “Danger Zone – Do Not Stop On Freeway”.

We were shocked to pass a township in a beautiful valley. Until then we thought townships were just urban, limited to cities, but no, there’s a real contrast between rich and poor even in the rural countryside.

Once we arrived at the Aquila Game Reserve we checked in with a welcome drink and paid our £300. We went straight through to the restaurant for the buffet breakfast. It was very busy with lots people and fairly well organised. 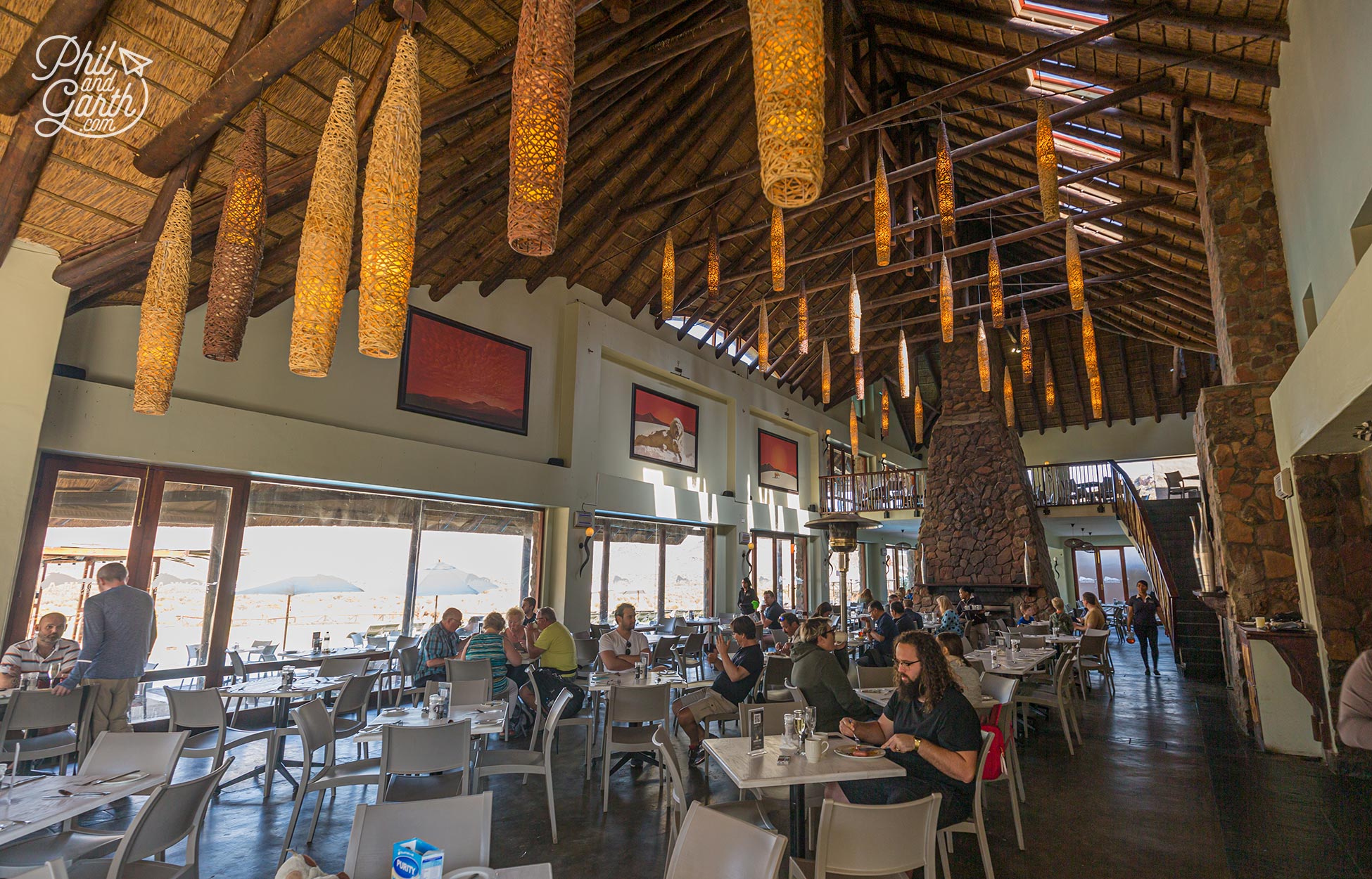 The canteen style restaurant where we ate breakfast 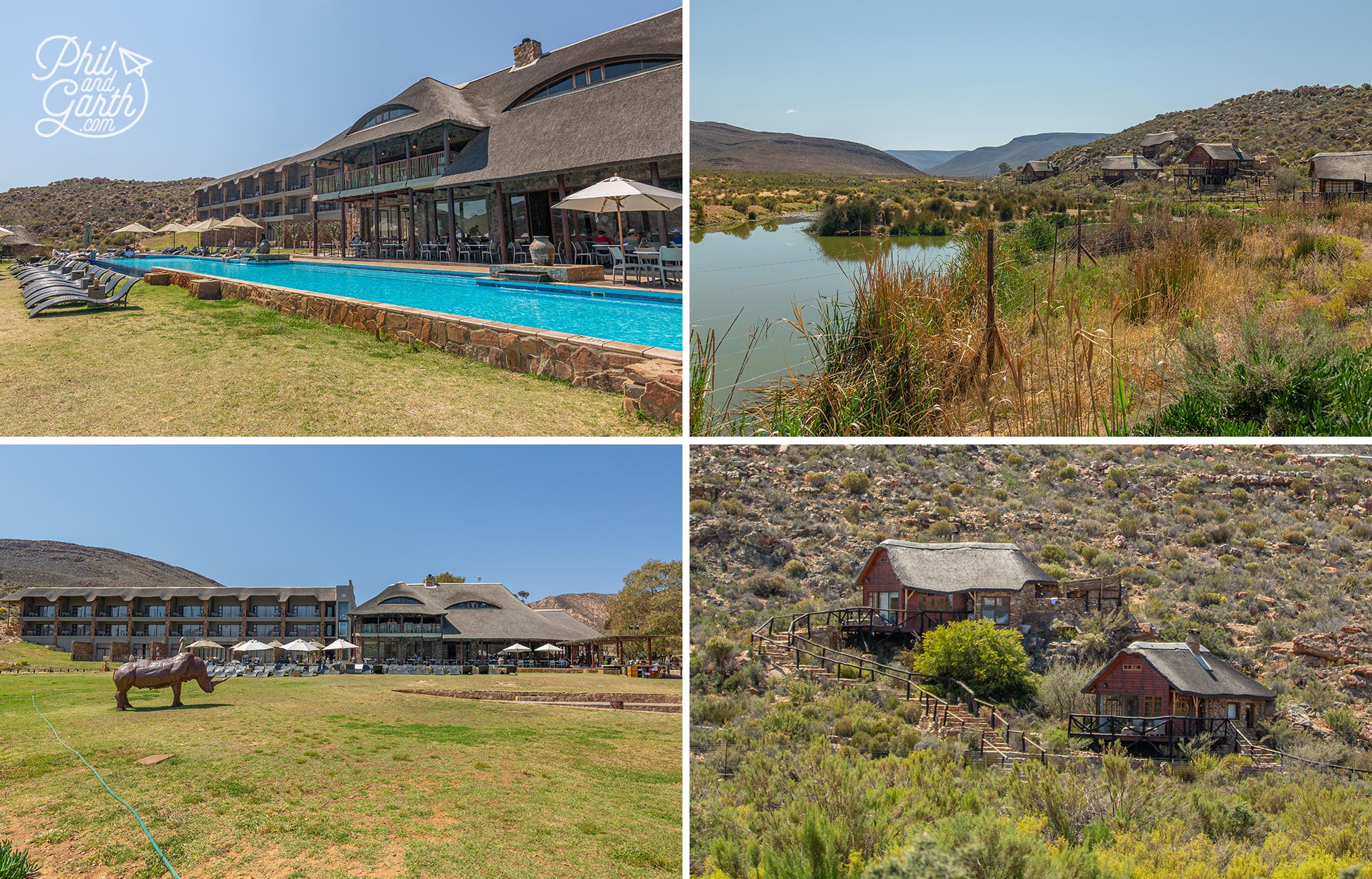 The Aquila Game Reserve is set in 10,000 hectares that’s 38 square miles. This region of South Africa on the Western Cape is not known for game reserves because it has a very dry environment. It was good to hear Aquila does conservation work at their reserve and cares for many rescued animals.

Time to board our vehicle for our morning safari, and before we knew it we were off! Both excited with anticipation of what we might see on our game drive. The terrain of the Aquila Game Reserve is rocky and hilly. The vehicle truck seats about 30 people and is very bouncy and bumpy, so be warned it’s like being on a fairground ride! What struck us was how Aquila’s landscape is very barren and sparse with very little shelter for the animals as there’s no large trees to provide shade or food for giraffes to munch on. 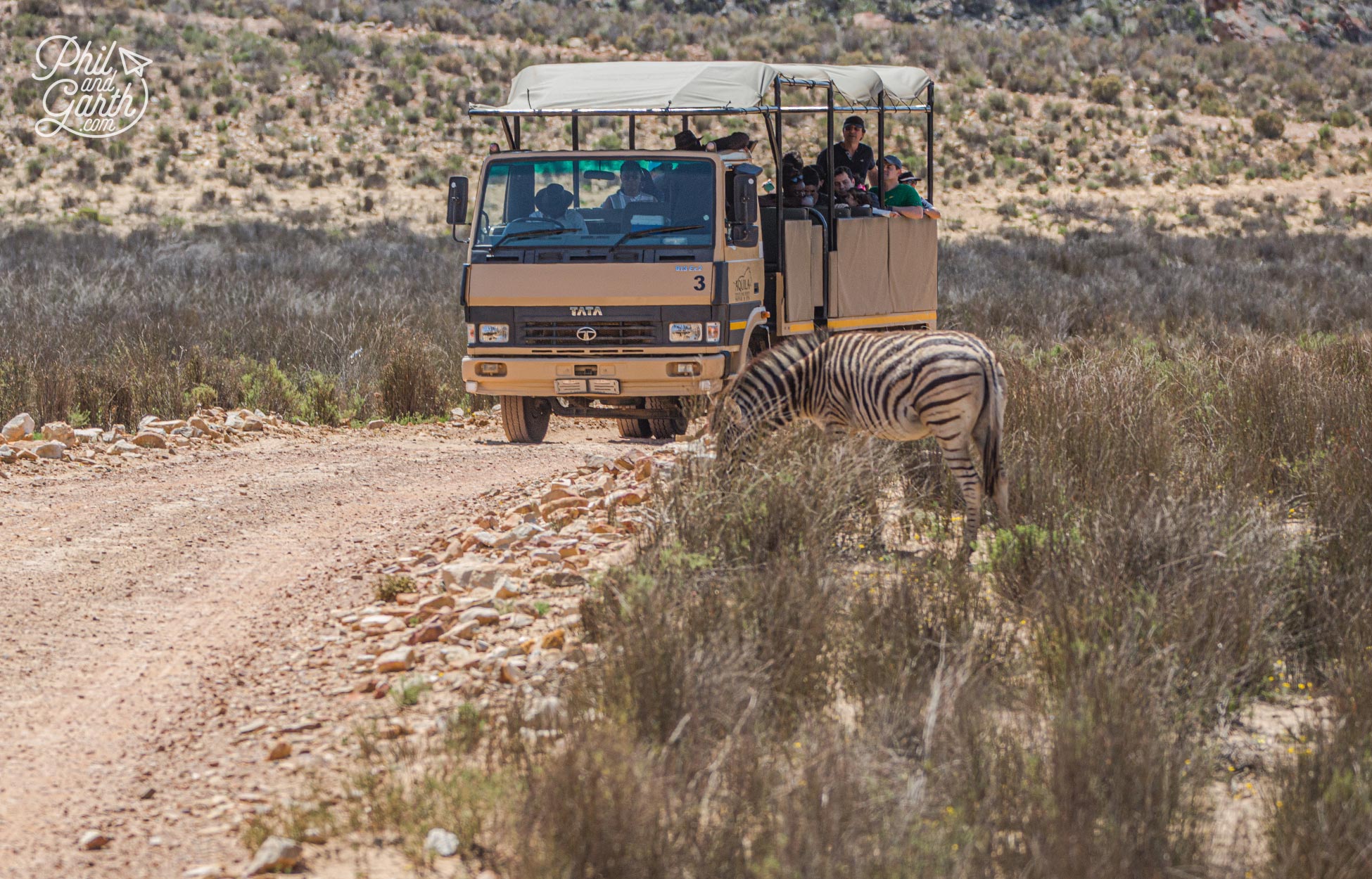 The vehicle trucks are bumpy! 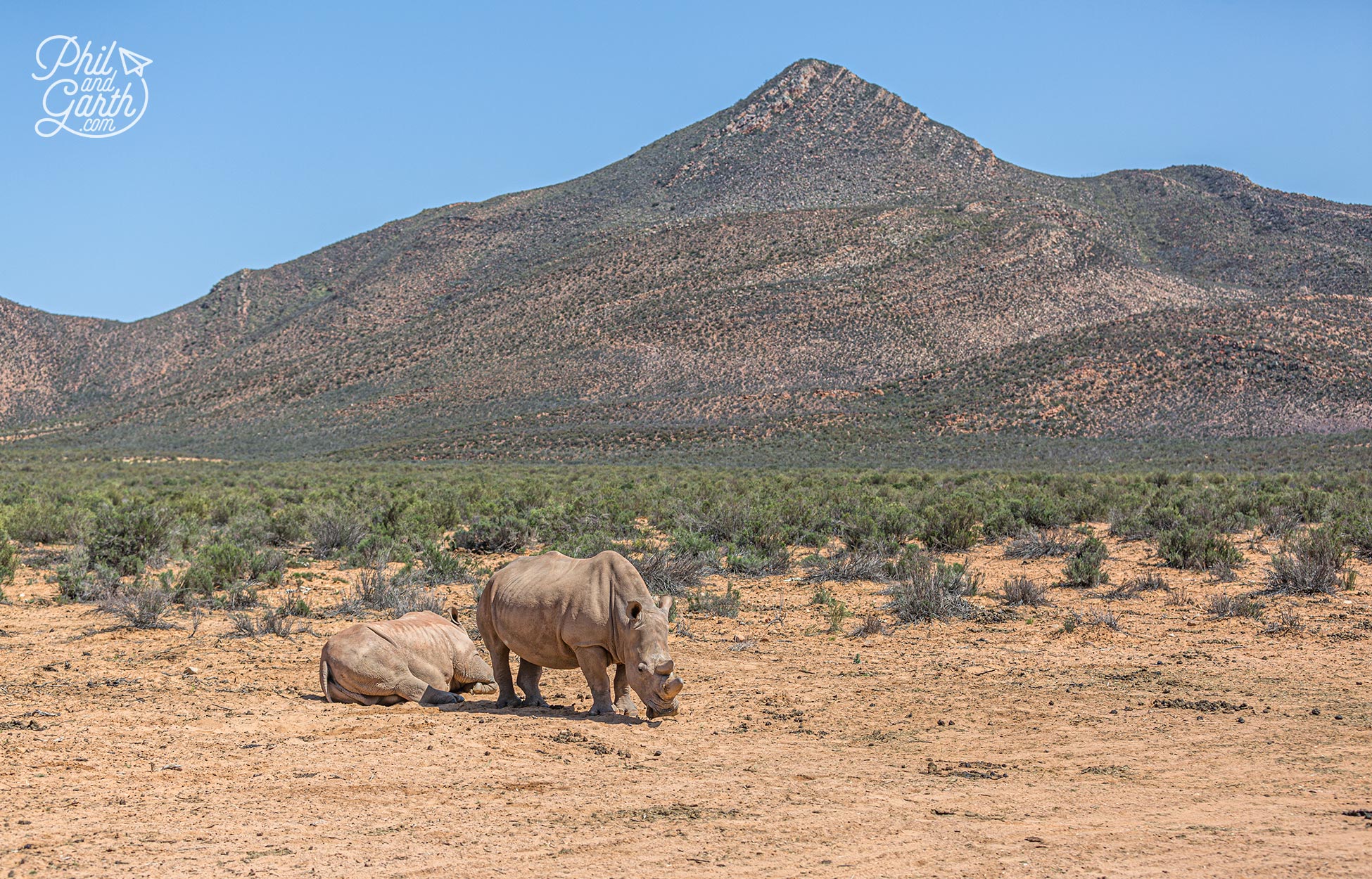 2 Rhinos at the Aquila Game Reserve 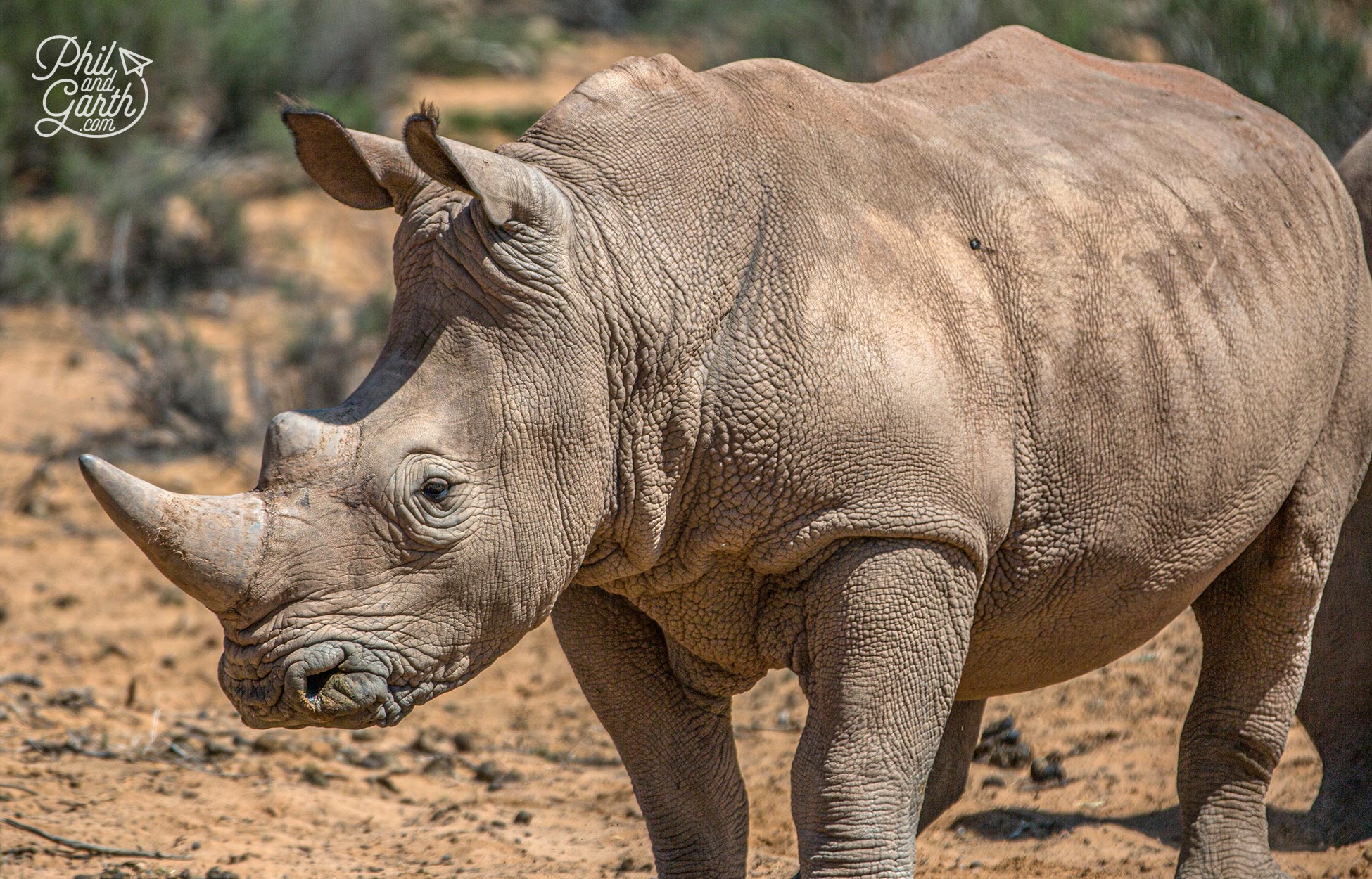 We got very close to this rhino A male ostrich is recognised by black feathers 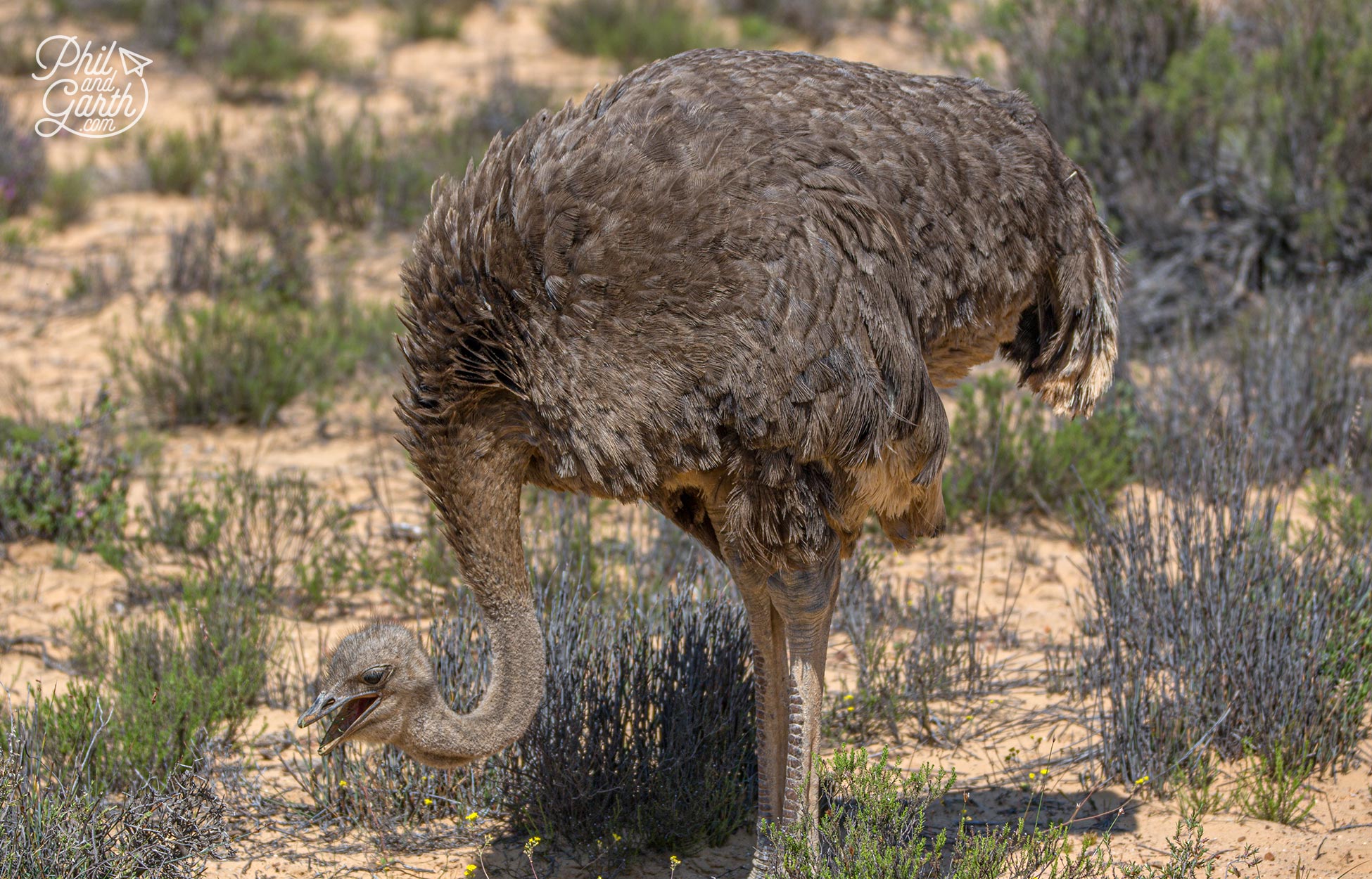 A female ostrich is recognised by brown feathers A couple of hippos in the lake 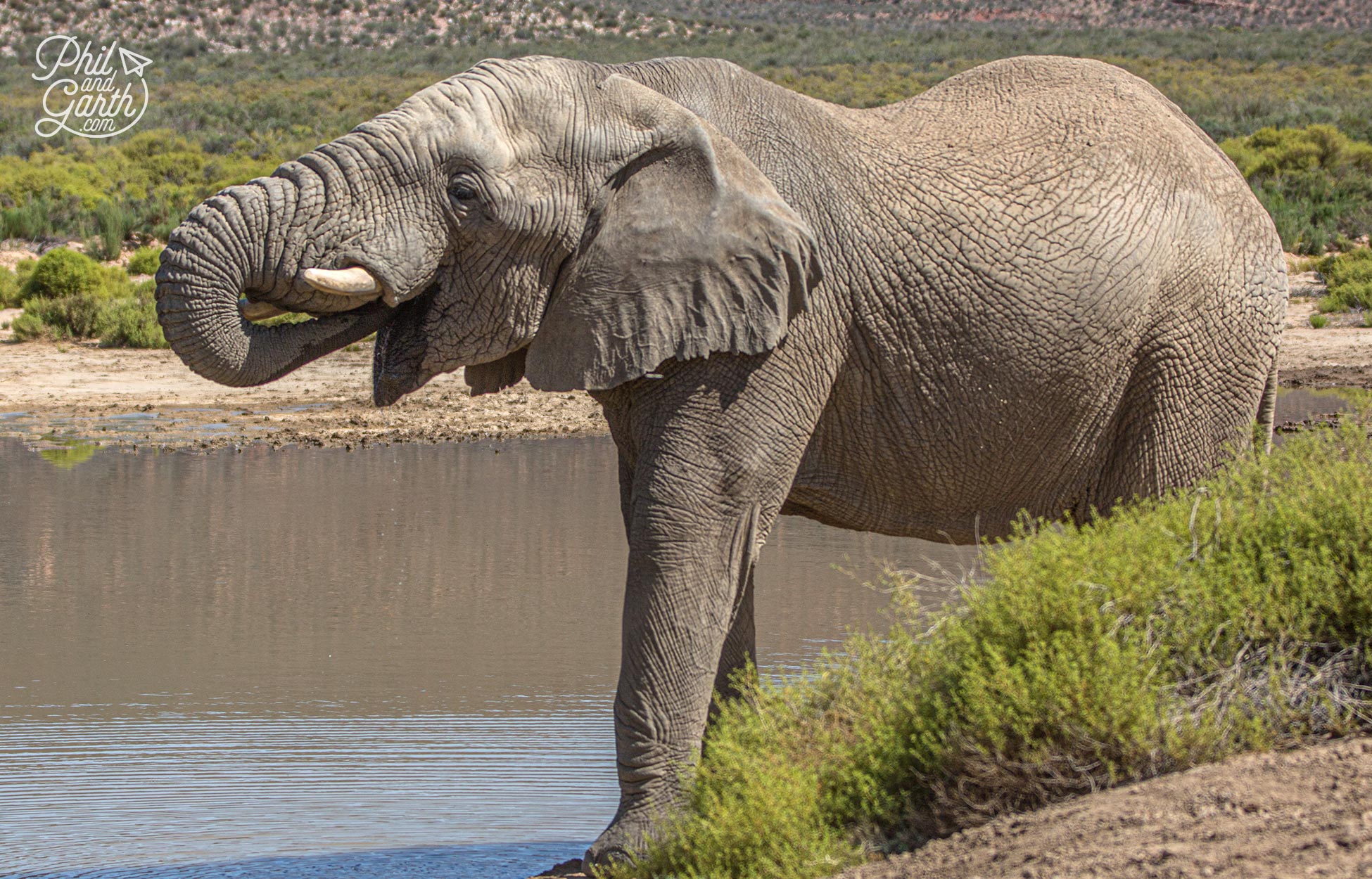 An elephant drinking some water at the lake

Our guide/driver was excellent and shared lots of stories about the animals and stopping to point out different things. We loved all his animal trivia – Did you know a giraffe can kill a lion with a leg kick? and it takes a pride of lions to kill a giraffe. You can’t ride a zebra because they have a weak spine, which is how lions can kill zebras because they know to attack its back. Oh and if you are being attacked by an ostrich lie on your stomach right away as the ostrich can’t kick that low. If you have a bald head then it may think you are an egg and will sit on it for 6 months! 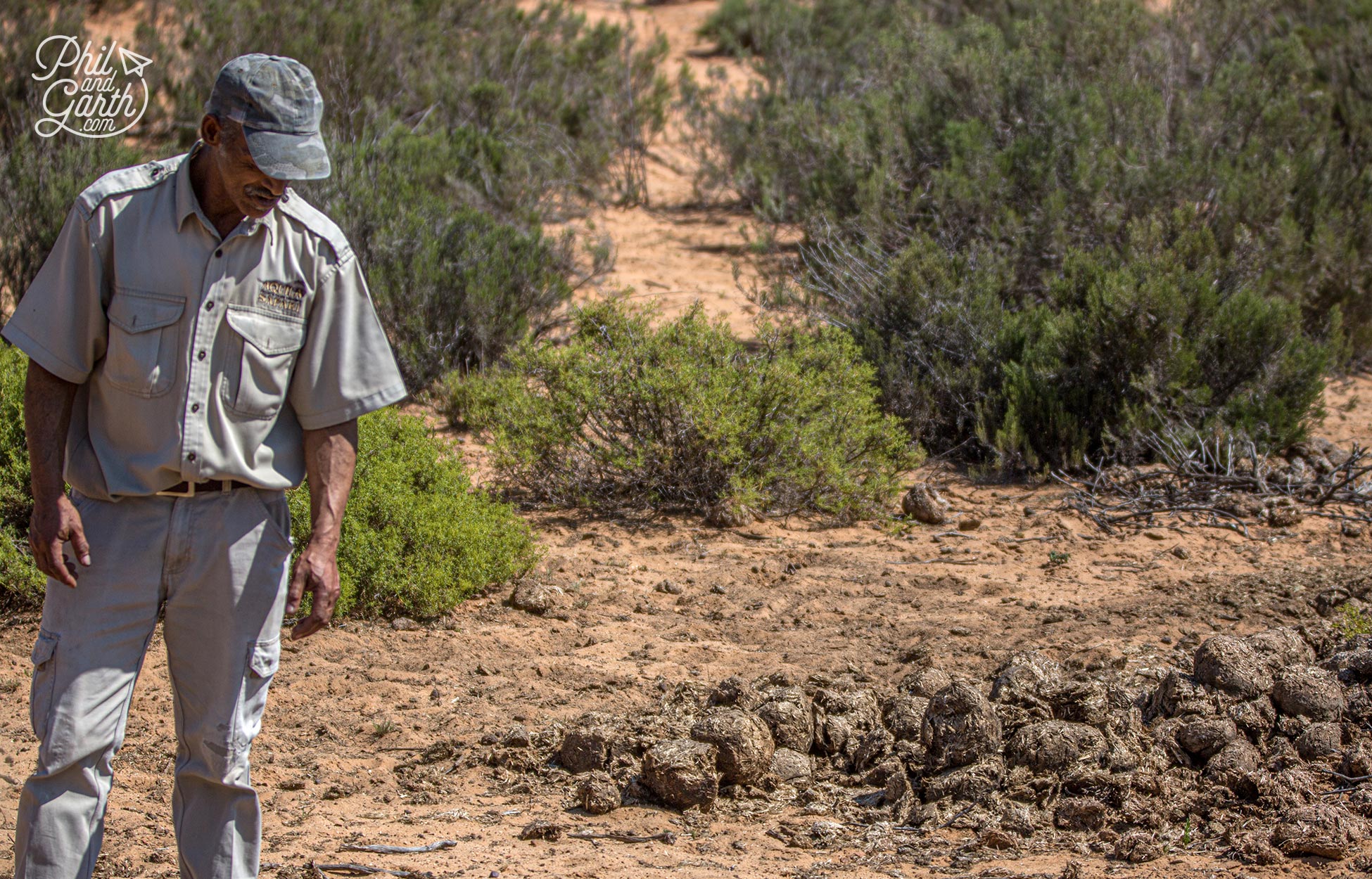 Our guide examines some dung 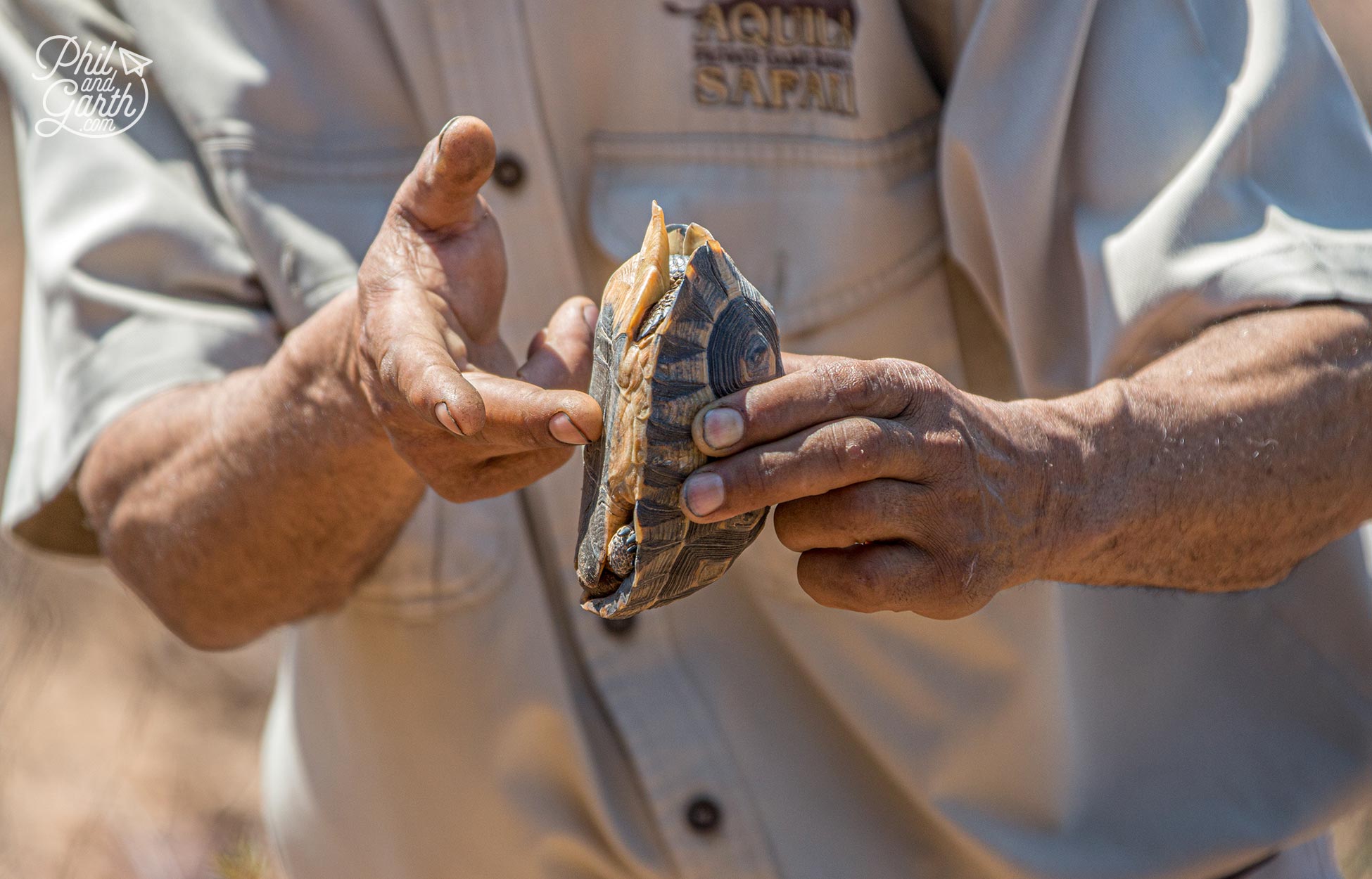 And shows us a small tortoise We past a few zebra at Aquila

Some more trivia – You can recognise a poorly zebra because it will have a limp maine. Did you know the ostrich is the world’s largest bird? A male ostrich is black, whilst a female has brown feathers. 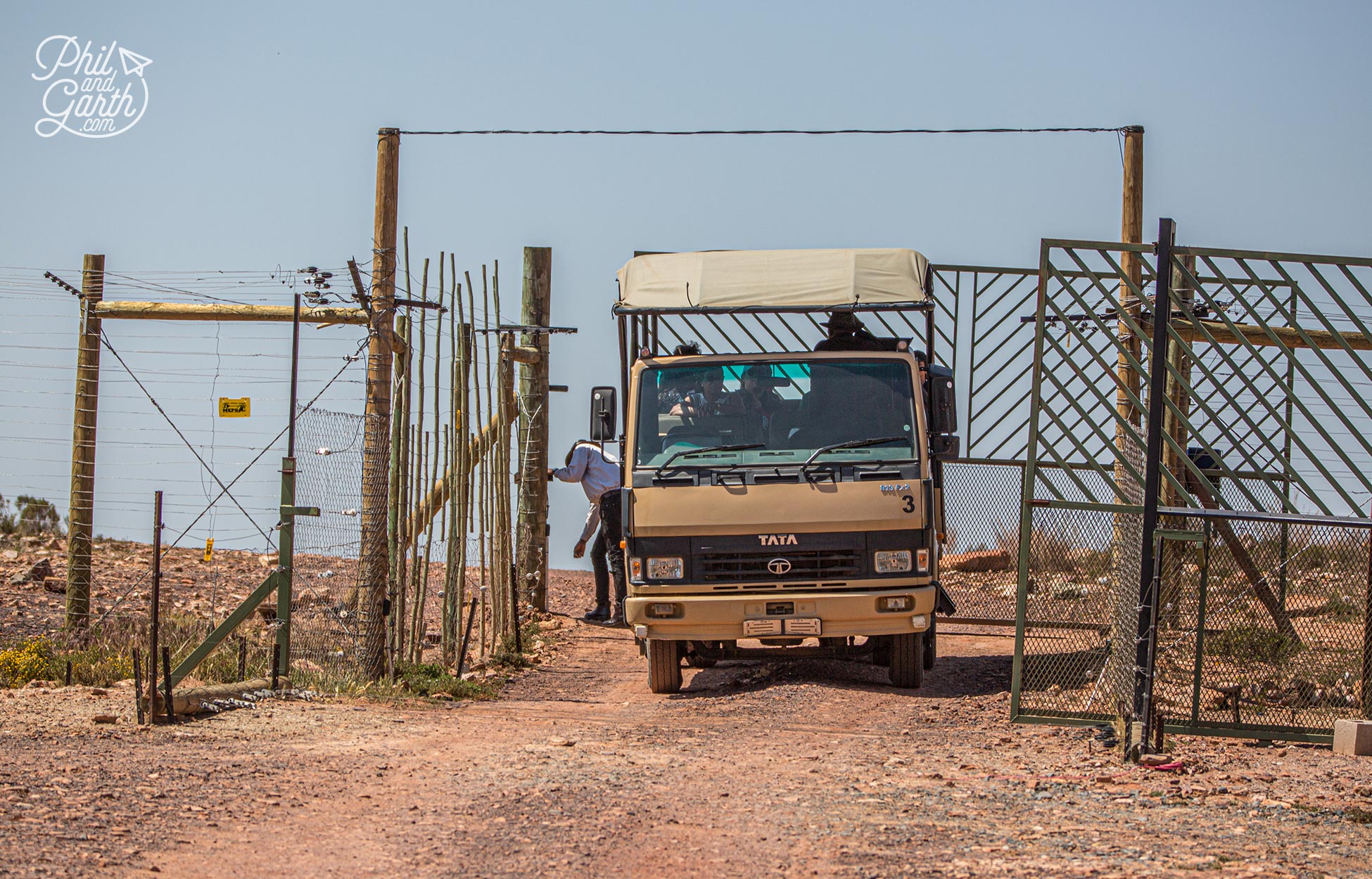 Going inside the Lions enclosure A lioness asleep on the rocks This lioness looks like she was ready to pounce on us! Some wildebeest at a watering hole Phil enjoying some sparkling wine at the refreshment stop

Before we knew it the game drive was over! It lasted 2.5 hours with a refreshment and loo stop at the foot of some mountains.

After lunch you have a couple of hours and can enjoy the loungers and swimming pool included in the price. Or pay and book optional extras like Spa treatments, horse back riding or quad biking.  We ordered some drinks from the bar and Phil went swimming, whilst watching the animals in the distance with his binoculars. Garth chilled out in the shade and used the free WiFi. Leisure time in the pool after the morning safari

Our Verdict on the Aquila Private Game Reserve Safari

The service at Aquila was good and it has a nice upmarket feel and looks like it would be a nice place to stay overnight or try the spa. BUT overall we thought the safari felt like Jurassic Park. Mainly because our truck had to enter different gates that fenced off animals from each other. The lions are kept in a separate enclosure and fed meat, so they don’t hunt. You also see the lions straight away, you don’t have to search them out, so that part didn’t feel wild or natural. There’s also lots of other groups of tourists, so that means you pass lots of trucks. If you think of it as a ride through a big zoo rather than a safari that should give you a better idea of what to expect. Whilst we enjoyed our day trip to Aquila, it’s not wild, we easily preferred our ‘out in the bush’ wild safari experience at the Kruger National Park because it felt more authentic having to search or go on a chase for animals in a bigger and more wild environment. It’s also very expensive we weren’t sure if it’s worth the money, maybe if there had been another game drive after lunch that might have satisfied us a lot more. Phil and Garth at The Aquila Private Game Reserve 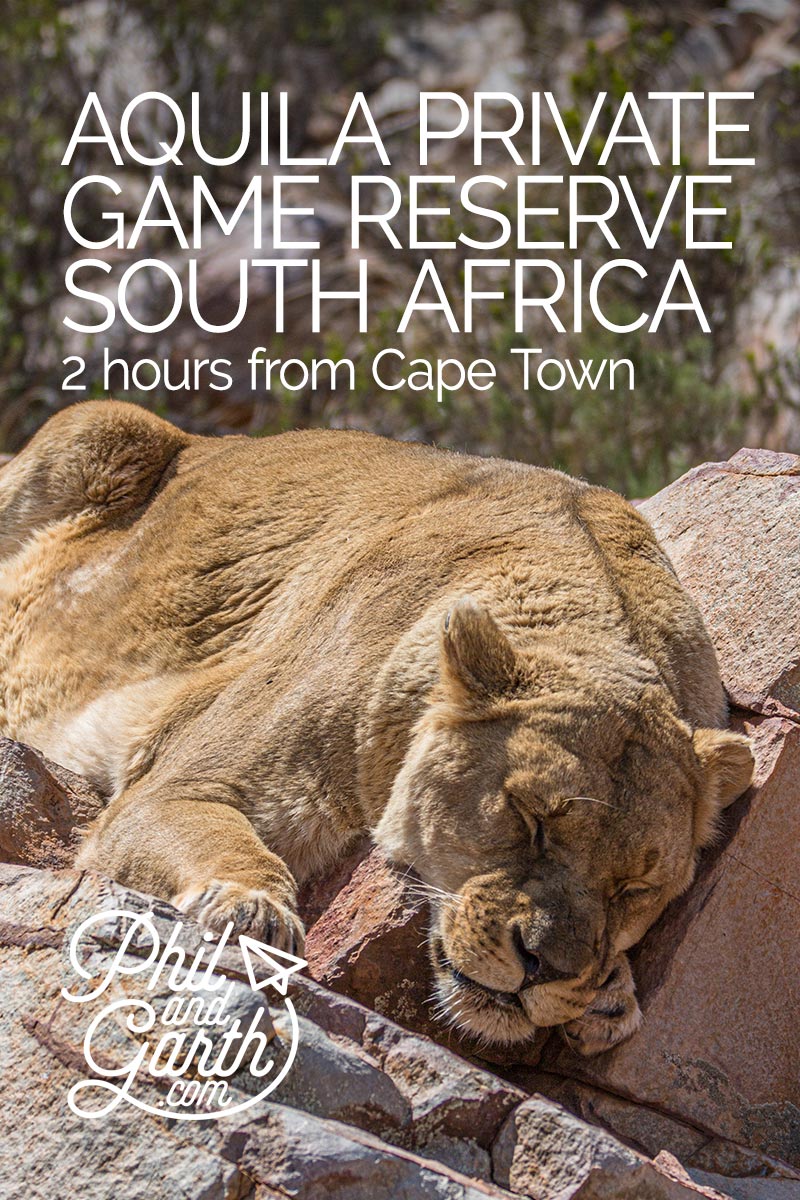