Hermanus is a pretty coastal town on the Indian Ocean and surrounded by mountains. Hermanus is the whale watching capital of South Africa where every year between August to November an estimated 100 Southern Right Whales will gather in the town’s Walker Bay.  It’s all about the whales here, so much so, Hermanus hosts an annual 3-day Whale Festival in September. The World Wildlife Fund (WWF) has ranked Hermanus whale watching as one of the best places in the world to observe whales from land. Passing vineyards and canola fields on the way to Hermanus

We’d just finished driving the Garden Route and the approach into Hermanus is really lovely too. Dozens of vineyards sit back to back in valleys and colourful canola fields which look just like rapeseed fields next to our house in England during the summer.  Unfortunately we had terrible weather for our stay! it was cold, windy and very wet but it didn’t dampen our spirits or enjoyment. A Southern Right Whale in Hermanus breaching out of the water A whale showing ‘sailing’ behaviour. The tail can measure 5 metres across 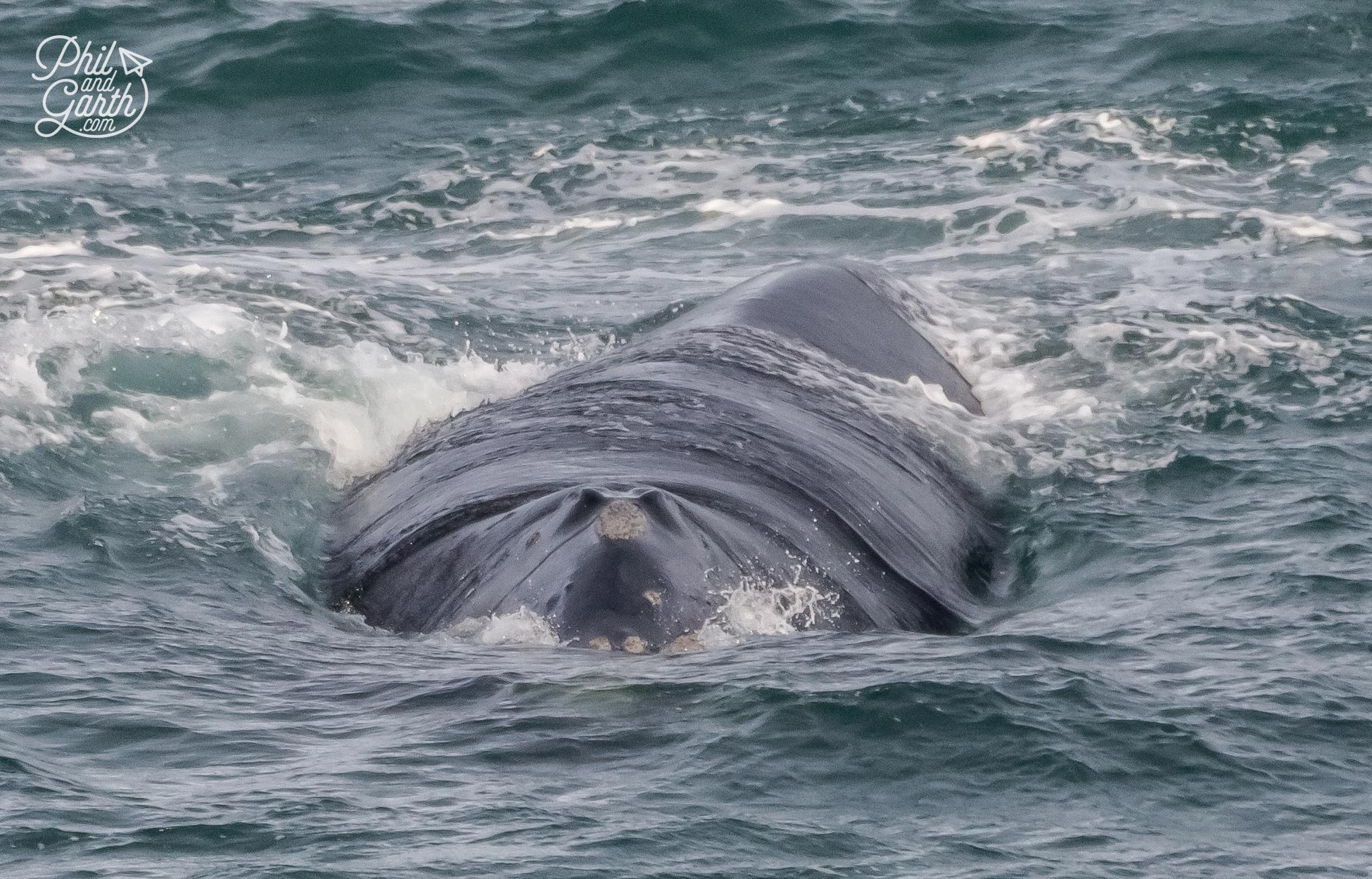 We’ve never done whale-watching before and thought it was brilliant! Its actually awe-inspiring watching huge whales lift their bodies out of the water and then come crashing down, again and again. When they breach out the water, they put on a great water acrobatic show (not the Seaworld kind!) However we learnt to be patient, constantly scanning the bay to gasps of delight when someone spots a whale in the distance, to sighs from us when we realised we’d missed it!

Whale watching is July to end of October, so we timed our visited in September perfectly. Hermanus is considered to be the best place in the world for land-based whale watching. We loved it especially when the whales came right into Walker Bay as they are much closer to the cliff edge and you can really see all the detail. Humpback Whales also migrate here, but we don’t think we saw any. Photographing whales is really hard though, for best results you’ll need a zoom lens, just take lots of quick-fire photos if your camera can do that. 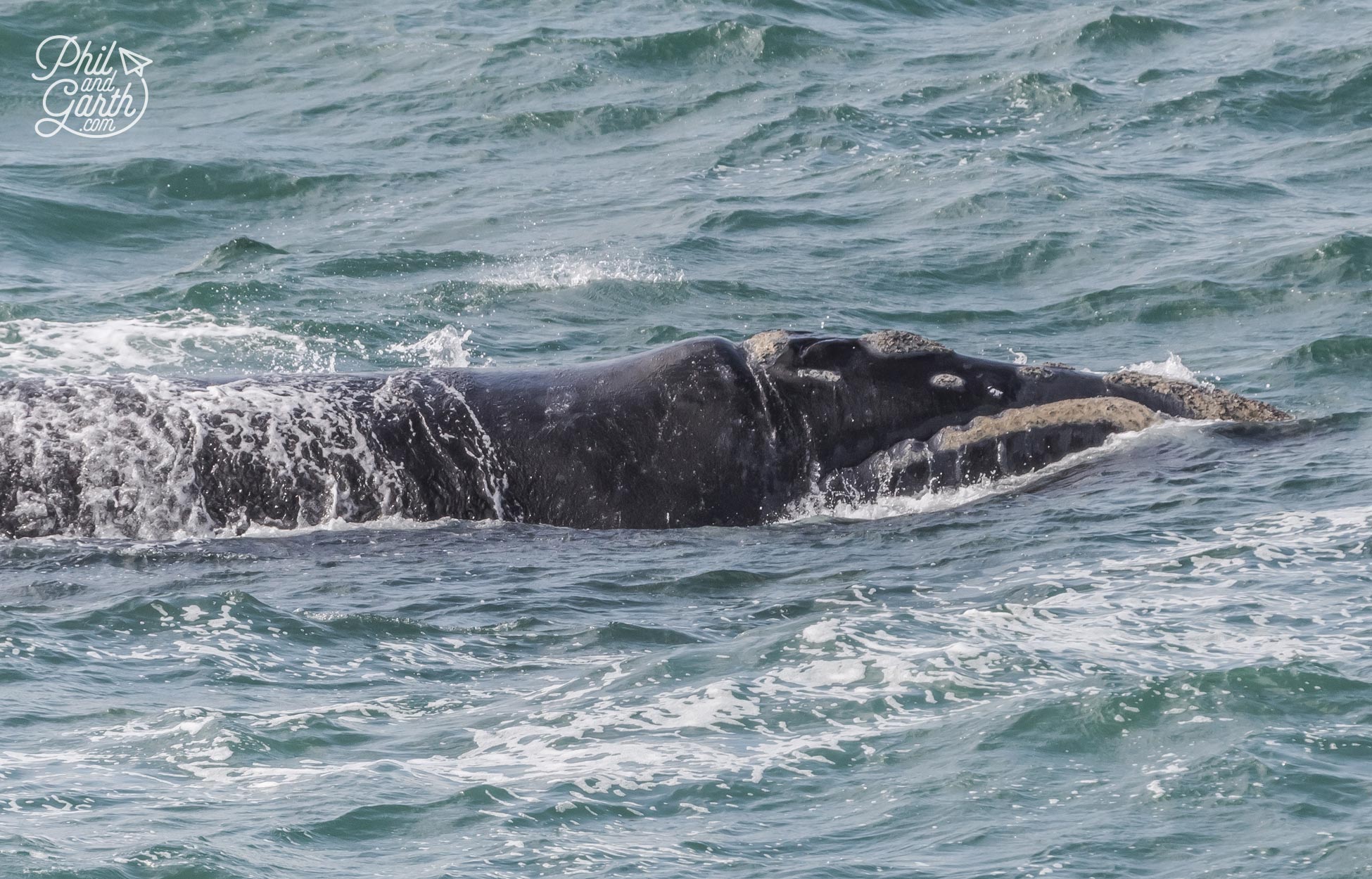 These huge and gentle giants are mesmerising to watch Trying to get that iconic tail shot head on, but not succeeding!

The Southern Right Whales were hunted to near extinction, fortunately they are now a protected species when commercial fishing ended in 1935. The good news is numbers are growing at 7% each year, it’s estimated there’s now 14,000 in the Southern Hemisphere. However they still face threats from pollution, net-entanglement and collisions with ships. A complete contrast to the North Hemisphere where the North Atlantic Right Whale are critically endangered with only 300 animals left. 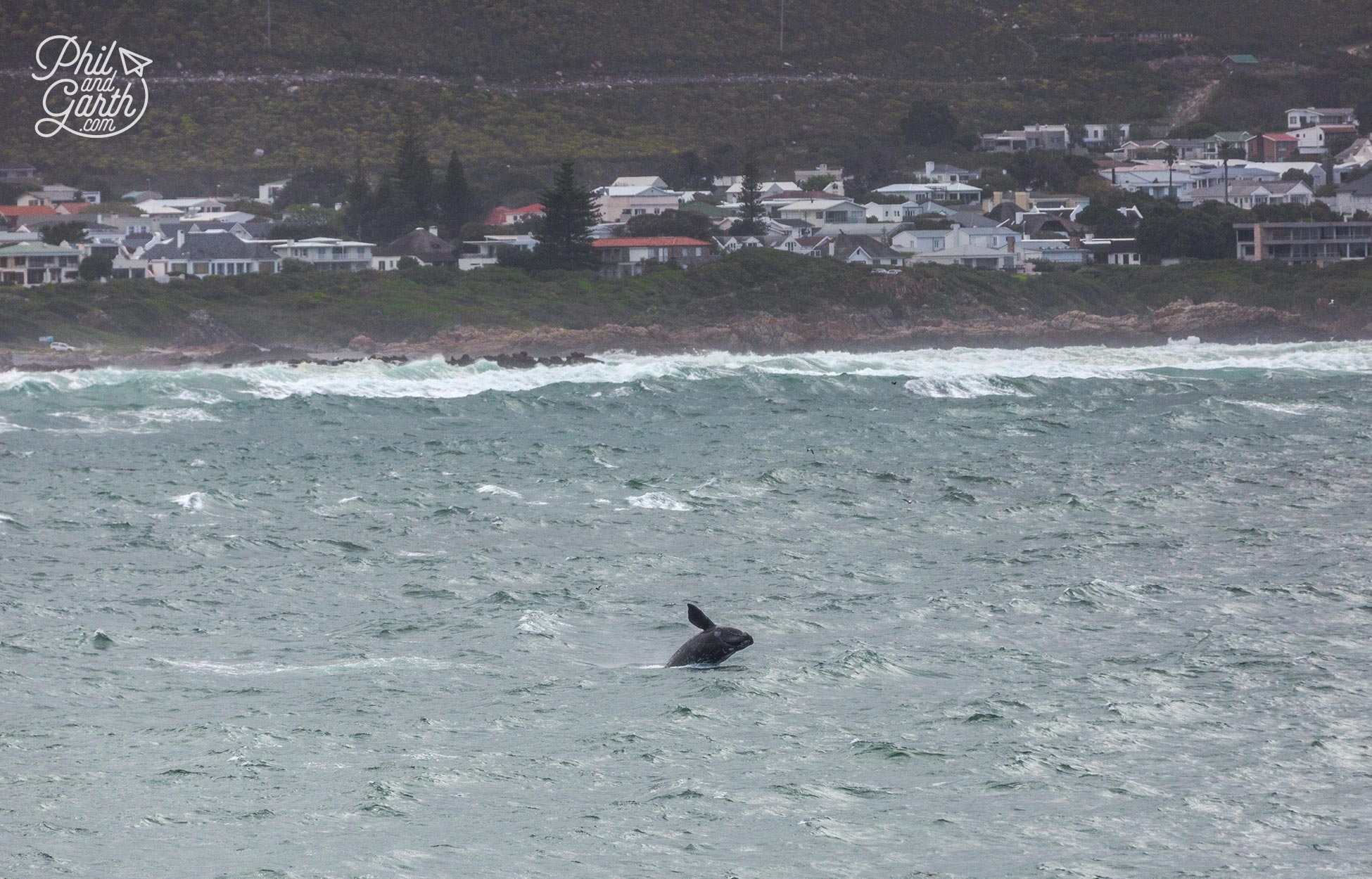 People gather at one of the cliff edge viewing platforms 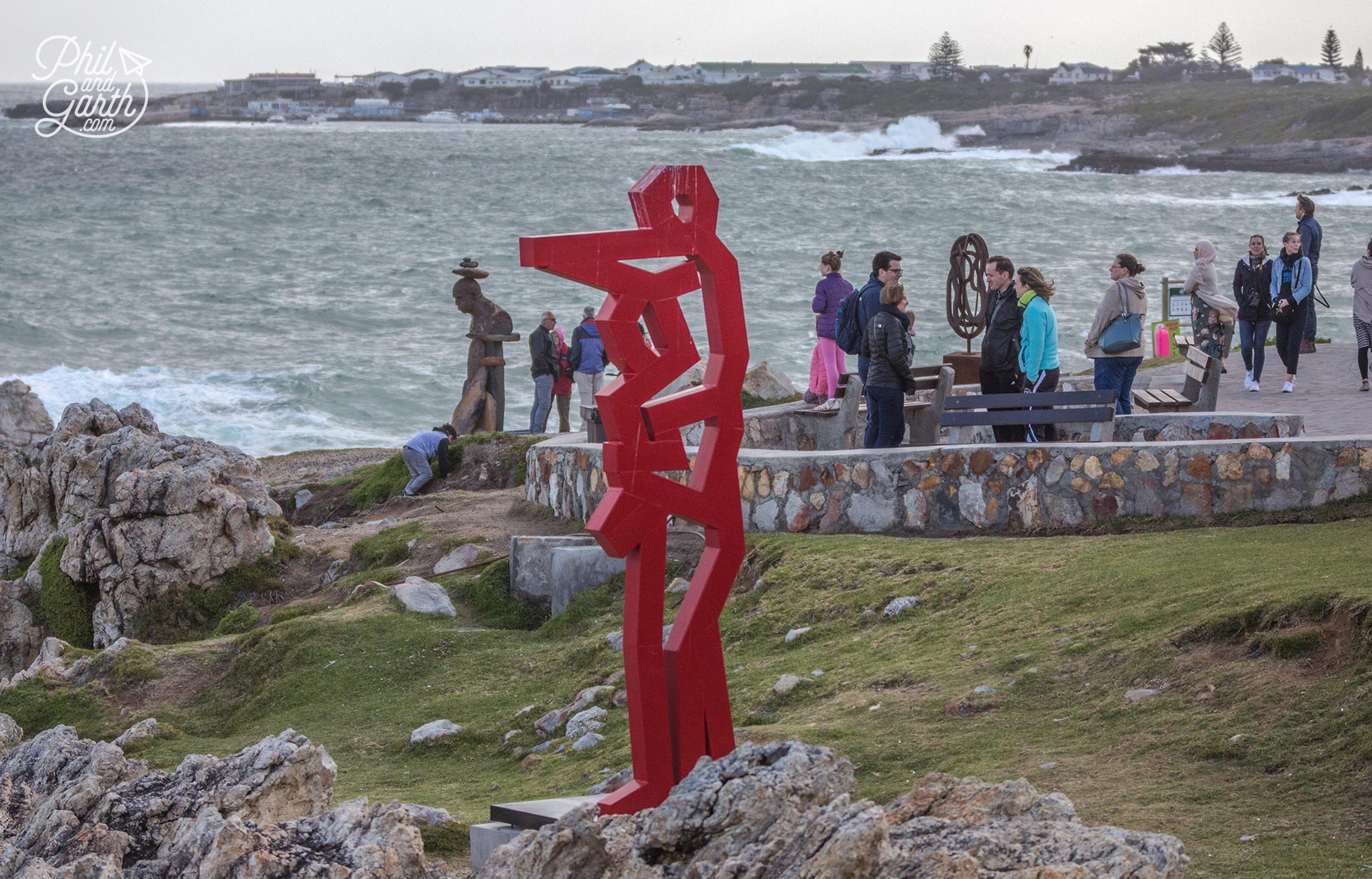 Lots of art and sculptures on the main promenade. We saw dozens of these guys – Rock Dassies on the cliff

The whales demonstrate 4 distinct behaviour patterns, but little is known about it. 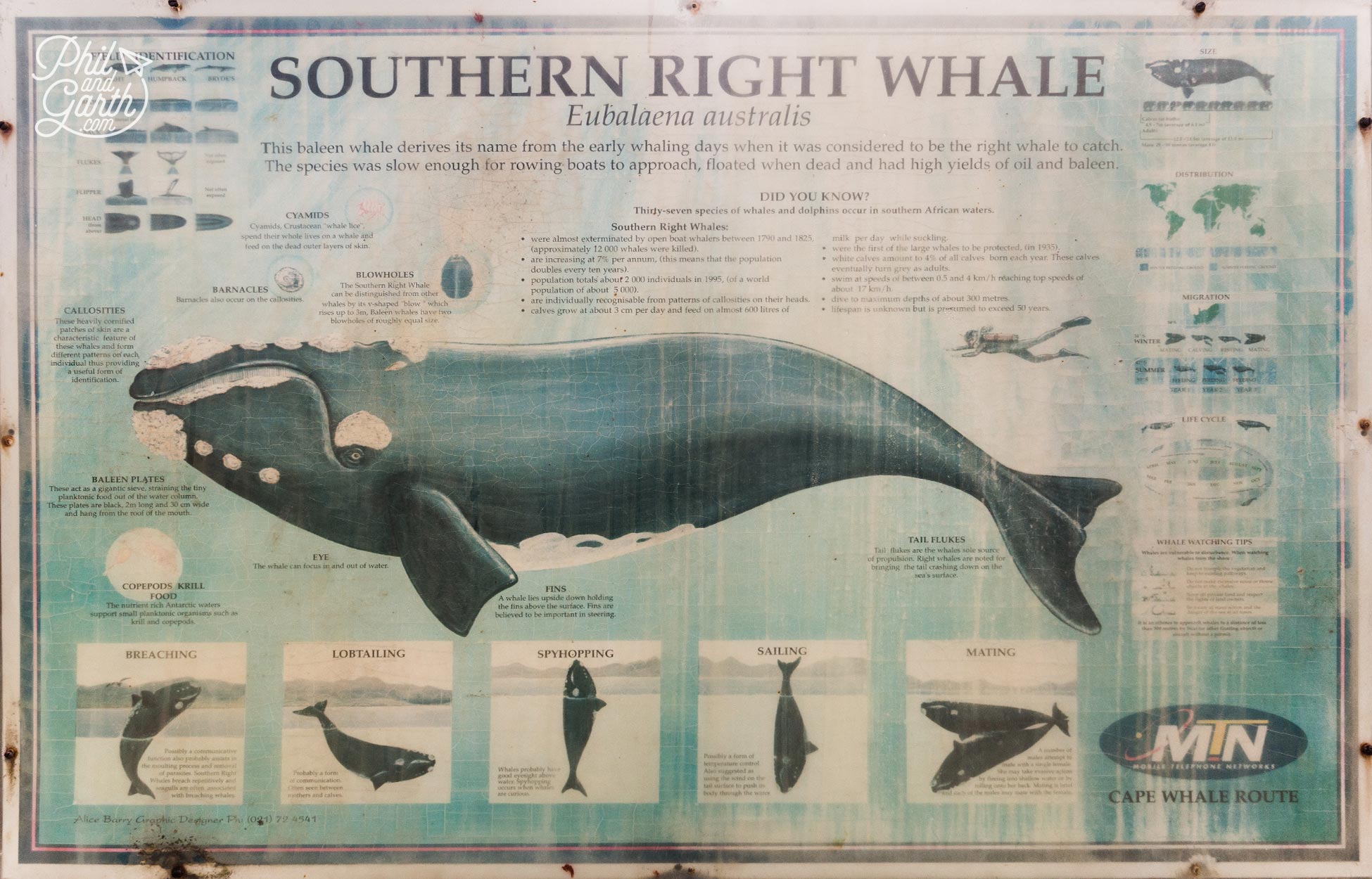 There’s loads of companies in the harbour offering whale watching cruises. Catamaran and cruise boats will get you closer to the whales without disturbing them. But sadly for us the weather was so bad it meant the swell was too dangerous, so every single boat trip was cancelled during our stay 🙁  We noticed some of the cruises offer photos and videos for sale immediately after your trip – we thought this was a genius idea for people with no cameras or if you just wanted to enjoy the trip. Hermanus centre is pretty small so east to navigate by foot. There’s lots of lovely art galleries, open air cafes and 3 museums. Our favourite time was having lunch at one of the cafes and still being able to watch the whales breaching, magic! 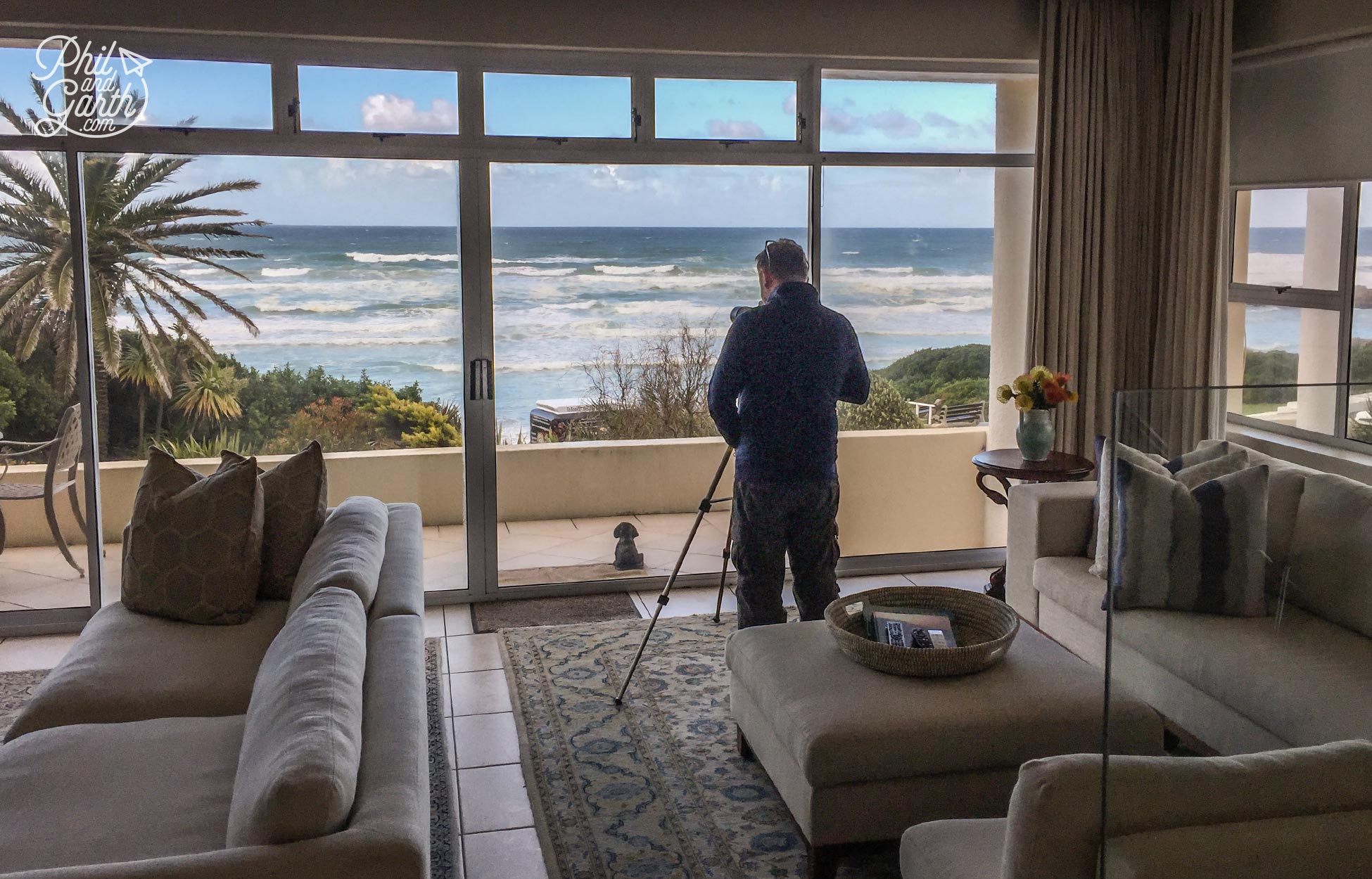 Hows this for a view! Garth spotting whales through a monocular at our hotel

Due to some mix up with overbooking at our designated hotel, we got to spend the night on Voelklip Beach in a luxury suite at the Hermanus Beachfront lodge, what a result! It was amazing with uninterrupted views of the sea to wake up to! Talk about having a whale of a time in Hermanus!

We also took a hike in the Fernkloof Nature Reserve, it has stunning views over Hermanus and the bay. There’s various hiking trails and the mountains are covered in fynbos (South Africa’s indigenous vegetation). Garth was struggling with his fibromyalgia – with bad pain in his legs so we had to stop, even though the hikes here aren’t that demanding. 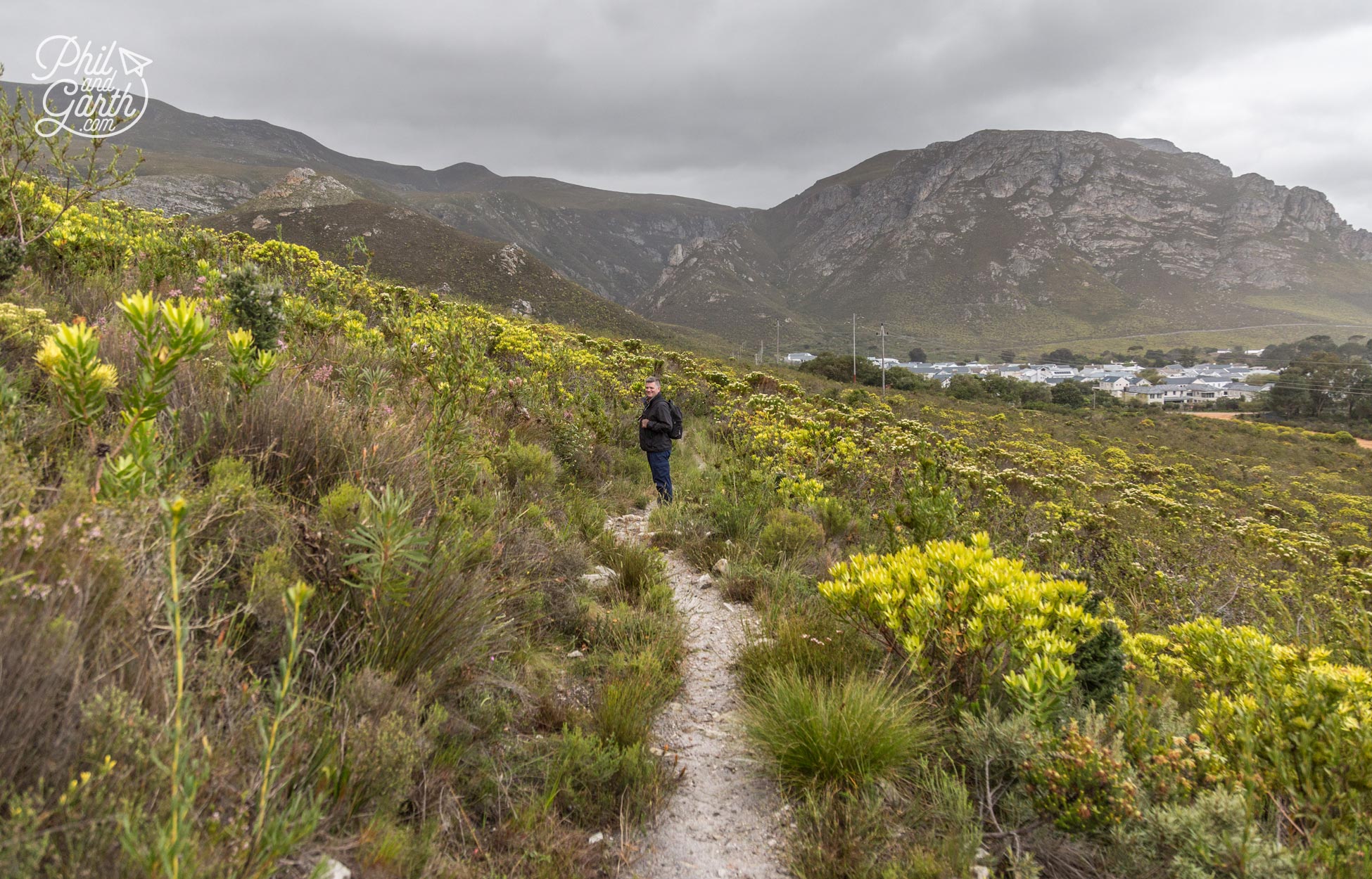 Phil on one of the walking trails of Fernkloof Nature Reserve 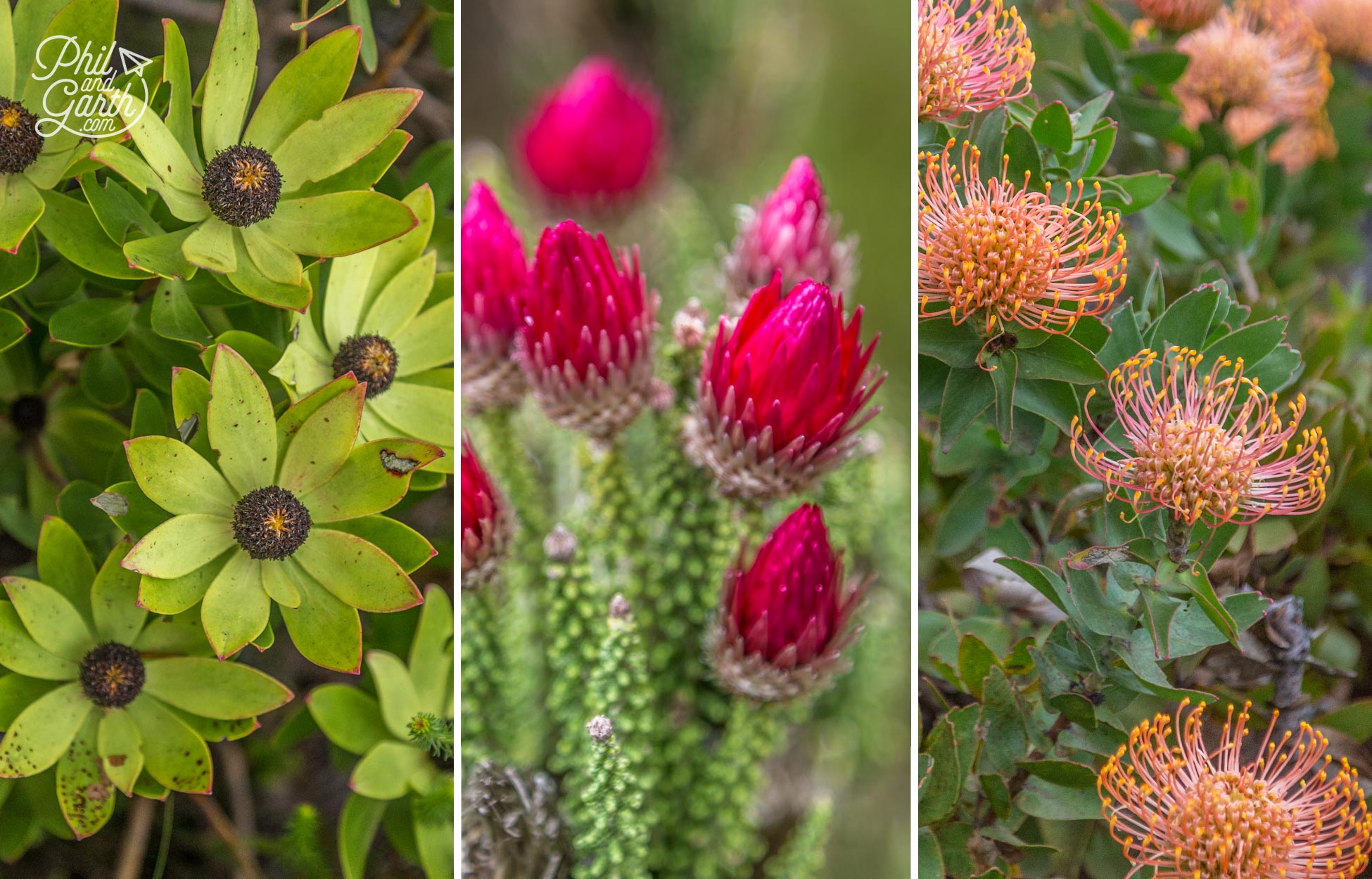 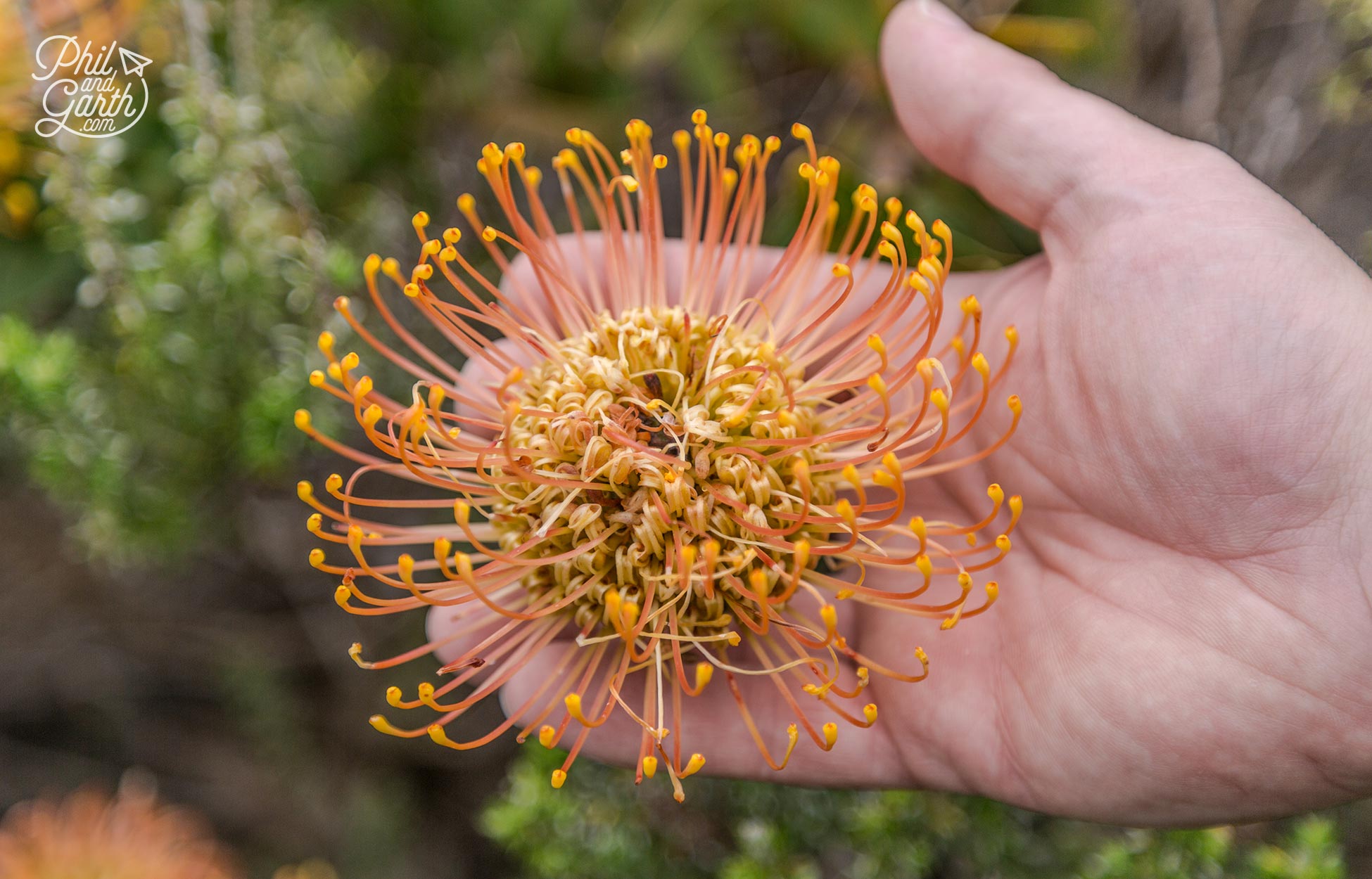 Our favourite was this one – the Pincushion Protea 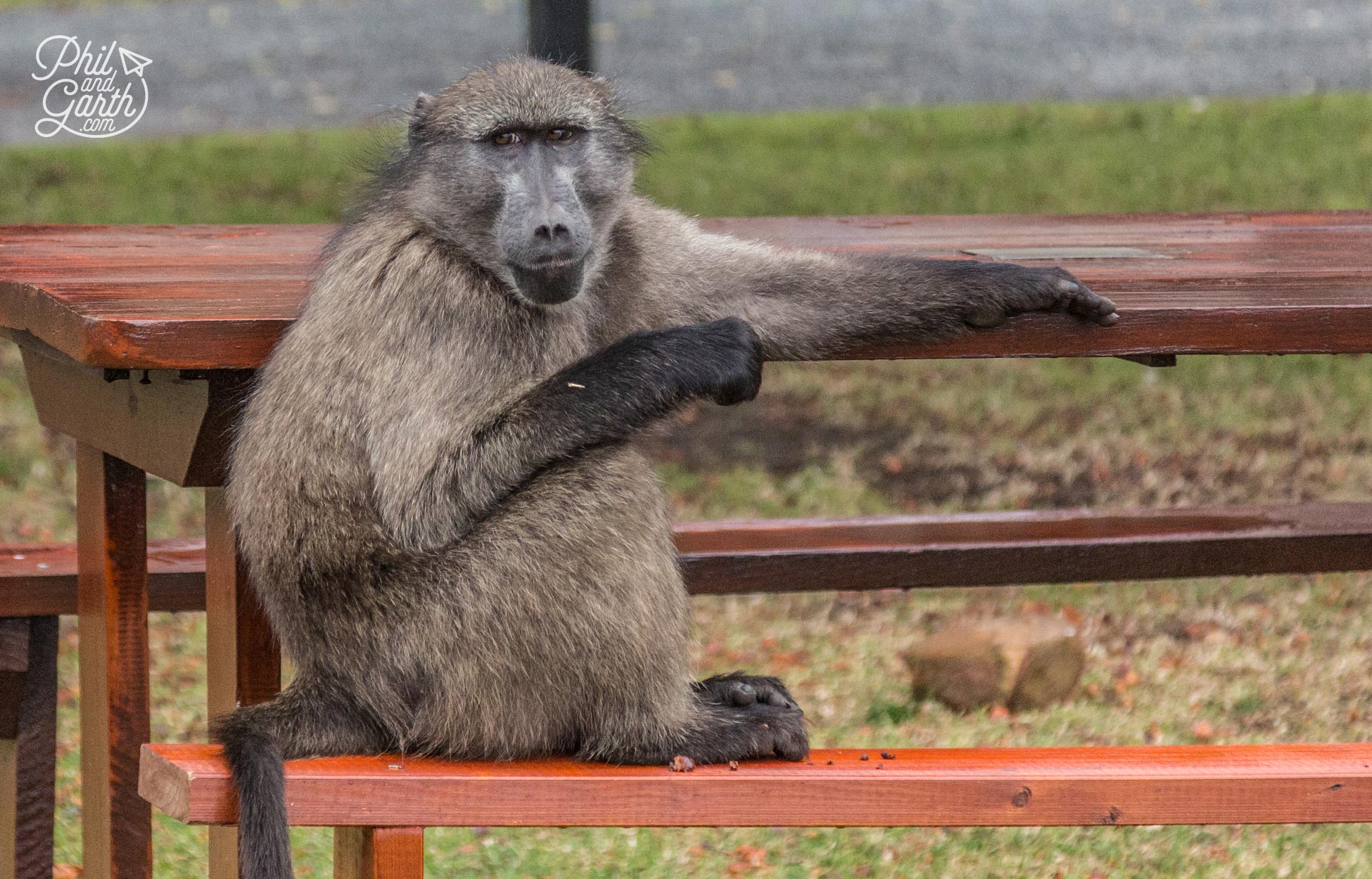 These baboons are so naughty, so watch out!

As we exited the car park these naughty baboons were so entertaining to watch stealing people’s food from cars! The rangers soon came out to see what all the commotion was all about, it was very funny!  It reminded us of watching the barbary macaques in Gibraltar doing exactly the same thing. 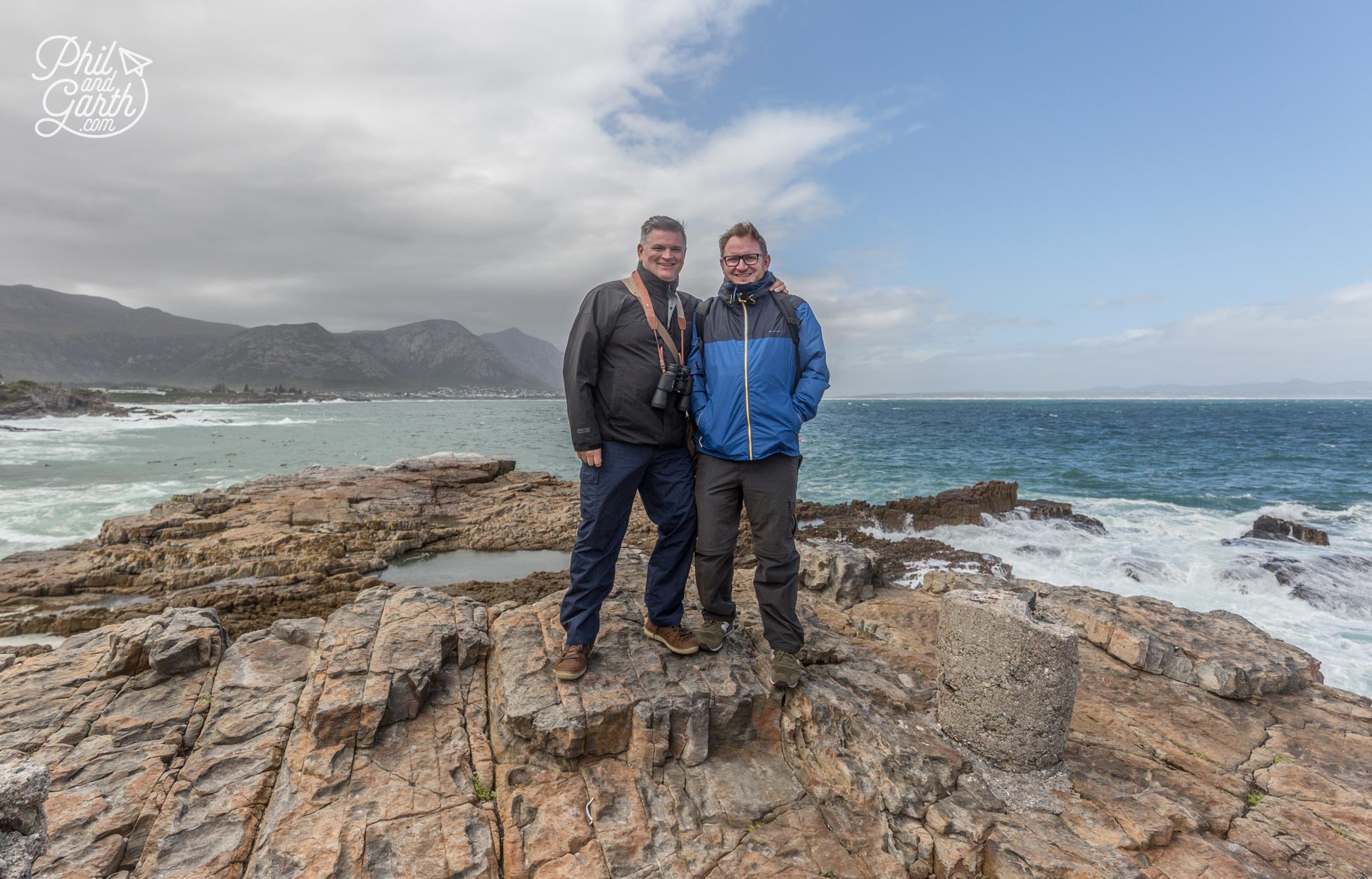 How we did it

When I lived in Australia for a year I went Humpback Whale Watching – it was awesome! They also carry out similair behaviours and we saw a whale breach over an over, I seriously thought it was just having fun (right Phil!), it also slapped it’s tail but I thought that was because it’s so big haha. So glad you had an amazing time, thanks for sharing your story. #feetdotravel

I went to Hermanus in 2010 and 2017. We made no great effort to see whales, but it wasn’t hard they were there! I was there for the 2010 Whale Festival – packed town and a great time had by all.
Hermanus does have some great restaurants, serving everything from pizza to superb seafood.
One that surprised us in 2017 was the Hermanus wine tour, ending in an excellent meal on an estate.
It’s definitely a great place to visit.

Whale watching is always so exciting! I last did that when in Alaska as a kid and am always so amazed by the sheer size of them! Would be lovely to do it again! #FeetDoTravel