Getting to the Boulders Penguin Colony near Cape Town

The final destination on our tour of South Africa was Cape Town. But before heading to the city we drove from Stellenbosch to see the Cape Peninsula and the Boulders Beach African penguins, just 50 minutes south of Cape Town.  On the way out of Stellenbosch we passed loads of strawberry fields. Apparently most of the produce is destined for our supermarkets in the UK and Europe. 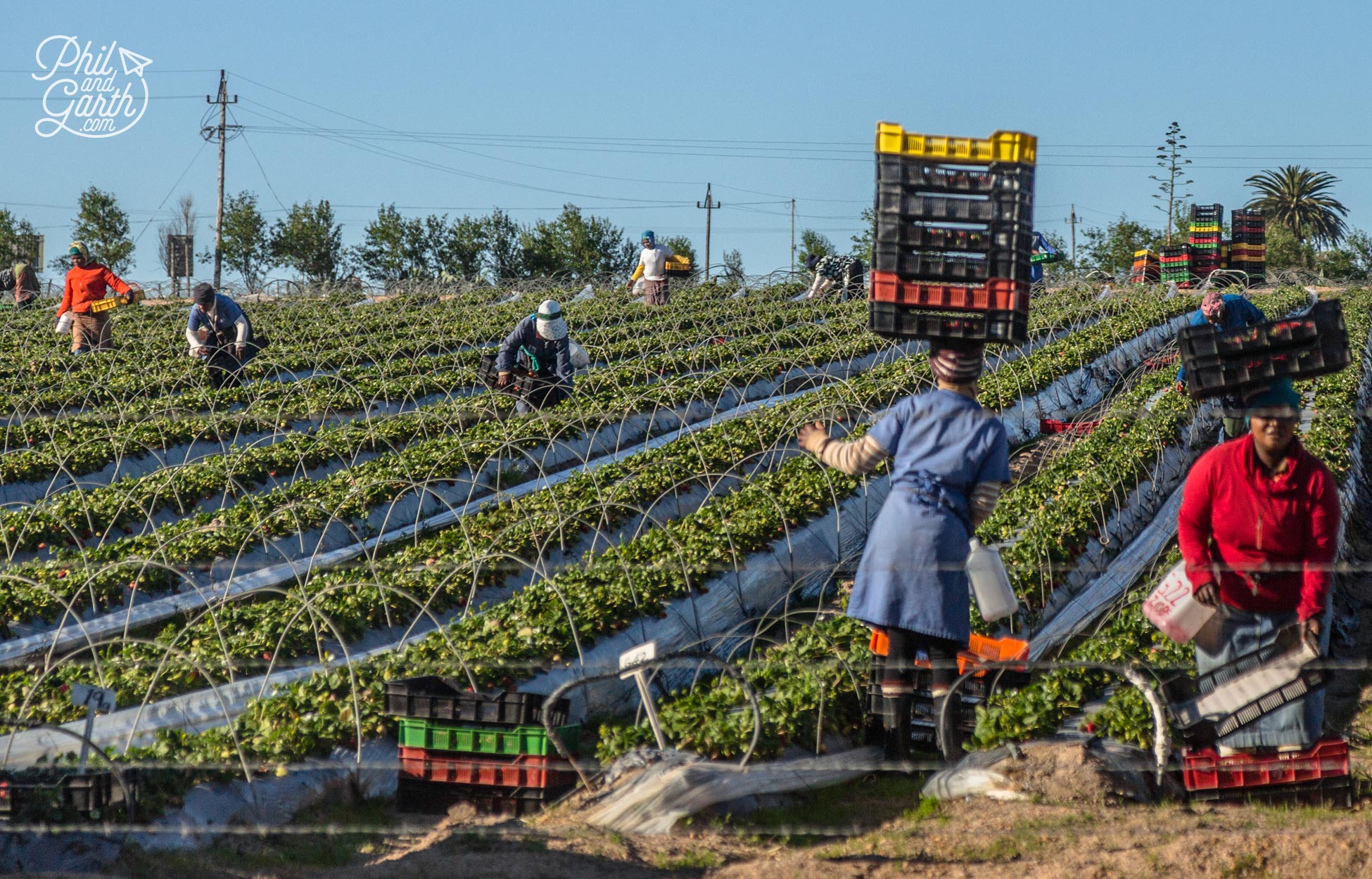 Cape Flats townships outside Cape Town, look at that layer of smog!

As we got closer to Cape Town we drove through the area called Cape Flats also called ‘The Flats’ it was quite a shock introduction to Cape Town. This is a colossal sized township is where approximately 2 million people live in terrible conditions. There’s hundreds upon hundreds of shacks as far as the eye can see, a really sad sight.

After driving through Simon’s Town (South Africa’s naval base) we arrived at the Boulders Penguin Colony at 9.20am. It was perfect as the place was nice and quiet, even the hawkers in the car park were only just setting up their stalls. 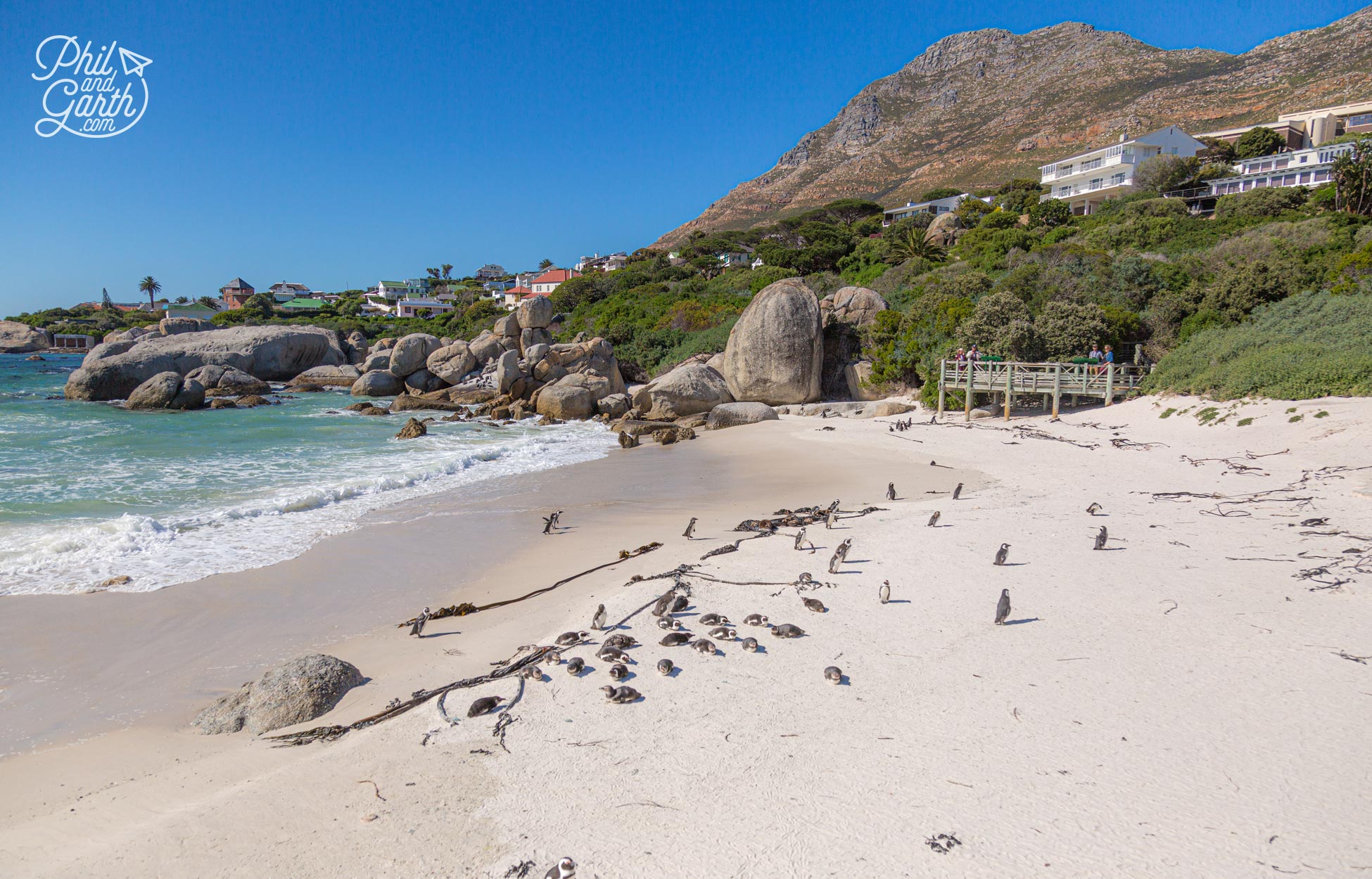 The Boulders Beach penguins are a colony of endangered African penguins and live on the rocks and the beach. The place gets its name from the huge and ancient granite boulders which protect the beaches from waves and the wind (they are over 540 million years old!) You pay a fee to enter this conservation area which is part of The Table Mountain National Park. The entrance fee helps with conservation work and gives you access to view the Boulders Beach penguins from 2 designated viewing platforms.

As we stepped onto the boardwalks that make their way through the sand dunes we immediately saw some penguins nesting in boxes. The park has introduced them to help penguins breed safely and keep their new born chicks safe from Kelp Gulls which steal their eggs and chicks. What’s great is that you can get very close to the penguins as some make their way along the dunes right next to the boardwalk. 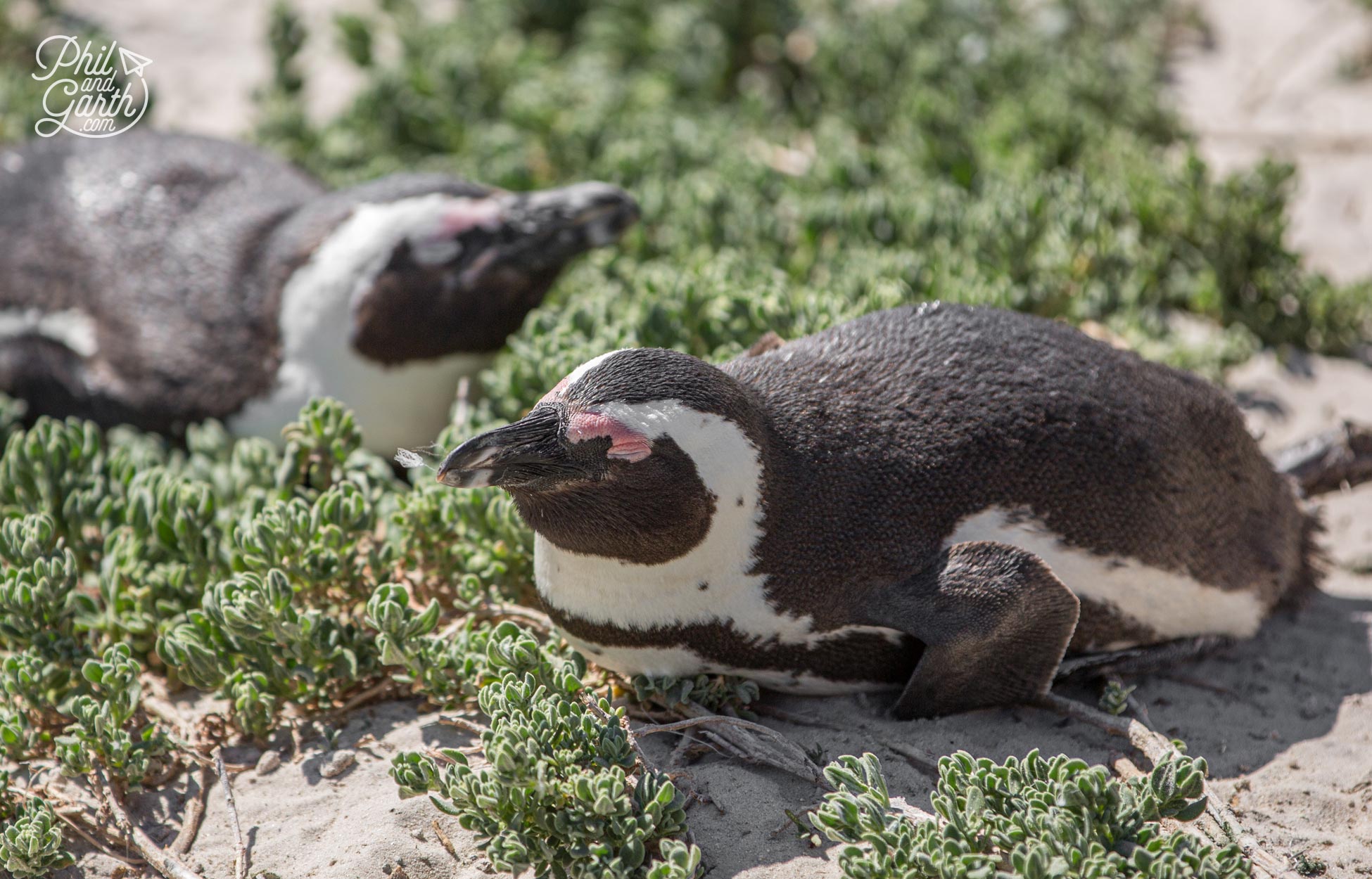 These little guys are just ace, it was just fantastic watching them basking in the sunshine and wandering freely in their natural environment. They are so cute! tapping their feet and waddling side to side. Our favourite part was watching them flop into the water for a swim. They shuffle to the edge of the water and belly flop down, really amusing when several of them did it together. 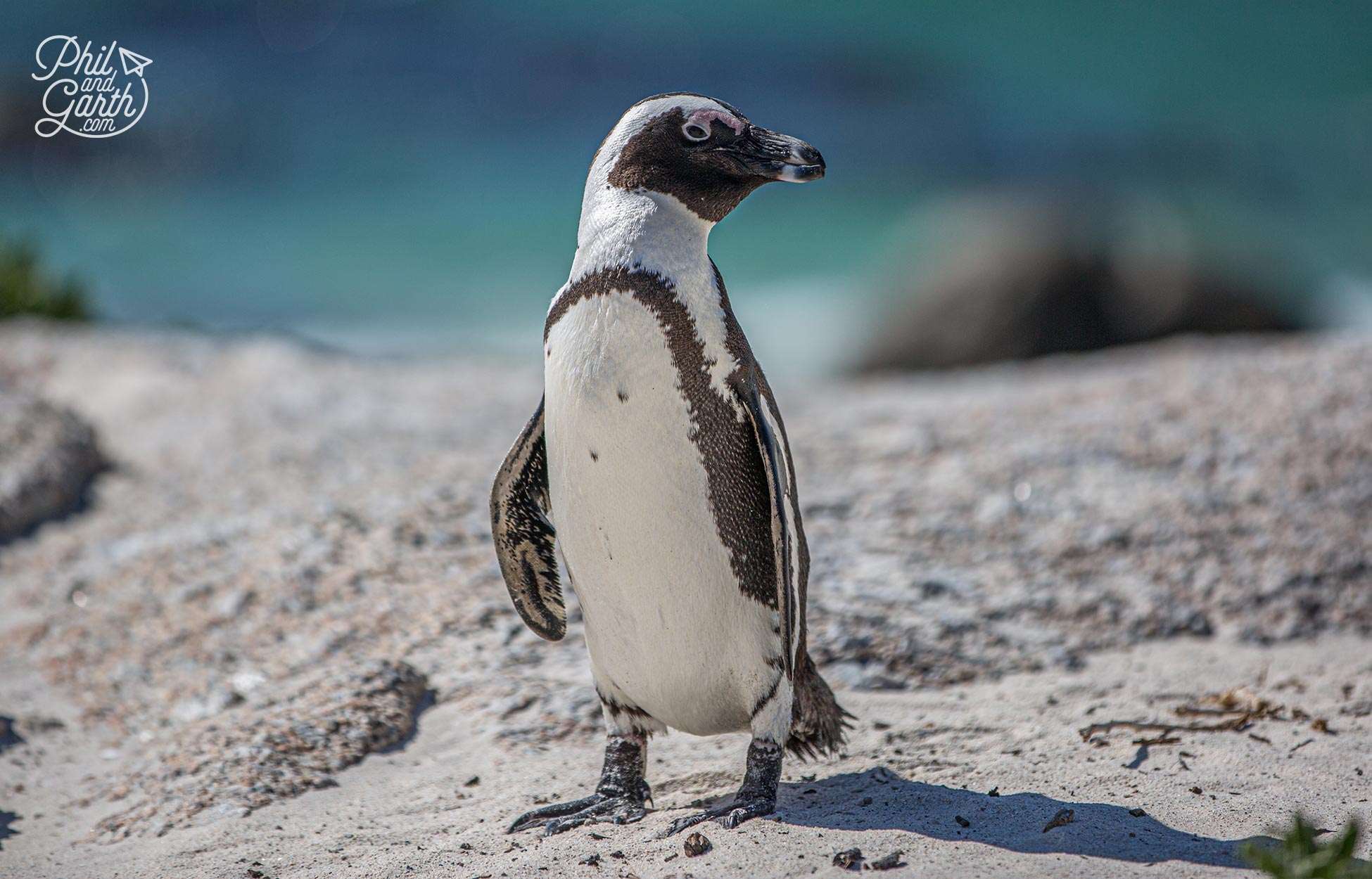 They are completely unphased by the visitors watching them African penguins are social breeders and nest together in colonies. Penguins moult annually – they are confined to land for 21 days until the old feathers are replaced.

Their distinctive black and white colours makes for vital camouflage. White for underwater predators looking up and black for predators looking down on the water. Sadly they are endangered, in 1910 there were 1.5 million African penguins, today it’s estimated there are only around 21,000 breeding pairs left. Thankfully the money from the tourists entrance fee is helping conserve the species. 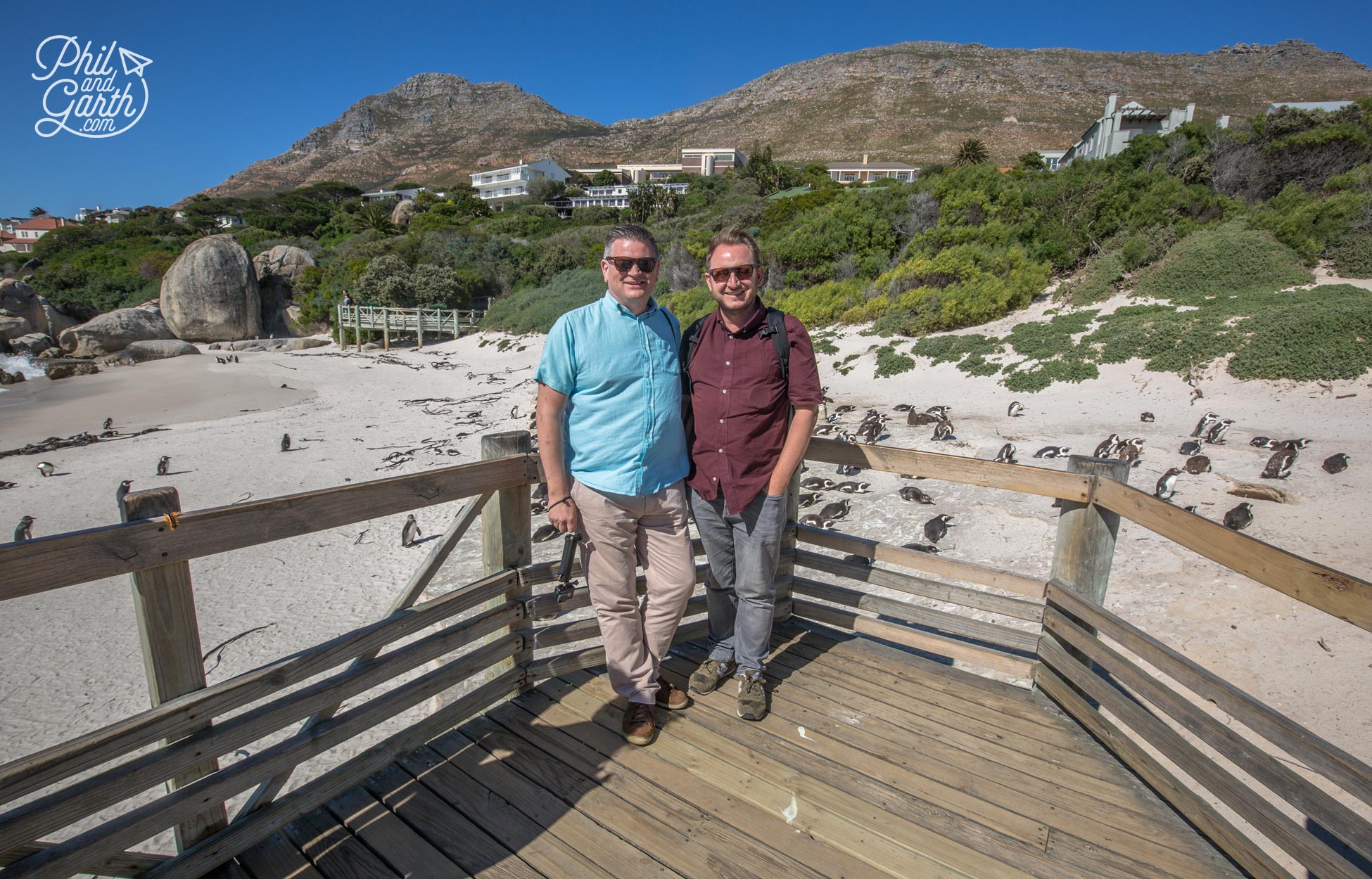 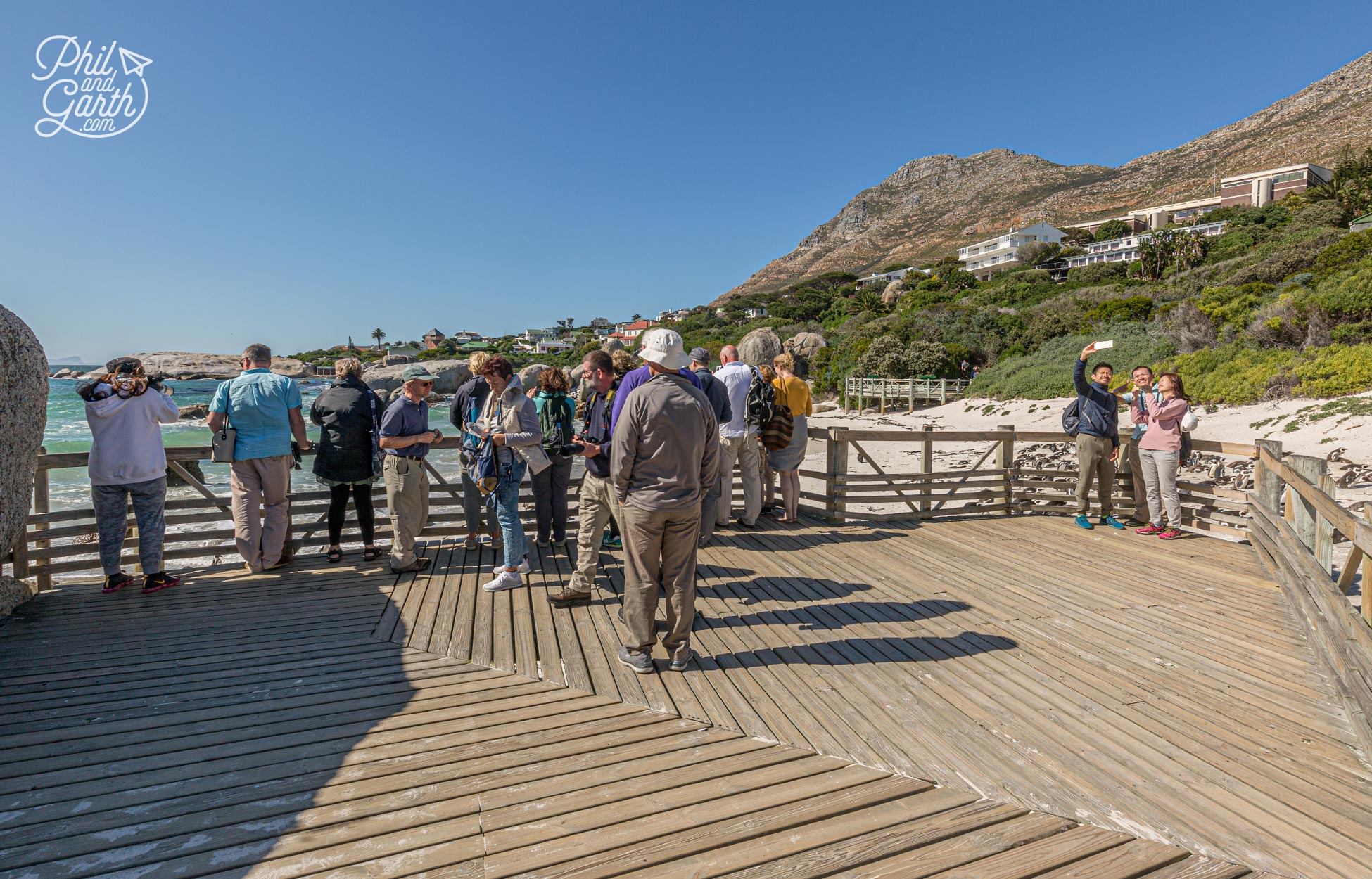 There are 2 beaches here – Foxy and Boulders. The 2 elevated viewing platforms overlook Foxy Beach, where you’ll see all the penguins together and even get within metres of them, but you are not allowed on this beach in order to protect the species. However you are allowed onto the public Boulders Beach a 10 minute walk from Foxy Beach which is accessed by a boardwalk called Willis Walk. Included with your ticket is the separate fee to enter Boulders Beach where you can go swimming. Just remember if you do end up sharing the beach with a penguin – don’t get too close as they have razor sharp beaks, they can also get stressed by human company. They are wild animals and will attack if they feel threatened. 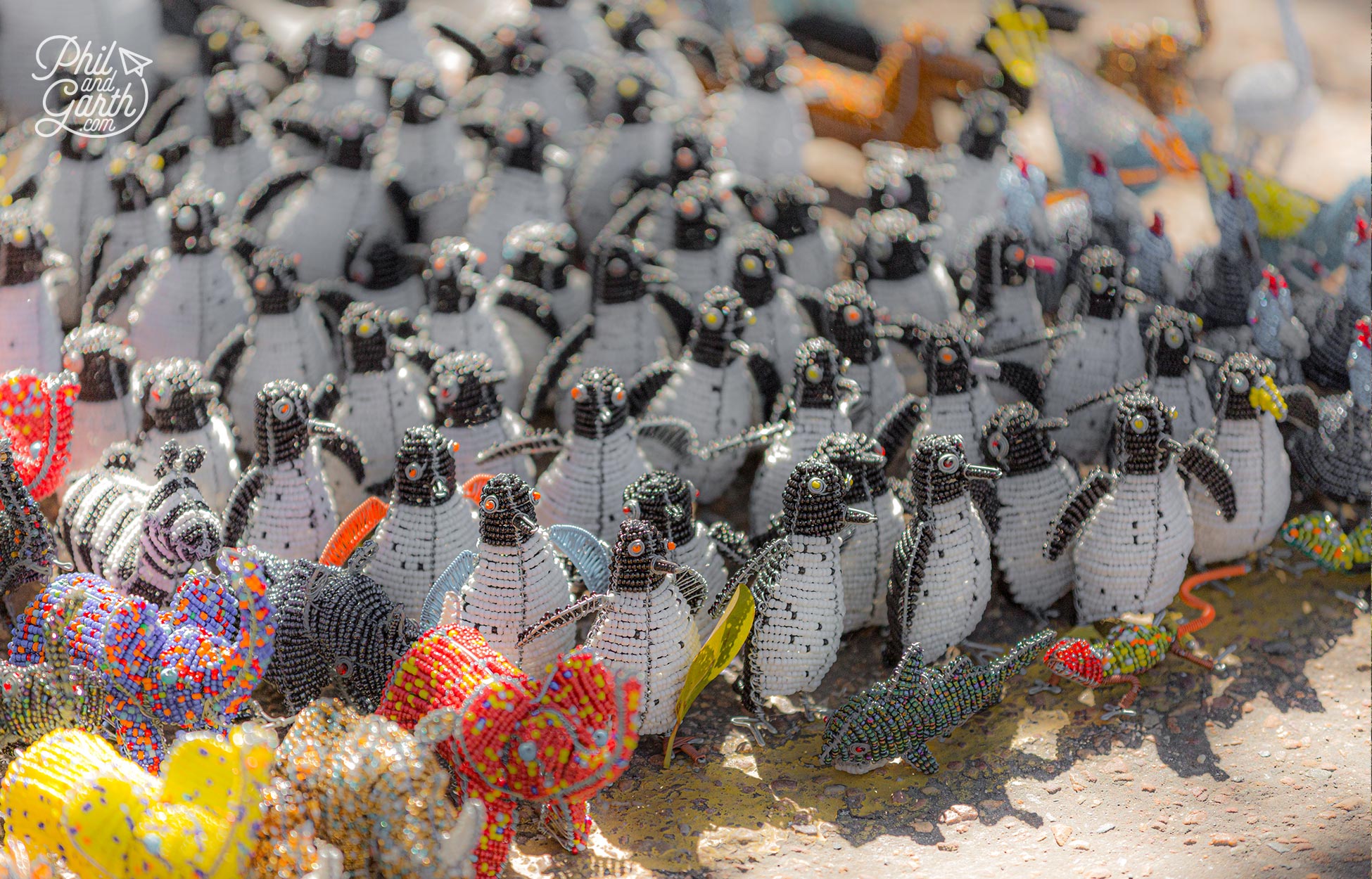 From Boulders Penguin Colony it took us about an hour to drive to the Cape Peninsula. This is a must do day trip if you are visiting Cape Town. There are 2 landmark attractions – Cape Point and The Cape of Good Hope both located in the Cape Point Nature Reserve a part of the Table Mountain National Park, so you have to pay a fee to enter the park (R147 adults / R76 children). Lots of wildlife at the Cape Point Nature Reserve

The Cape Point Nature Reserve has over 19,000 acres of land and 25 miles of coastline that makes up one of UNESCO’s Six Floral Kingdoms Of The World. There are over 1,100 species of indigenous plants called ‘fynbos’ and 250+ species of birds. If you’re lucky you might also see zebras, elands and various antelope. As we drove through the reserve we passed loads of baboons getting up to mischief and some ostriches.

The Cape of Good Hope

The Cape of Good Hope is Africa’s most south-western point. Named by the King of Portugal who said if captains can sail past this point they are have made it halfway from Europe to India and the Far East. Sadly numerous ships didn’t make it past this treacherous rocky obstacle course. 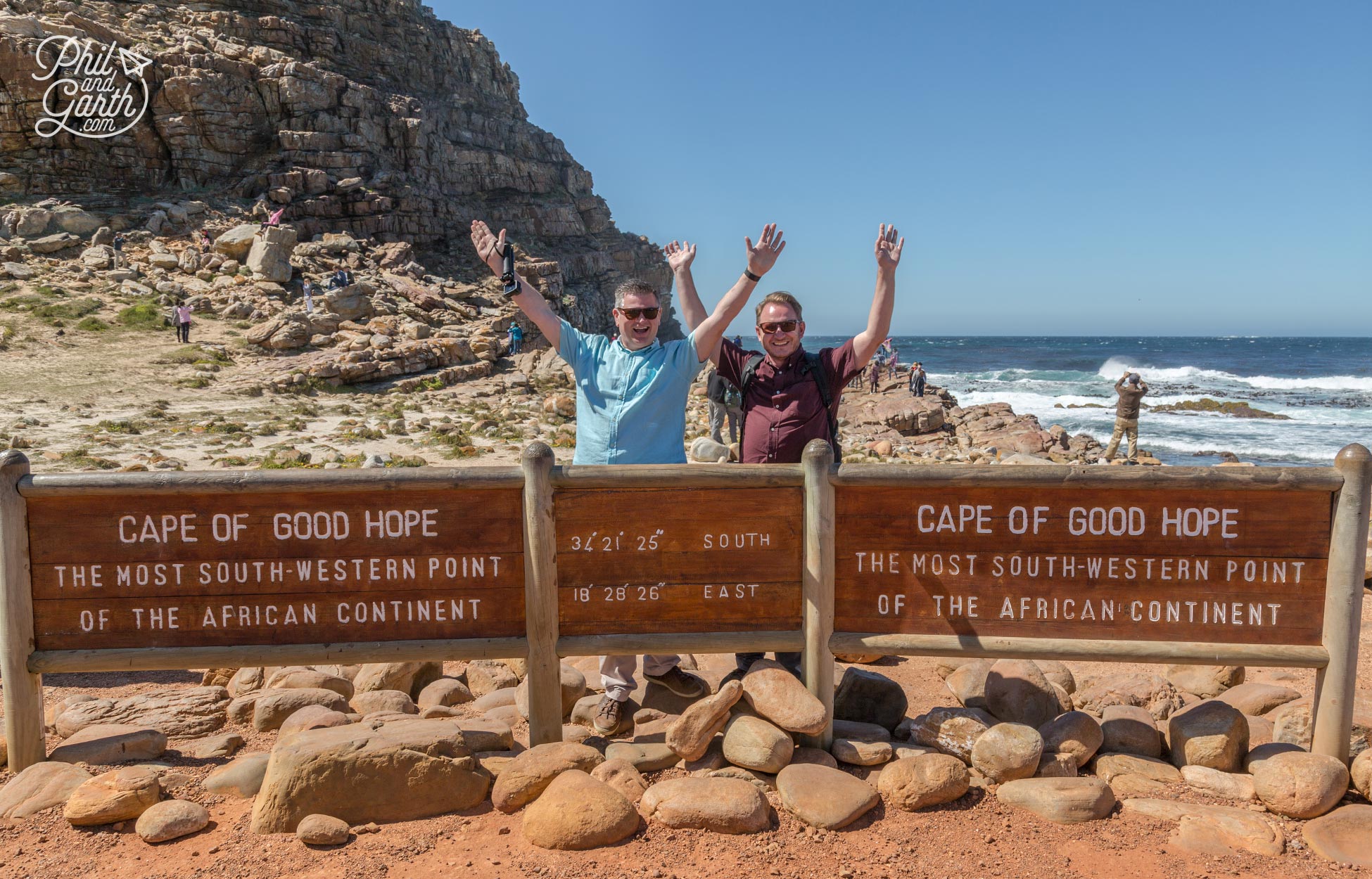 Phil and Garth at The Cape of Good Hope sign

We didn’t spend long here, just a bit of time scrambling over the rocks and laughing at those people trying to get the perfect selfie and that pensive looking out to sea Instagram photo! We just wanted the classic photo with the iconic sign, be prepared to wait your turn to take a photo though as it’s pretty busy. From here active types can take the 1 mile hike up to Cape Point, but be warned it’s a very steep hike to the top, too colossal for us so we drove! 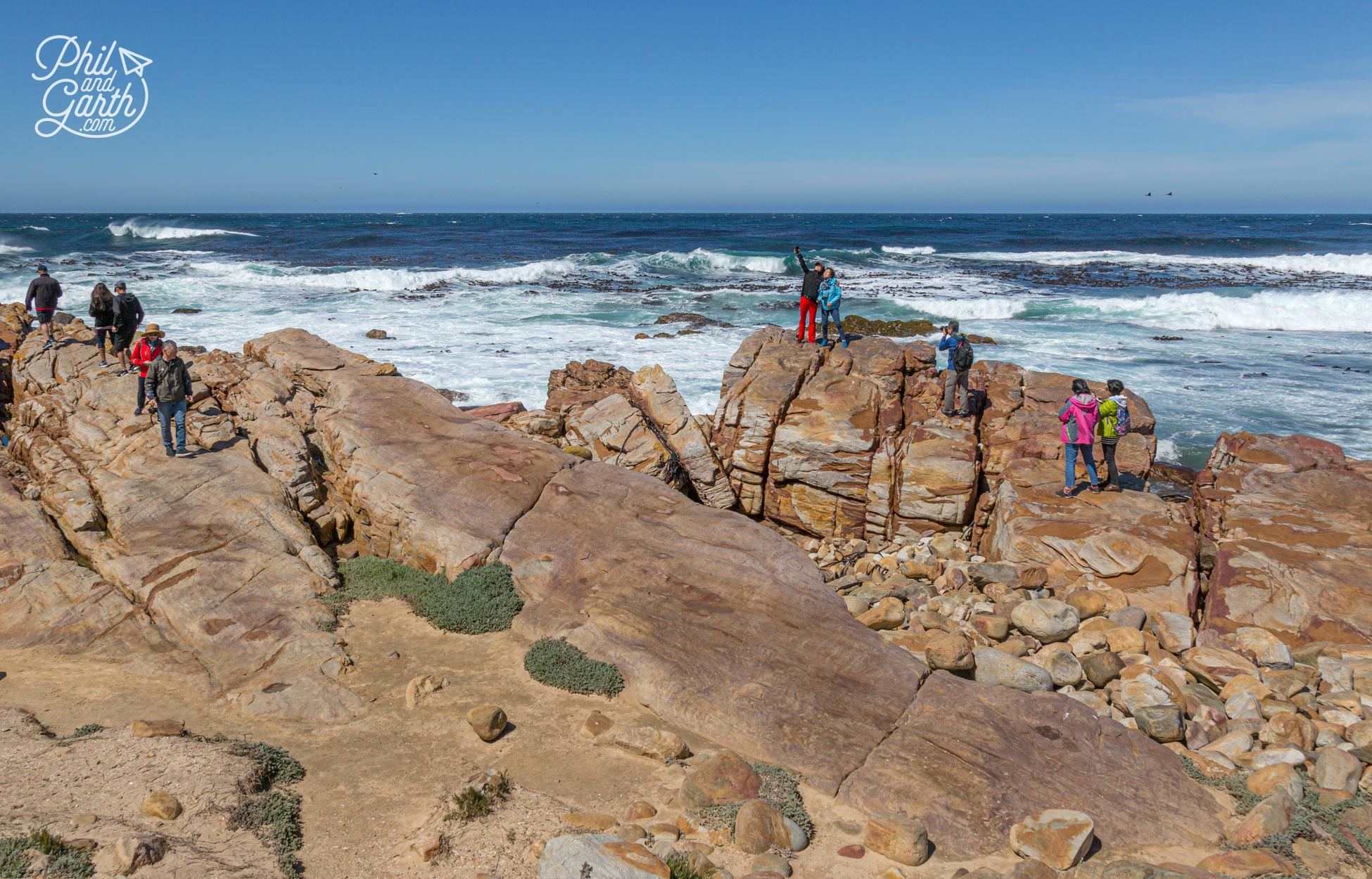 From the car park you can either walk up to the old lighthouse or take the ‘Flying Dutchman’ funicular like we did. It takes 3 minutes, for us it was a suprise atmospheric journey when all of a sudden a group of ladies started singing the ‘train song’ in a South African language. 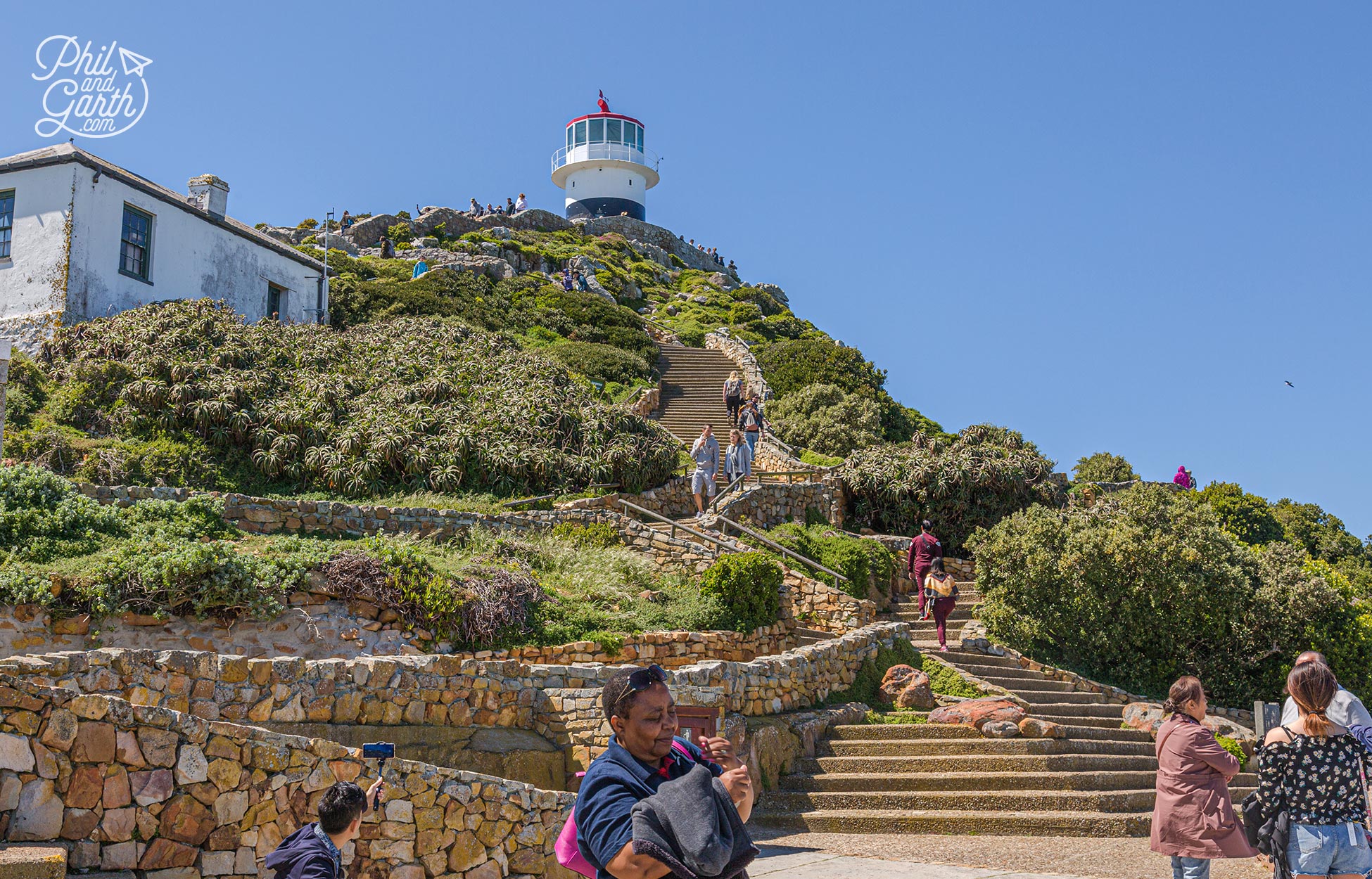 At the Cape Point lighthouse we felt like we were standing at end of the world where the Atlantic and Indian oceans meet, or so we thought! It’s actually a mythical meeting point of the Indian and Atlantic Oceans. The actual southern most tip of Africa is further south at Cape Agulhas.

The viewpoints are pretty spectacular over the vast expanse of ocean and looking down on the dramatic cliffs and across at the amazing scenery of this headland. 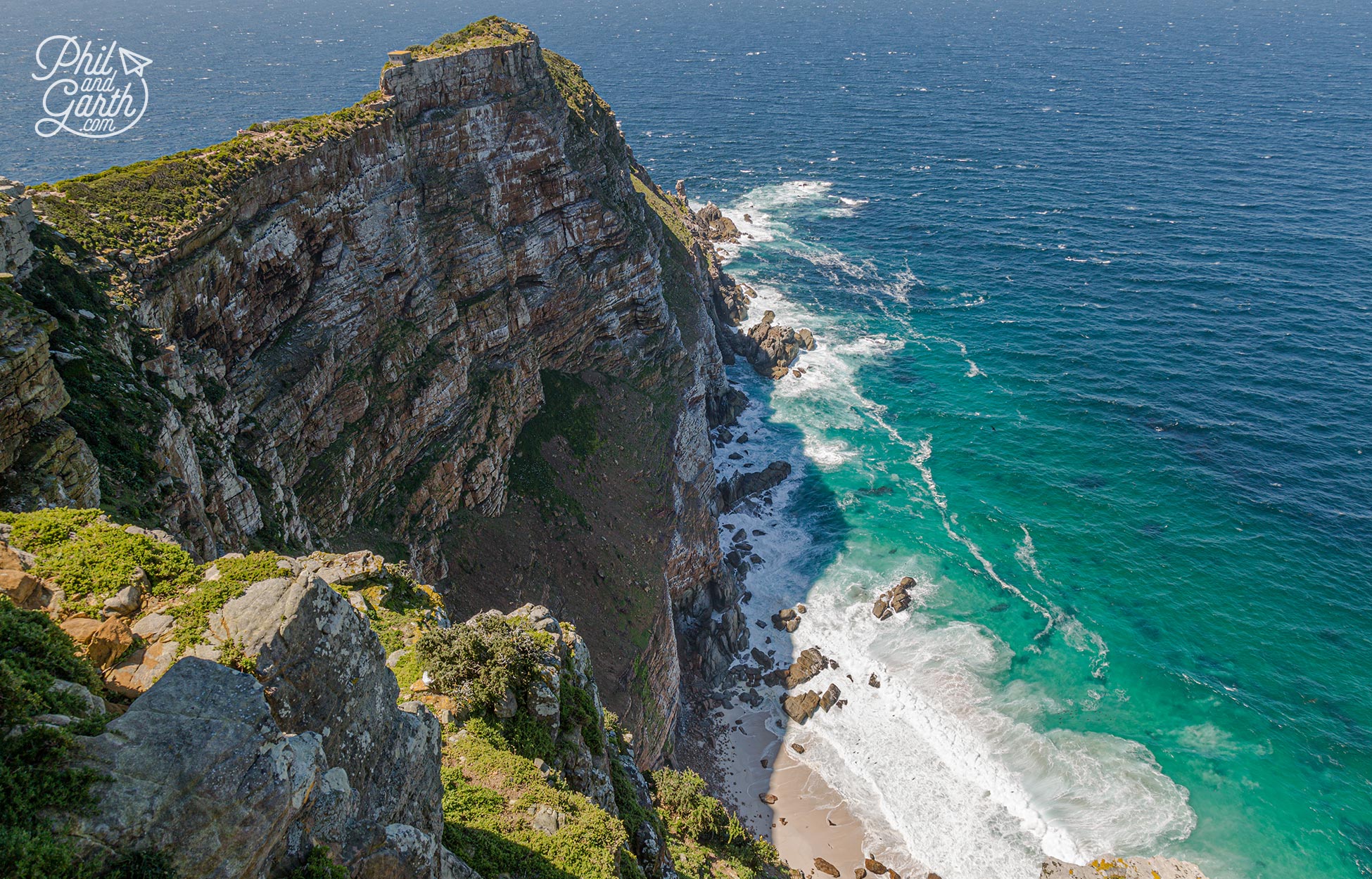 Looking down on the rugged beauty of Cape Point Epic views over Cape Point from the lighthouse

After taking the funicular back down we had lunch at their fast-food outdoor restaurant. Watch out for the baboons and birds grabbing your lunch if you sit at the tables outside. They know how to get food and prey on tourists!  so keep a safe distance as they can be dangerous. These naughty baboons reminded us of the macaques stealing food in Gibraltar.

We spent a few hours at the Cape Point Nature Reserve, but you could easily take a picnic and spend all day in the reserve with all the other natural attractions on offer.

As you drive back to Cape Town there’s some colourful beach huts you might want to stop to photograph at Muizenberg Beach. It’s a popular place in South Africa for photographers, Instagrammers and a paradise for surfers. Just some of the colourful Victorian beach huts at Muizenberg Beach Muizenberg has a huge white sandy beach which is popular with surfers and families.  This is also the best place in South Africa to learn how to surf with an array of surf schools on offer. Or simply grab some fish and chips and watch surfers ride the waves. How we did it

I always love your videos but this one was especially delightful! Sounds like it was an amazing trip! The penguins are gorgeous and the views quite incredible! #feetdotravel

Those penguins are gorgeous! Great post full of excellent information and exceptional photos. I have pinned… I hope to get there one day.

Such a lovely beach! Would love to see the penguins up close in their natural habitat! Though it’s a shame that their endangered! #FeetDoTravel