TRAVEL INSPIRATION
15 UNESCO World Heritage Sites You Should Visit
12 Best Countries To Visit In 2017
20 Ways to Collect and Display Souvenirs
Phil and Garth > Destinations > Europe > UK > England > Medieval Chester: The Sights and Things to do in a day

Medieval Chester: The Sights and Things to do in a day 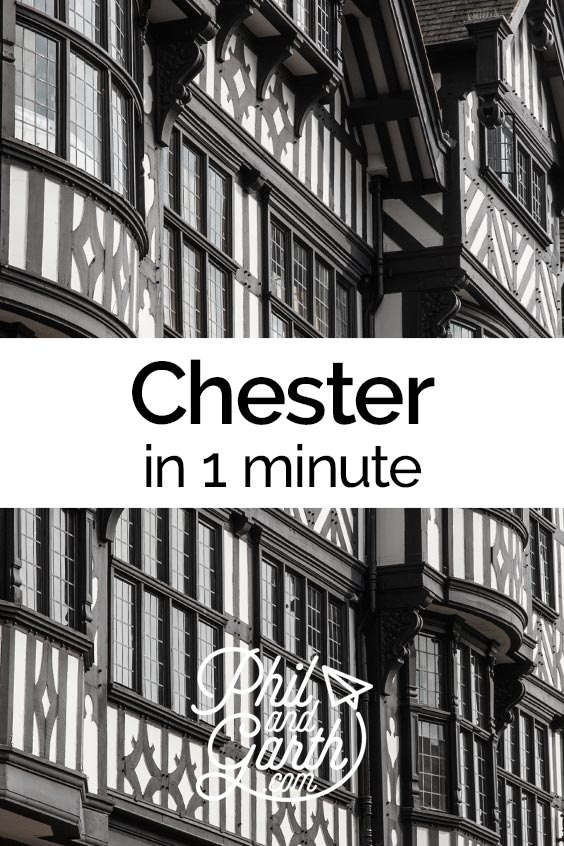 Chester is a charming medieval city in the North of England. Founded by the Romans they built a fort called Deva in 79AD, to protect the land from marauding Welsh and English tribes. But it’s as a medieval city Chester is best known, full of lovely Tudor black and white half timbered buildings. It also has Britain’s best preserved city wall, other British cities have torn theirs down for expansion. Located on the River Dee, Chester used to be an important trading town during the medieval period when the town flourished, but by the end of the 15th century the River Dee silted up, and the Port of Chester went into decline, benefiting nearby Liverpool.

Chester is perfect for a day or two of sightseeing and shopping as we did, it’s compact, stylish and as a friend of ours said – rather trendy!

Chester City Wall with water tower in the distance

Chester’s City Walls were first built by the Romans in 79 AD originally in wood and later rebuilt in stone. After the Romans abandoned the city in the 5th century the Saxons strengthened the wall during the 10th century (the medieval period). By the 1500s the wall had watchtowers, but during the Civil War it took a battering from cannon balls which destroyed portions. The wall was repaired in the 18th century and changed to a walkway for the Victorians to stroll which is exactly how they are today.  We walked the 2 mile stretch of the distinct rose coloured sandstone walls which circle the city.

To access the wall we climbed the steps at The Eastgate Arch. There are steps at all four of the original gateways into the city, today the gates have long gone, and since replaced with arches. As for the other three gates, ‘Northgate’ is a Georgian arch which replaced the original Roman gateway in 1810. ‘Newgate’ was rebuilt in 1937, and ‘Wolfgate’ dates back to the 12th century.

You can’t miss Chester’s iconic clock here – The Eastgate Clock. We liked the ornate ironwork, very fancy, it was made for Queen Victoria’s Diamond Jubilee in 1897, and is considered by Chester to be the 2nd most photographed clock in England after Big Ben in London, really?! we didn’t know that. It was also a good place to people watch below.

The city wall as seen from The Roman Gardens

Garth on the wall near the River Dee

Our leisurely stroll along the length of the wall took us about 50 minutes. We picked up a free walking guide from the tourist information office beforehand, but didn’t really need it as there were lots of handy plaques along the way to explain different parts you’re looking at.

We passed Chester Racecourse, Britain’s oldest racecourse where horse racing started back in 1539. Racing events are really popular with groups of young people who get really dressed up, like a school prom, it’s a big day out.

We also watched people manoeuvring their canal boats along the stretch of the canal that runs alongside the wall.  There was also another spot on the wall with a view across to the Welsh mountains in the distance.

Look out for the Grosvenor family’s symbol in brick patterns. These diamond shapes signify the building belongs to the Grosvenor Estate owned by The Duke of Wellington.  The wealthy family own huge amounts of property across Cheshire, Oxford and London’s Mayfair and Belgravia.

Looking like something straight from a Harry Potter movie are the Tudor buildings on the 4 main shopping streets of Chester – Northgate, Eastgate, Bridge and Watergate Street. They lead out from the Market Lantern Cross, which was once the focal point of the city. All 4 streets are lined with ‘The Rows’ and are unique to Chester, and the world! These Tudor style double decker buildings are really handsome and date back to the 13th century and are also called ‘galleries’ – basically two storied shopping arcades.

The shops are typical of any other high street, but Watergate and Lower Bridge Street seemed to have more independent shops. If you like nice department stores try Browns of Chester (Debenhams) which has been there for years.

Phil striking a pose on The Rows

We thought the Rows were the perfect example of a medieval shopping mall!

On Bridge Street look for ‘Three Old Arches’ it’s the oldest section of The Rows and original from the 13th century. It’s also considered to be the oldest shopfront in Britain.

But surprisingly many of the Tudor buildings you see could be described as mock Tudor. The Victorian’s brought wealth to Chester with the industrial revolution and they restored buildings to their former glory, how’s that for early restoration!  Either way buildings stand as splendid examples of both Tudor and Victorian architecture.

The black and white colour palette is everywhere!

Have an English afternoon tea

Have a cream tea, or afternoon tea like we did at Mad Hatters a lovely tearoom and bakery. Mmm, it was fab! Look out for the quirky doorstop on the way out!

A real Roman Hypocaust in the basement of Spud-u-Like

You can poke your head right inside this Roman hypocaust

This is our bizarre tip – Get a free view of a perfectly preserved Roman hypocaust in situ. It was an original form of underfloor heating and it’s in the basement of Spud-u-Like on Bridge Street, we cheekily wandered down their steps without eating there, but nobody seemed to mind.

Off Newgate, just outside the wall are the remains of a Roman amphitheatre, built in 86AD. Up to 7,000 people would have been spectators here. It was discovered in 1929, and is the largest ever found in Britain. Only part of it has been excavated so there’s not really much to see, so we used our imagination of gladiators having fights in the arena. However we did see a Roman Centurion!  …well some guy in a costume giving a history lesson to kids.

Just over the road opposite the Amphitheatre were some Roman relics laid out in a small garden. It also houses a reconstructed ‘hypocaust’ using pieces found (the one in Spud-u-like was much better)

Illustration of the breach in the City Wall

There’s a clever illustration in these gardens of what the breach in the City Wall might have looked like in 1645 during The Civil War.

We walked through the Roman Gardens and went through a rusty looking corridor through the City Wall at the end, which opened out onto a road with ‘The Nine Houses‘. Just look at the front doors, they’re like little hobbit houses, infact they were Almshouses built for poor elderly people in the 17th century. today there are only 6 of the 9 left. We’ve come across Almshouses a few times now in other medieval cities we’ve visited across the UK.

If you walk the wall circuit you’ll come across Chester Castle, built in 1070. It looked quite modest in size compared to other castles in Britain.  We only saw it from the vantage point on the wall, so we’re pretty sure there was probably more to it than what we saw.

The exterior and gardens of Chester Cathedral

Chester’s gothic style Cathedral is quite something. Construction began in the 10th century as an abbey church, and was modified over centuries. In 1540 it became Chester Cathedral. Unusually this cathedral had a free standing bell tower in the grounds.

The magnificent interior of Chester Cathedral

Inside is monumental! we love gothic architecture, the work that must have gone into this place with all the intricate carving is just incredible. So sit down, admire and appreciate the creative work of our ancestors. It took an incredible 275 years to build! The stained glass looked great too with the sunlight streaming through. Even if you’re not religious it’s worth visiting for the sheer beauty. Phil pointed out to Garth the unique courtroom inside. We didn’t take the tour, just had a look around ourselves.

The Bear and Billet pub

We found Chester’s oldest oak timber-framed building built in 1661. It’s now a pub, The Bear & Billet, and was once used as a toll gate into the city. It looked old and wobbly! really striking with its classic black and white Tudor styling, ye olde England at its best. Phil liked the cute little leaded glass windows, we learnt they had small windows because large panes of glass could not be produced in those days, and incase you were wondering about those colours, well the timber was painted in black tar and the white was lime wash.

Ye Olde Boot Inn is another, it’s also from the 17th century and still has it’s some of the original medieval seating. Both pubs are not modern day gastro-pubs, instead old fashioned, no-frills British boozers, so if you want to join the regulars, then head to either of these places.

The Old Dee Bridge once had a drawbridge and towers

After taking in the city’s history and sights we headed down to the tranquil River Dee past the historic Old Dee bridge and on to The Groves – a delightful promenade beside the river for a walk.

Perfect place to relax on a summer’s day

We were tempted to have a go on the pedal rowing boats, but decided to keep walking and get ice-cream.  It was a lovely area especially on the summer day we had.  There were also short pleasure boat trips on offer here too.

The Queens Park suspension bridge had great views over the River Dee, a really picturesque spot and a great place for just watching the world go by like the swans and ducks. Over the bridge is The Meadows, a large park where families were having picnics.

Items from the past

We found an early Victorian postbox just outside the the Town Hall, you don’t see many of these early hexagonal pillar boxes, so Phil figured it was worth a photo opportunity!  Here’s a fact for your next pub quiz – Is it considered ‘an act of treason’ to place a stamp with the Queen’s head upside down on and envelope? … well a few years ago The Royal Mail finally gave an answer to an old English law, they said it’s not an offence, so there you go!

There’s also plenty of old Victorian signs around the city, look up and you’ll see examples etched or painted onto buildings. Garth is always on the lookout for these! If you’re into typography then you’ll understand why.

So that’s our guide to Chester, if you want a day trip full of old world English charm, then Chester is ideal because of its compact size, you can squeeze a lot into a day.

Phil and Garth at the famous Eastgate Clock

Lovely photos of Chester where I haven’t yet been. but am now dying to. Thanks. 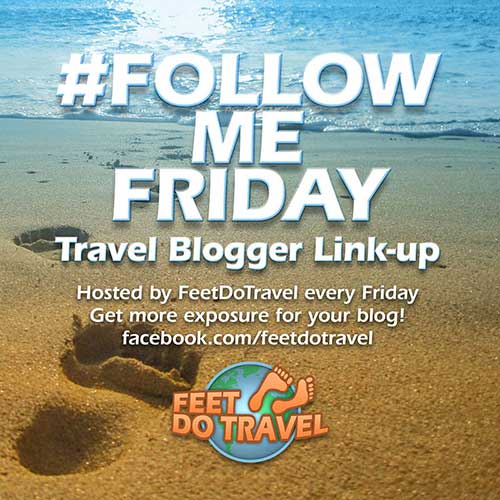 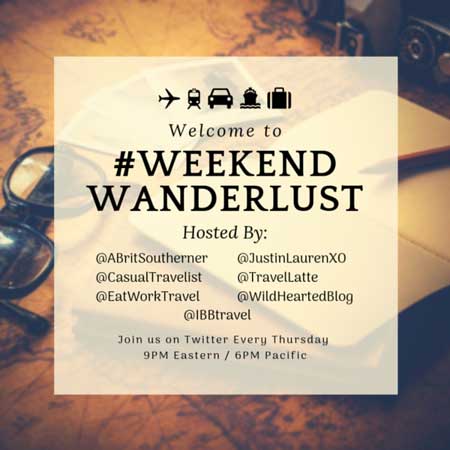