When we previously visited Oban in the autumn on our Scottish Highlands road trip, a nice chap called Donald who works at the ferry terminal persuaded us to return in the summer to visit the Treshnish Isles to see the large puffin colony and Fingal’s Cave, so we did just that as the opportunity to especially see puffins close-up was too irresistible!

Part of the Inner Hebrides, the Treshnish Isles is an archipelago of small uninhabited islands that are rich with wildlife communities. They were designated a site of Special Scientific Interest in 1973 because of their unique geomorphology (scientific study of landforms) and have a special protection for the Conservation of Wild Birds. Once ruled by the Vikings, the islands have many ancient remains of forts and the Viking heritage is still reflected in the names of the islands. We took a day trip to Lunga, the largest island to see the puffins and also to the Isle of Staffa to see the legendary Fingal’s Cave.

Our day trip started with a ferry from Oban to Craignure on the Isle of Mull which takes about an hour. Once disembarked we were collected by our tour company and transferred by minibus to the small town of Ulva, where we caught our sightseeing boat from. From Ulva it takes another hour to reach Staffa. 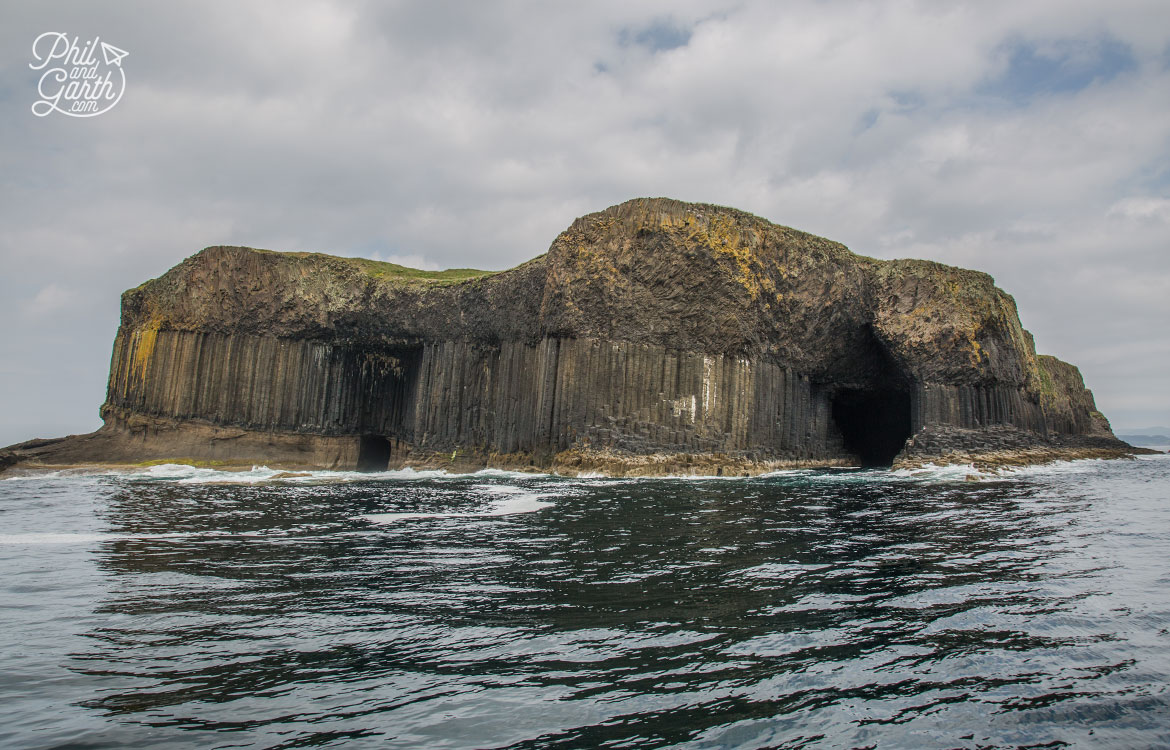 The otherworldly looking Isle of Staffa

Staffa is one of the natural wonders of the world, it means ‘Pillar island’ in Old Norse. Staffa looks incredible, gigantic hexagonal basalt pillars cover the sides of island, it’s a unique natural phenomenon and very similar in appearance to the Giant’s Causeway in Northern Ireland. Legend has it the Irish giant, Fionn MacCumhaill (Fingal) built the causeway so he could walk from Ireland to Scotland and fight his Scottish counterpart Benandonner.

As we stepped onto the hexagonal rocks we were struck by how wild and remote this place is, the beauty is in the patterns everywhere you turn. The whole place looks bizarre, the columns look like giant pencils soaring out of the sea, it reminded us of the basalt columns we saw on Reynisfjara beach in South Iceland. 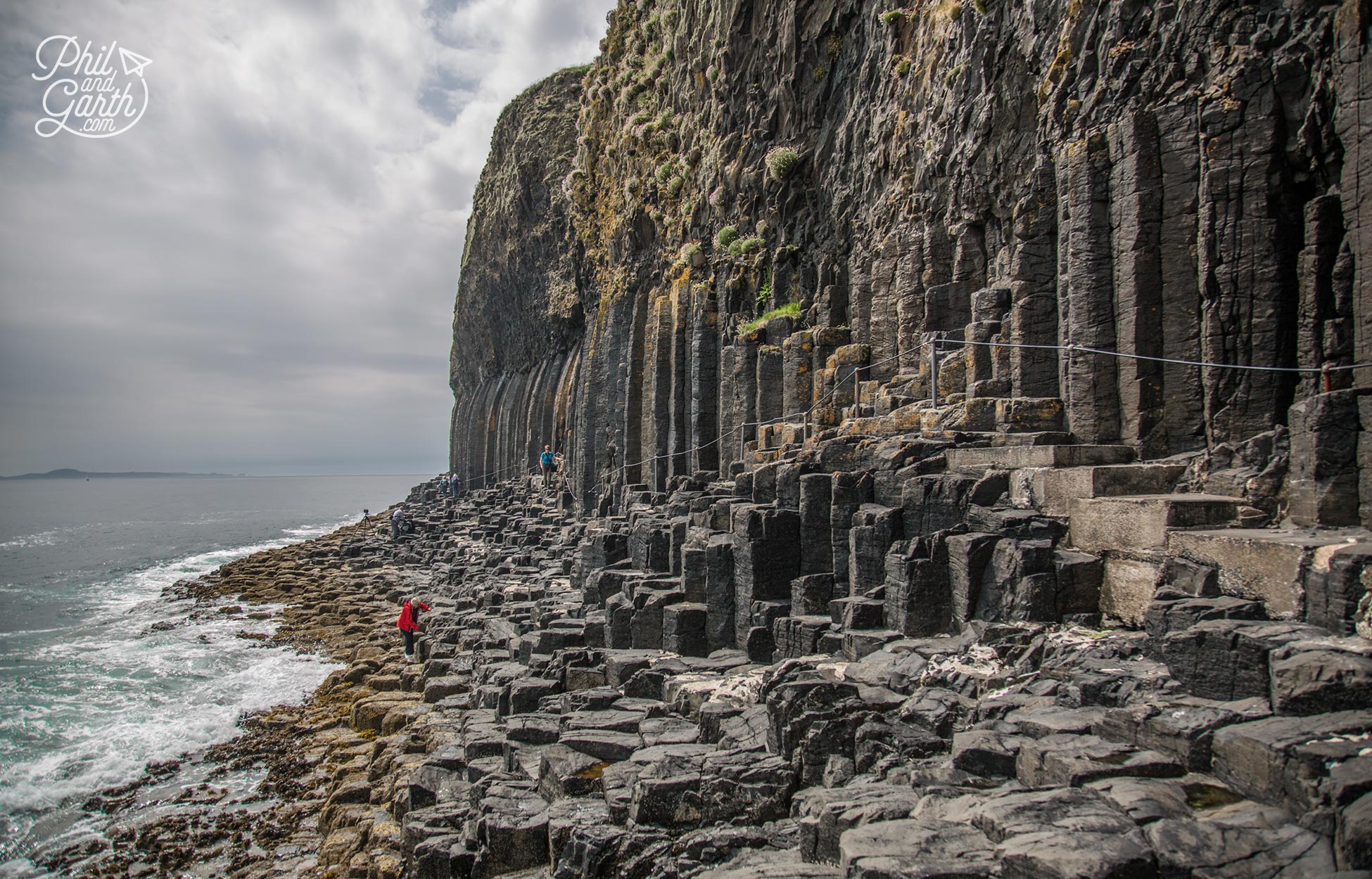 The rugged beauty of the Isle of Staffa Staffa is made entirely of volcanic rock created as part of a volcanic eruption 59 million years ago! (I know, mind blowing!) As the molten lava cooled, contracted and solidified it created equally spaced hexagonal columns. The striking hexagonal columns on the Isle of Staffa Subtle colours in the basalt columns 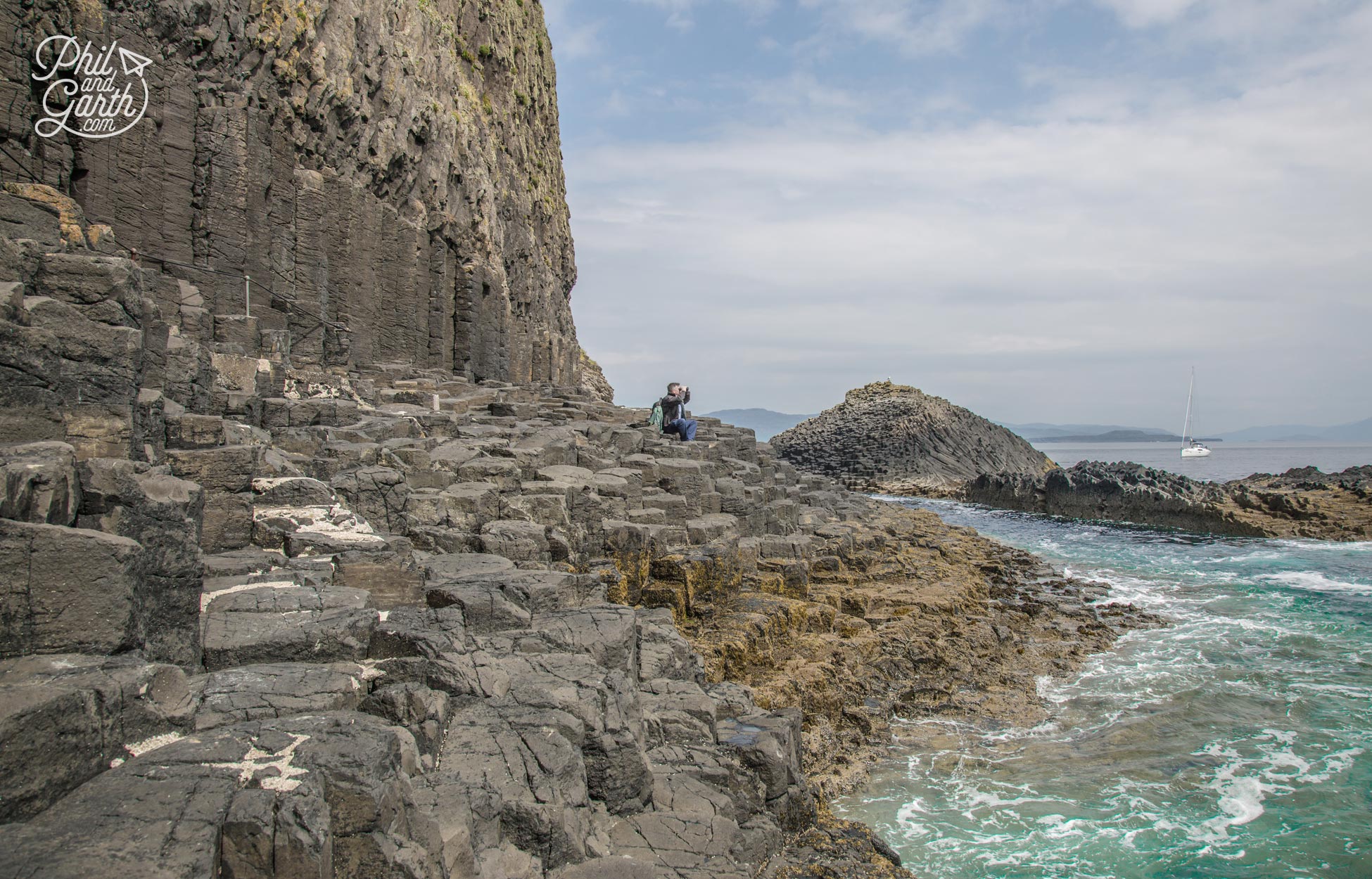 Phil viewing the local wildlife through his binoculars 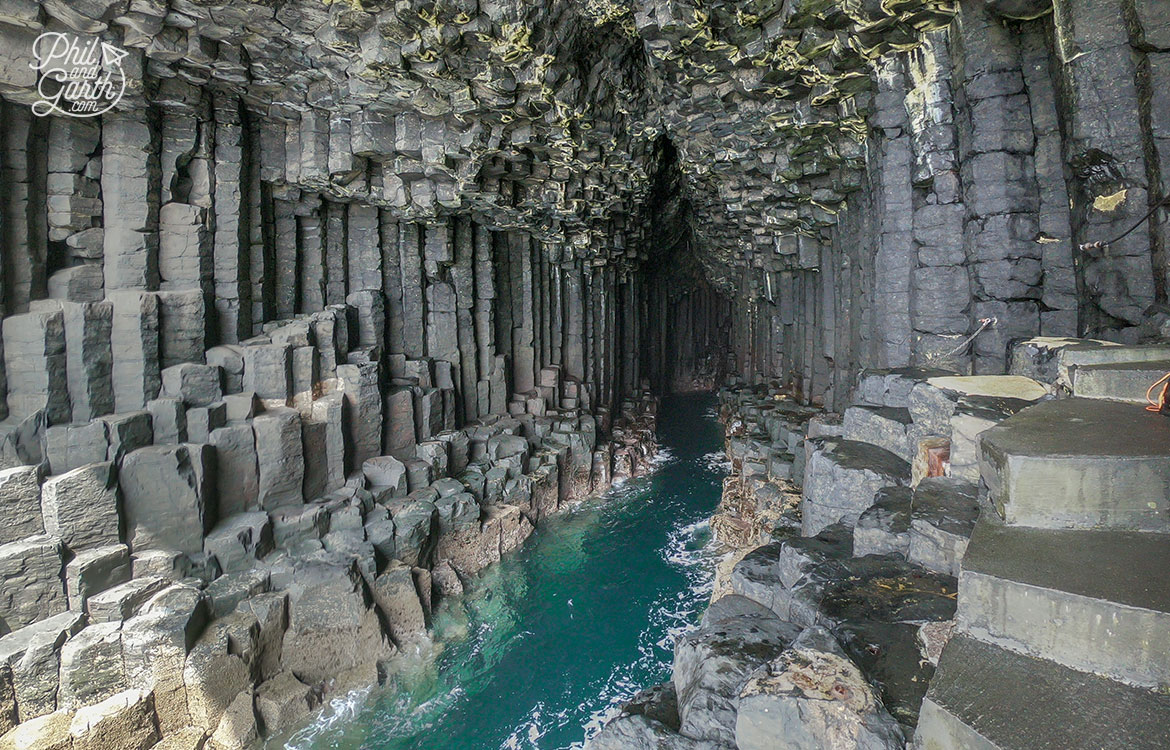 The incredible interior of Fingal’s Cave, Isle of Staffa

This unspoilt and uninhabited island is best known for Fingal’s Cave, it’s a spectacular site – a natural cathedral-like grotto. The ceiling inside really is as tall as a cathedral and the acoustics sound eerie. Sadly due to storm damage we couldn’t go all the way in but we were able to take a good peek inside from the entrance of the cave, make sure you watch your step and have suitable footwear as it’s very wet and slippery.

The romantic German composer Felix Mendelssohn was inspired by the echoes of the sound of the waves crashing inside the cave, he wrote “The Hebrides Overture” in 1830. Fingal’s Cave then became a tourist attraction and Jules Verne also mentions it in his book ‘Journey to the Centre of the Earth’. Our skipper played an extract of the music as the boat first approached the island to take a look at the cave, magic! The entrance to Fingal’s Cave A pod of dolphins join us as we leave Staffa

Leaving Staffa we looked back at this remarkable island and were suddenly accompanied by a pod of dolphins catching the swell from boat, a real wow moment! Puffins on The Isle of Lunga, part of the Treshnish Isles

The next part of our tour was our highlight – to the Isle of Lunga, the largest of the Treshnish Isles. The summer months are the best time to visit Lunga to see the large puffin colony where thousands of puffins flock here to breed. There’s also guillemots, razorbills, fulmars, shags, kittiwakes and more – a huge variety of seabird colonies estimated to be around 6,000 birds. Thousands of puffins in the sky

On the approach to Lunga the sky was full of puffins flying around criss-crossing each other as they carry mouthfuls of eels back to their babies in the cliffside underground burrows. Nicknamed ‘sea parrots’ they can fly thousands of miles in migration and dive down to 60 metres and can live up to 60 years old. By August after their babies have fled their nest the puffin colony will fly off for winter. Our Turus Mara boat ‘Island Lass’ on Isle of Lunga

After disembarking we walked from the shore to the top of the island, where suddenly we catch sight of orange beaks, it’s them! close-up, literally hundreds of puffins, we weren’t expecting to see so many. They are said to be amongst the tamest of seabirds, which means if you are quiet and respect them you can get within a couple of metres. We first thought about strategies – what’s the best vantage point? how do we approach them? and how close can we get?  We soon realised the best way is to find a spot near the cliff edge, crawl on your hands and knees to get close and just wait.  Take extra care not to disturb their burrows which are hidden in the grass. Puffins with their distinctive bright orange beaks and feet Isle of Lunga, can you spot all of the puffins? 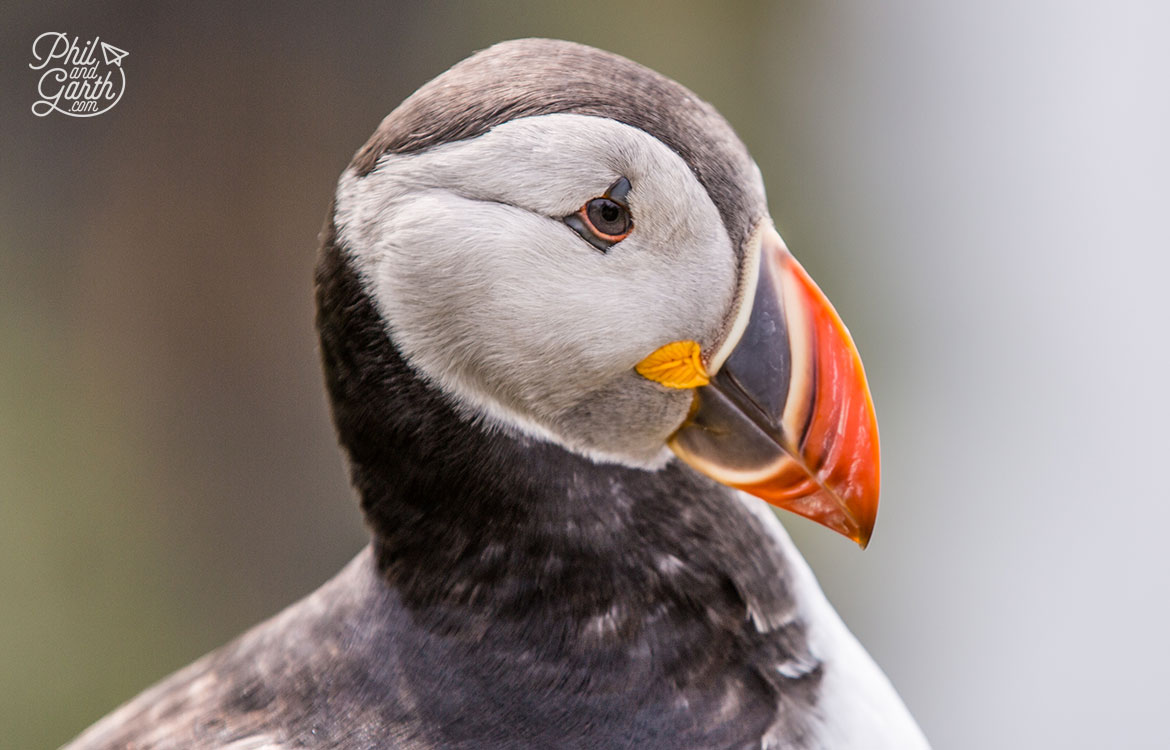 How cute are their faces? A parent catches eels to feed their young 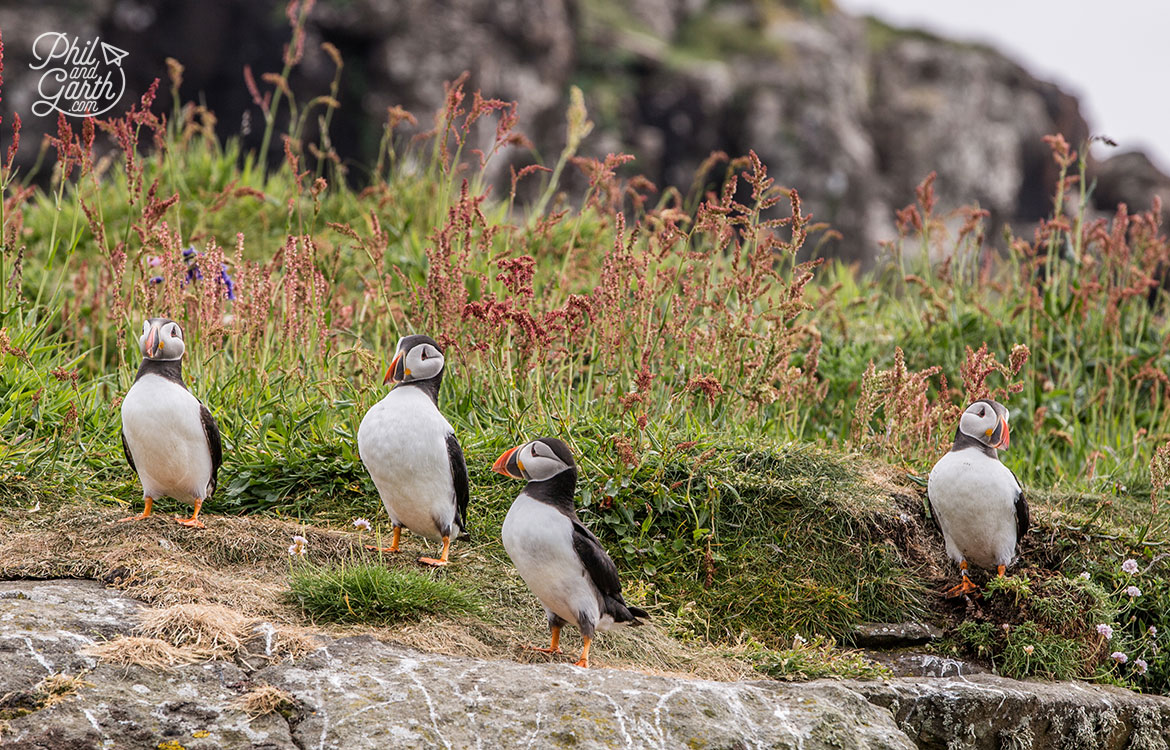 The puffins are so tame, not phased by us at all 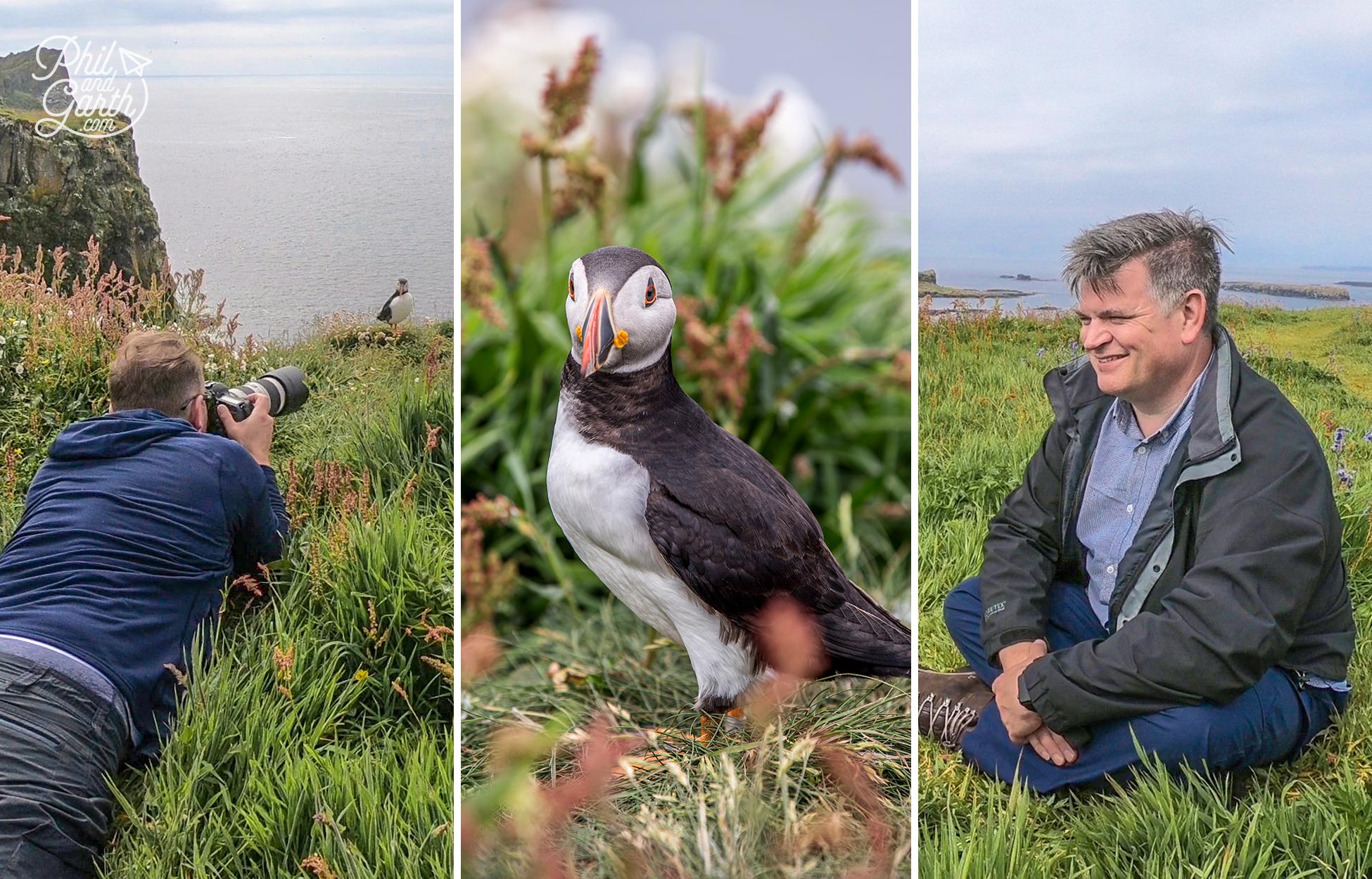 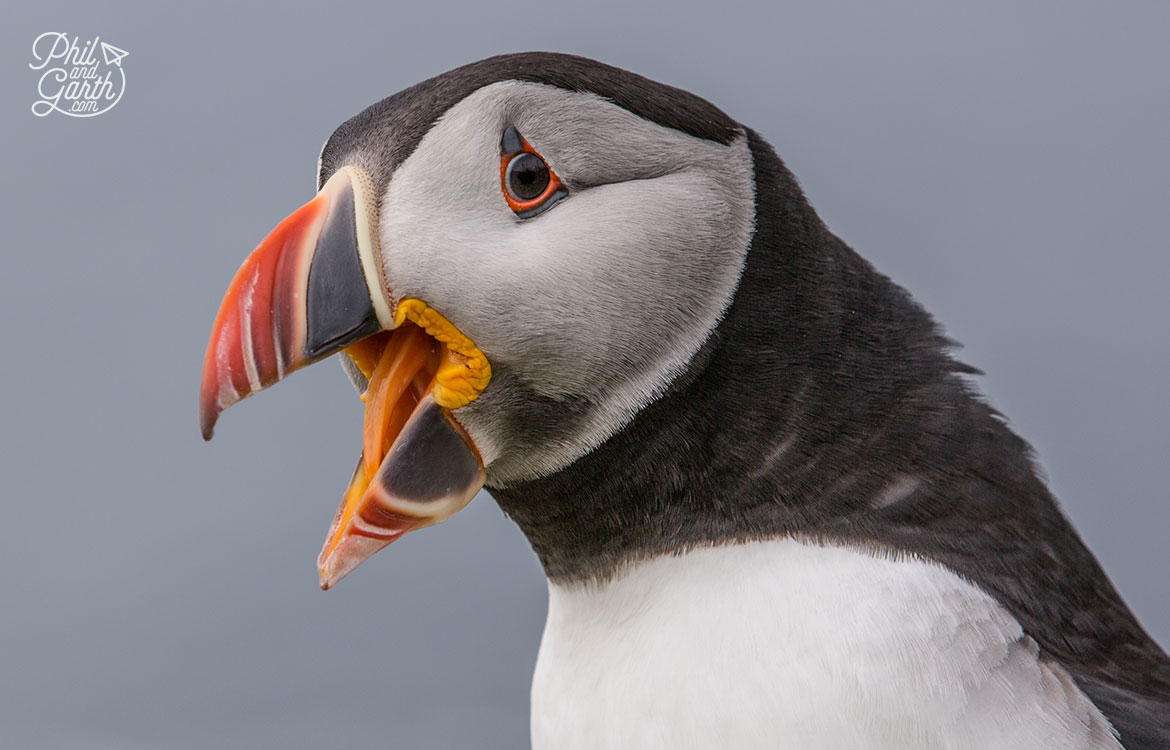 Close up of these comedic looking birds, they have a clown-like black stripe over each eye 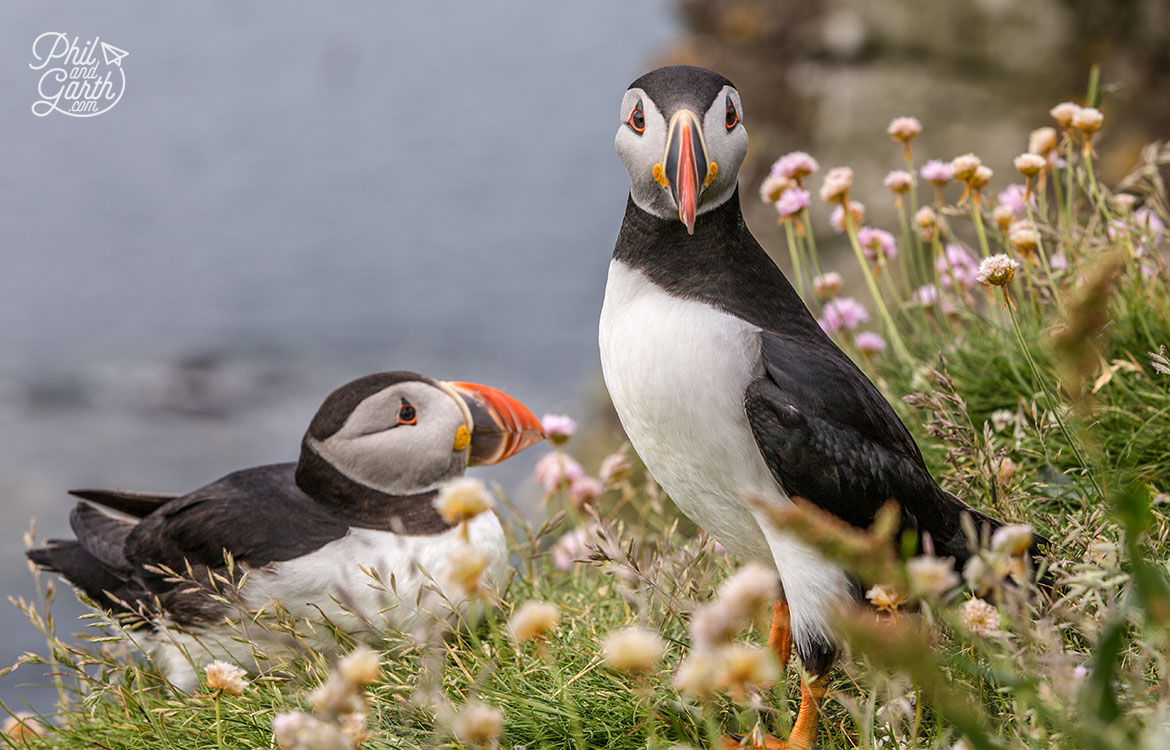 We loved watching them and taking photos as they posed for us, they do look somewhat comical and are proper show-offs as you watch them frolic around. It was a real privilege to see them up so close. Group of Puffins perched on the edge of the cliff This fella was all on his own

The tour company also run trips called ‘puffin therapy’ where psychologists take clients to Lunga to spend time in the wild with the puffins and relax and reconnect with nature. It’s true they had a very calming and therapeutic effect on us. 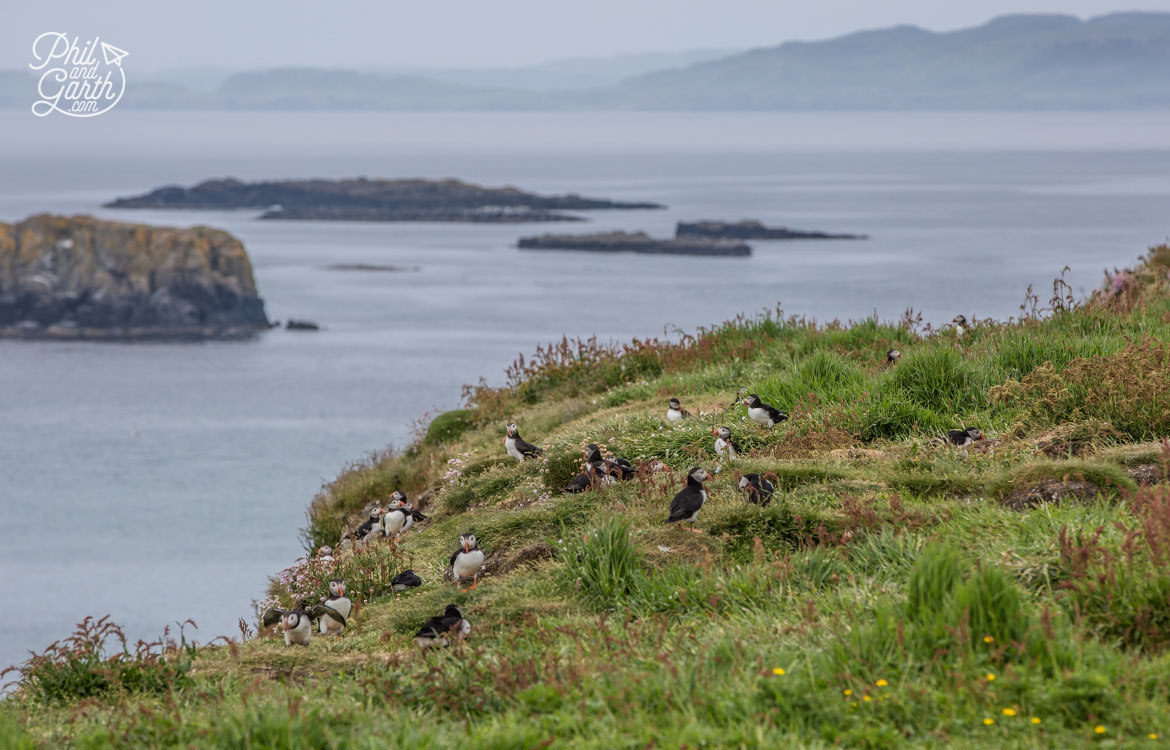 Hidden in the long grass – Puffins nest underground in burrows. Gorgeous scenery on the way back to the Isle of Mull

On the way back to Isle of Mull we past some salmon fish farms and more wildlife – this time grey seals and their pups, especially common in June when we went. We loved this trip it’s perfect for wildlife, nature lovers and photographers. In fact there were many professional photographers in our group with a variety of massive lenses. 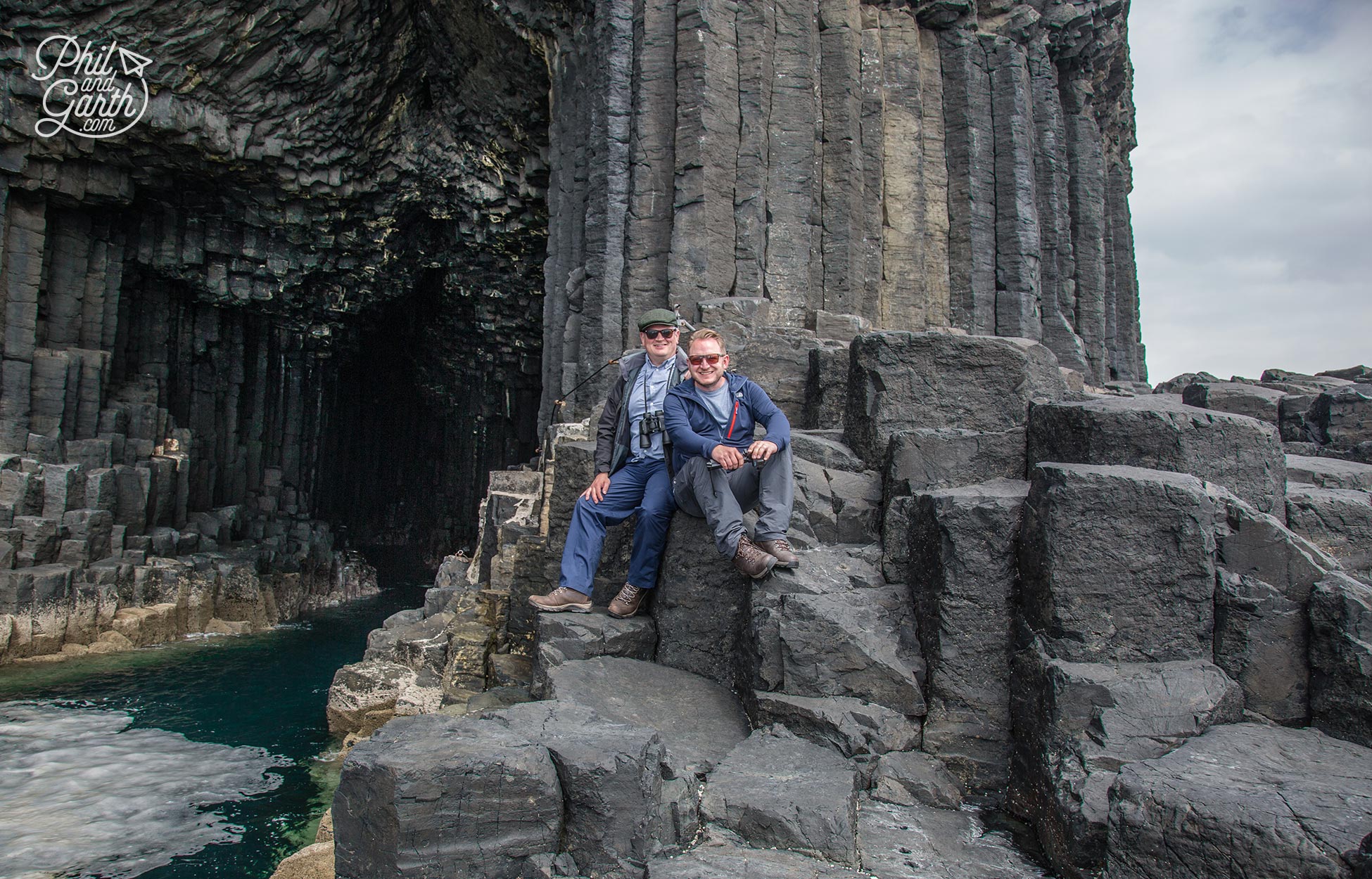 Phil and Garth on The Isle of Staffa

We paid for the tour operated by Turus Mara however instead of booking directly, we booked their tour and ferry to Isle of Mull from Oban with Caledonian MacBrayne. Worth noting sea conditions and weather can change suddenly so the tour can be cancelled – however you should be able to take it the next day.

Gibraltar Travel Guide – What to see and do in a day

Scotland’s Dramatic Scenery on The Isle of Skye

How to see the Scottish Highlands in 7 Days

Wow! What a beautiful nature – it reminds me of Iceland a lot! I want to go to Schotland so badly, but the Isle of Staffa was not on my bucket list till now! Thanks for sharing! #FeetDoTravel

Those puffins — oh my! Your photos of them and of the landscape are so clear. Just stunning!

Far out, the hexagonal columns on Staffa are mindblowing! A natural coastal auditorium. The puffins are gorgeous. Getting so close is amazing. I particularly love the shot with the fish hanging out of one of their mouths. Awesome experience. 🙂

Oh wow! I didn’t know that Scotland also had a Giant’s Causeway! I bet it was way less touristy than Ireland’s! And I’ve been studying your Scotland posts as we’re headed there for a few days next month! I wish we had time to squeeze this in, or see some puffins! Next time! #FeetDoTravel

We are headed to Scotland soon but I don’t think we will make it to any of the islands. I love the shape of the pillars here and, of course, the PUFFINS!!